Today we turn to Arthurian lore to look at a strange creature known as the Questing Beast, or Beste Glatisant (“barking beast”) in French. This animal is usually described as having the head of a snake, the body of a leopard, the haunches and tail of a lion, and the feet of a stag. 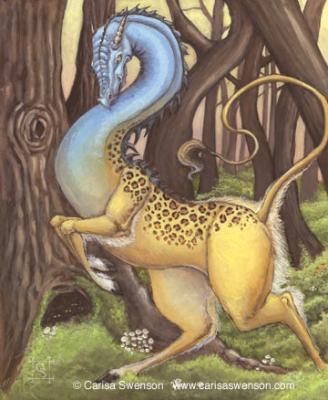 Its arrival is announced by a sound inside its belly like that of a pack of hounds going after a quarry, hence its French name. In fact, since the term “quest” could originally mean barking in English, its name is a pun. Not only does it sound like dogs on a quest, but knights quest after it. The most famous chaser of the Questing Beast is King Pellinore, but other legends associate it with Sir Perceival and Sir Palomides. An early account in the thirteenth-century Perlesvaus describes the beast quite differently, making it white in color and between the size of a hare and a fox. Here, Perceival finds out that the source of the barking is a litter of violent offspring, which kill the beast upon being born. The beast is identified as a symbol of Christianity, and the offspring of the Jews. Later accounts made the symbolism less painfully obvious, but it was sometimes identified with incest. Thomas Malory identified the creature as the offspring of a princess who wanted to have sex with her brother. She made a deal with a demon, but the evil being tricked her, so that she ended up having sex with the demon and accusing her brother of rape. The king had his son torn apart by wild dogs as punishment, and that’s why the monster has the barking sound in its belly. Arthur sees the beast drinking from a stream soon after unknowingly being seduced by his own sister. Pellinore shows up and explains that it’s his mission in life to hunt the beast, and Merlin correctly identifies the monster’s appearance as an omen of the fall of Arthur’s kingdom at the hands of his own son Mordred.

Palomides, the Saracen knight, is sometimes identified as having finally killed the Questing Beast. As described in this post I came across recently, Palomides is alternately described as Babylonian and African. The term “Saracen” usually meant a Muslim, but Arthur is usually thought to have lived before Muhammad. Some accounts of Palomides say that he wasn’t able to slay the beast until after he converted to Christianity.

In T.H. White’s The Once and Future King, which gives a more humorous take on some aspects of the Arthurian legend, Pellinore explains that his family has been hunting the Questing Beast for generations. His best friend Sir Grummore convinces Pellinore to give up the quest, but the beast gets lonely. Later, Grummore and Palomides dress up as a beast in order to cheer up Pellinore, but the original beast finds the costumed knights and falls in love with what it sees as another of its species. This is why Palomides is associated with the beast, a much more benign take on this than the earlier explanation that the beast had killed some of Palomides’ brothers. Indeed, White’s version of the quest makes it more of a game, with Pellinore and the other knights not actually wanting to catch the creature. I have to wonder if that was influential on the relationship between Sir Hokus and Evangeline the Dragonette in John R. Neill’s The Wonder City of Oz. Hokus is seen in earlier books as wanting to kill dragons as soon as he sees them, but Neill makes his chasing of them a much friendlier affair.

1 Response to The Questing Game