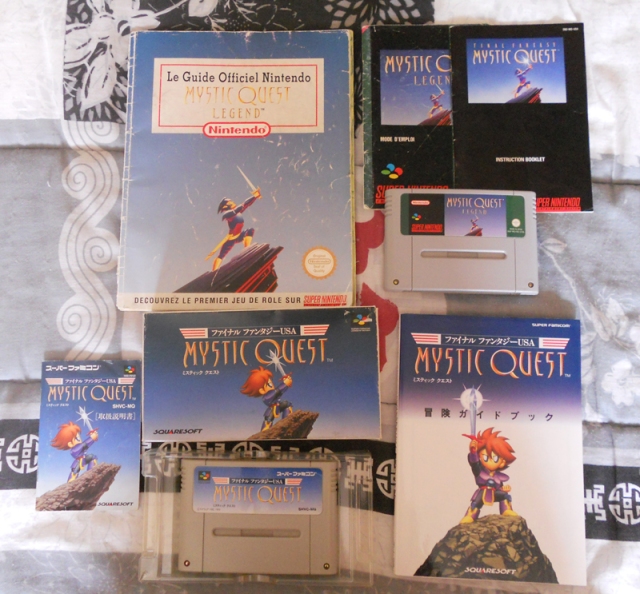 Picture by SlyShinie
Final Fantasy: Mystic Quest has long been criticized for its simplistic nature, but that doesn’t mean some of us don’t have a soft spot for it. Recently, I came across this post defending the game, and it reminded me that I quite liked it myself. Yes, it’s clearly intended as a role-playing game for beginners, particularly children. Really, though, what’s wrong with that? It’s still fun, after all. The aspects that make it easier include monsters being visible on the screen instead of wandering around invisibly, much less of a choice in the way of equipment and magic spells, and a set path to follow on the map screen (which is also true of Chrono Trigger, come to think of it).

You can also save the game anytime, and if you lose a battle you can try it again from the beginning. That doesn’t mean it’s always easy, however, particularly as it also has more puzzles to solve than many RPGs. Although the battles are turn-based, there are a few action/adventure elements, particularly in the way you can interact with your surroundings. You can jump, throw bombs, climb certain walls with a claw, and cross gaps with a grappling hook. No monsters appear on the map screen, but there are battlefields that you can use for grinding. They get a bit tedious sometimes, but don’t try to tell me leveling up isn’t tedious in more grown-up RPGs as well. And one aspect to the game that everyone seems to love is the music, which includes some metal guitar.

The plot and setting are sort of condensed versions of the other FF games up to this point, with each of four lands associated with one of the classical elements, and a crystal and boss monster for each. The power of the crystals is draining, bringing destruction to the land. You know the drill if you’ve played an early FF game. The towns are pretty small, but each has its own unique style. You can only have one ally at a time, and this is determined by the story rather than by the player’s choice.

The first is Kaeli from Foresta, a nature-loving girl who can talk to trees and has a father who’s a sea captain. 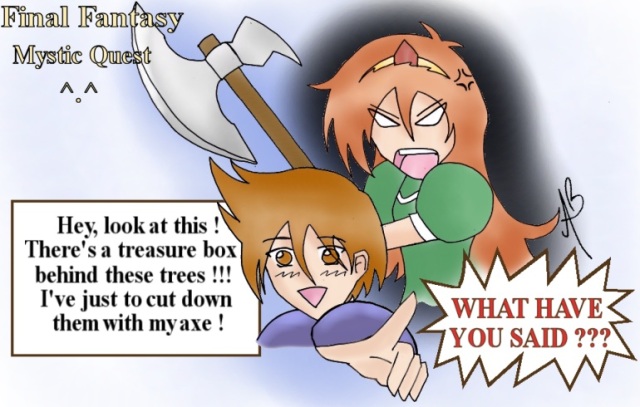 I seem to recall reading that her name came from someone on the staff, but I’m not sure about that. She’s apparently called Karen in the Japanese version. Nowadays Kaeli is one of those trendy names, like all the rhyming ones ending in “-aden,” but I don’t know that it was back then. Another ally, Phoebe, lives with her grandfather in Aquaria, and uses a bow and arrows. And Reuben makes his home in Fireburg and fights with a morning star. Oddly, the final ally doesn’t come from the town of Windia, at least as far as we know. Rather, he’s a wandering treasure hunter and mercenary with a bad-ass attitude but a soft heart, a type we’ve seen many times in these games. His name is Tristam, and he’s really the only ally who has much of a personality at all. He’s also the only one who doesn’t live with a parent or grandparent, an aspect to these characters that might well have been meant to appeal to children. Since the game starts with the hero Benjamin seeing his home village destroyed, does that mean his parents died as well? I don’t recall it ever being specified, and he doesn’t seem too shaken up about it if such is the case. 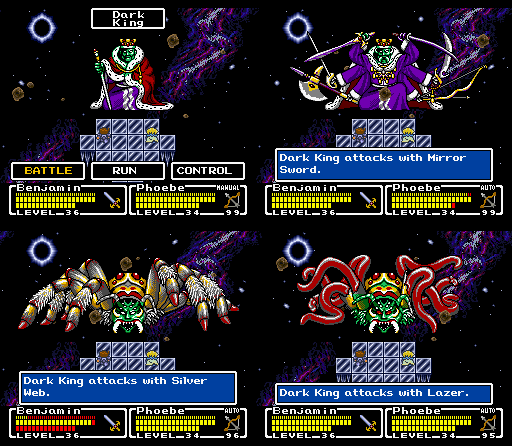 The final boss is the Dark King, no relation to the Dark Queen from BattleToads as far as I know, although that might make for a good story. 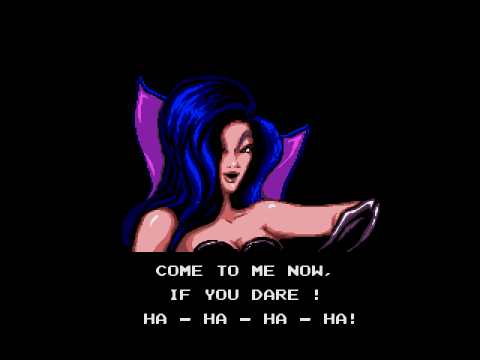 The end of the game has Benjamin and Tristam sailing off in search of further adventures, but we never learn what happened to them. This is one of few RPGs in which you don’t explore the entire world in the course of the game, so who knows what they might have found?