Cats and Dogs Living Together 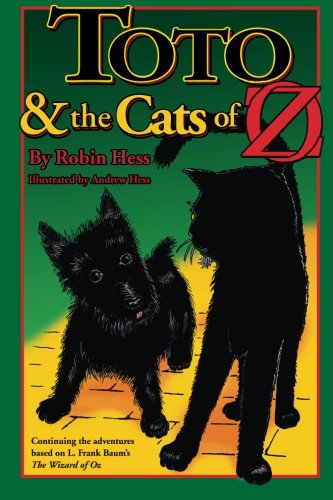 Toto and the Cats of Oz, by Robin Hess – I remember meeting Robin at an Oz Convention in the late nineties and hearing about this story, so it’s obviously been around for quite a while already, but wasn’t published until recently. It concerns a group of cats that rebels against Ozma’s rule and takes Toto hostage, allegedly because cats aren’t receiving enough representation, but there’s more to it than this. The main villain, Joom, was originally intended to be Mooj from Ojo in Oz, but since that book is still under copyright, this isn’t spelled out. Instead, Joom is identified as the sorcerer who enchanted Prince Bobo of Boboland, as per Rinkitink in Oz. Mind you, it’s certainly possible that Mooj performed this enchantment as well, although it has nothing to do with clocks. Joom appears in this book as a shape-shifting cat and the mastermind behind the rebellion. The story meanders a bit, but overall is quite enjoyable, with appearances from many familiar characters. There are also callbacks to Hess’s earlier Christmas in Oz, with Santa Claus and his workshop in Christmas Valley playing a significant role. Among the feline rebels are a tough cat with a soft heart named Alexander, and the ginger orator Honey Cat. Another new character is the Spelling Bee, which obviously made me think of The Phantom Tollbooth, although Hess adds another pun by making the Bee skilled at magic.

5 Responses to Cats and Dogs Living Together