Even in the Most Encroaching of Darkness, There Is Always, Always Oz

I’ve managed to get my hands on a few Oz books recently. In fact, I still have a few more to go. The ones of this batch that I’ve read so far are about as different in tone as possible, really. 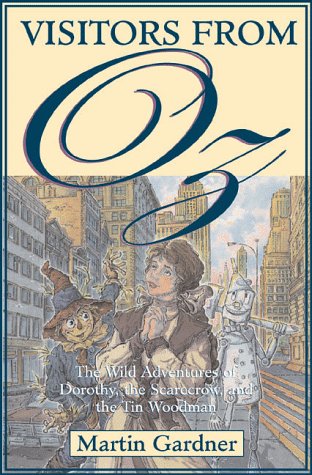 Visitors from Oz: The Wild Adventures of Dorothy, the Scarecrow, and the Tin Woodman, by Martin Gardner – This one was published back in 1998, and had much better distribution than most recent Oz books, but the reviews made me loath to read it. For some reason, it was only last month that I got the idea to look for it at the library. I’ve admired Gardner since reading The Annotated Alice back in my childhood, and I know he was a lifelong fan of Oz. Unfortunately, while there was some potential to this story, I don’t think it really lived up to it. The plot involves a movie producer named Samuel Gold who manages to get into e-mail contact with Glinda, and she agrees to see if Dorothy and her friends will visit the United States to promote a film Gold is making. Why they’d show up for him and not any of the other people who have tried to promote Oz over the years, I couldn’t say. Since Oz has been separated from our own Earth since the time of The Emerald City of Oz, and magical transportation between the two is impossible…wait, since when is this the case? Glinda did make Oz invisible at the end of Emerald City, but this pertained only to the land surrounded by the Deadly Desert, not all of fairyland. Also, there are plenty of examples of magical transportation between the mundane and fairy worlds in books later than Emerald City. Gardner seems to have wanted to use a non-orientable object called a Klein Bottle to get Dorothy to America, and disregarded prior continuity in order to utilize this device. A lot of this book appears to have been stuff Gardner wanted to address, but couldn’t convincingly fit into the plot. Dorothy and her companions visit Wonderland and meet its citizens, but pretty much all they do is explain how Lewis Carroll made them out to be a lot crazier than they really are. There’s a pointless diversion involving an ursine detective named Sheerluck Brown (yet another private detective in Oz, although he claims to be the only one) and a giant called Big Jim Foote, which actually might be the most amusing part of the story. When the visitors reach the States, they meet with celebrities like Oprah and Rudy Giuliani (the Mayor of New York at the time). In order to add some conflict, there’s a rival producer named Buffalo Boggs who has mob ties and severe body odor in place of any actual characterization. He sends some stereotypical Italian mobsters to kill the Ozites, apparently just so he can ruin the promotion for his competitor’s film. There’s also a bit where Dorothy takes down a stereotypical Muslim hijacker with help from the Pearls of Pingaree. The introduction of the Pearls is another thing that doesn’t really make sense, as the story explains that the King of Pingaree gave them to Glinda. So a small, vulnerable island nation gives up its only magical protection to someone in a country full of magic? Maybe it’s a comment on superpower politics, but I’m inclined to think Gardner just wanted to show the Pearls working in America and didn’t bother to come up with a convincing way to put them in. So, yeah, this could have been a lot better.

Father Goose in Oz, by Donald Abbott – Another one that was published some time ago, but I didn’t pick up sooner due to negative reviews. Actually, it wasn’t this book in particular that was negatively reviewed, but Abbott’s Oz books in general. Having now read a few of them, I find them slight but still fun. Unfortunately, some of these books are now out of print, but I did manage to find this one on eBay for a fairly low price. I’m still looking for copies of Magic Chest and Amber Flute that don’t cost a fortune. Father Goose: His Book was L. Frank Baum’s first successful children’s book, and Abbott finally brings the character to Oz (an idea that I’d previously seen suggested on one of Fred Meyer’s holiday cards). He’s accompanied by a goose named Bilkins, who’s technically a gander, despite presumably being named after Mrs. Bilkins from the Our Landlady columns. Bilkins uses Father Goose’s magic pen, which can make anything come true as long as it’s written in rhyme, to bring the two of them to Oz. At the same time, he accidentally revives the Wicked Witch of the West. Like many of Abbott’s stories, this one takes place in between Wizard and Land, during the Scarecrow’s reign in the Emerald City. I always figured the Scarecrow, Tin Woodman, and Cowardly Lion hadn’t seen much if any of each other during this time; but according to Abbott they had quite a few adventures together. Hey, I can’t say it actually contradicts anything in the original books, as far as I can remember. Anyway, our heroes successfully fight off both the Witch and the Kalidahs. Like I said was typical of Abbott’s work, it’s not deep, but it’s an enjoyable enough read. 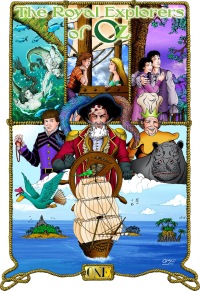 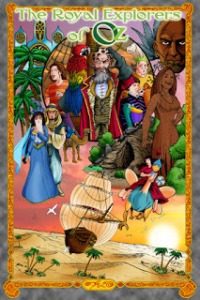 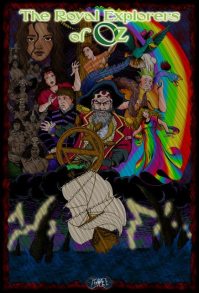 The Royal Explorers of Oz, by Marcus Mebes, Jeff Rester, and Jared Davis – I guess you could say I had a hand in this trilogy, if a rather small one, as Marcus said the idea was inspired by a post I wrote about the continent of Tarara from Ruth Plumly Thompson’s Captain Salt. This is largely a sequel to that book, about the voyage of the captain and his crew around the Ozian continent, out into the Nonestic Ocean, and back to Tarara. The first book, Voyage of the Crescent Moon, has the crew visiting many previously explored countries, and incorporates characters and situations from the three authors’ other works. Prince Bobo of Boboland, portrayed in a short story of Jared’s (which is incorporated into the book) as rather stubborn and stuck-up, is forced to join the crew. Crescent Moon Over Tarara involves the return to Tandy’s homeland, only to find it changed a lot over the years. Captain Salt becomes obsessed with chasing after some rare animals, and has to fight some magical predators known as kurays (they and their creator are references to a rather rude poster on Oz message boards). This one gets pretty dark, but it’s dark Oz done right, being consistent with the original series (well, minus a few minor points from Captain Salt) instead of negating it. The final book, Terra Obscura, gets even darker, when the characters visit an alternate dimension lacking sunlight and full of creepy monsters. They find themselves dealing with death, something most of them had not experienced in a long time, if ever. There is a glimmer of hope at the end, however. There are some revelations about the great powers in the Ozian universe, including that King Anko is the brother of the Rainbow and husband of Queen Aquareine. He’s also a shape-shifter, and while the form he takes in The Sea Fairies is his favorite, he has others that are more awe-inspiring. I suppose he’s unable to increase his length, though. I appreciate the callbacks to many other Oz stories and related works, both canonical and otherwise.

19 Responses to Even in the Most Encroaching of Darkness, There Is Always, Always Oz