How to Succeed in Ozian Politics

When Benny, the living statue from Boston in Ruth Plumly Thompson’s The Giant Horse of Oz, arrives in Oz, he asks the Scarecrow if the country is a republic. The straw man replies, “Indeed not! We are a magic monarchy under the beneficent rule of a little fairy.” For the most part, the rulers of Oz are absolute, but that doesn’t mean the people never have any say in who rules over them. In John R. Neill’s Wonder City, Ozma herself organizes an election (or “ozlection,” as Professor Wogglebug calls it), with newcomer Jenny Jump running against her for the position of Ruler of Oz. People who have read Neill’s earlier drafts say that this element wasn’t actually Neill’s at all, but rather that of the editor. Regardless, it comes across as quite weird, especially since Ozma doesn’t seem to have any choice in her position when she learns about her heritage in Land. Glinda tells her, “But you were born a girl, and also a Princess; so you must resume your proper form, that you may become Queen of the Emerald City.” In Wonder City, however, Glinda seems to have no problem with the ozlection, perhaps because she doesn’t think Jenny has a chance of winning anyway. Eventually, the Wogglebug decides that, for Jenny to have a shot at all, the ozlection should be left up to chance. The people line up, and each one weighs himself or herself on a scale, with the number of pounds they weigh counting as that many votes for either Ozma or Jenny. The voters alternate between scales, having no say in which contestant they end up voting for. Oddly, Polychrome gets to vote, despite not living in Oz. And plenty of Ozites presumably don’t vote, as the total only adds up to 3,201,080 pounds. Sheesh, Loxo the Lucky probably weighs that much by himself. Don’t the giant citizens get to vote? Regardless, Ozma does win, and Jenny is made a Duchess as a consolation prize.

At one point, it’s announced that the victor will rule for the next thousand years, which makes me wonder if there will be another election around 2940 or so. We obviously won’t be around to see it, but Ozma presumably will.

The ozlection is definitely an oddity, but elections in Oz are not totally unheard of. There are several examples, particularly within the original L. Frank Baum books, of residents of a community being allowed to choose a ruler. It’s usually a quite informal process, however. This trend begins with the Tin Woodman, whom the Winkies like so much that they invite him to be their new monarch.

Mind you, the invitation only comes from the Winkies who happen to have been serving at the Wicked Witch of the West’s old castle, who might not be a representative sample of the entire nation. It’s certainly possible that there was a more formal confirmation process after this, but who knows? Nick Chopper considers himself ruler of the entire Winkie Country, as evidenced by his trying to pull rank over the citizens of Bookville in Hidden Valley, not that the Book of Royalty accepts his claim. Then there’s the King of Bunnybury in Emerald City, who tells Dorothy, “I didn’t want to be King of Bunnybury at all, and the rabbits all knew it. So they elected me–to save themselves from such a dreadful fate, I suppose–and here I am, shut up in a palace, when I might be free and happy.” The rabbit eventually realizes that he’s grown accustomed to the perks of being king, but what’s significant here is that the bunnies not only elected their ruler, but the guy they elected didn’t even have to consent to it. In Scarecrow, after King Krewl of Jinxland has been deposed, the Scarecrow calls for an informal election for the new ruler, where the people just call out the name of the monarch they want. They at first call for the Scarecrow himself, but after he refuses (hey, the King of Bunnybury didn’t have that option!), they select the daughter of a previous ruler.

Old habits and dynasties die hard, I suppose. The Skeezers in Glinda vote for Lady Aurex, a courtier for the former Queen Coo-ee-oh, as their new ruler.

Even the nasty Awgwas in The Life and Adventures of Santa Claus have somewhat of a democratic process, choosing their king based on who can come up with the most evil idea. There’s also a mention in the short story “The Queen of Quok” of a place called the Republic of Macvelt, which James E. Haff and Dick Martin’s map places on the same continent of Oz. No details about this place are divulged, but I only recently learned what was probably obvious at the time Baum wrote the story, which is that it was named after President William McKinley and Vice President Theodore Roosevelt.

Thompson’s Oz books tend not to show many signs of democracy, instead preferring dynastic succession, appointment from above, or fulfillment of prophecy. Interestingly, one of the few times we see people playing any part in the selection of their ruler is with the unpleasant Uns in Cowardly Lion. Nickadoodle explains that the Uns spend much of the day shouting out their wishes, and I-wish-I-was was made king because “he could wish faster and shout louder than any of the rest.” This is somewhat reminiscent of Loonville in Tin Woodman, where Bal is made king because he has less common sense than any of the other Loons.

And the Whimsies chose their chief “merely because none among them was any wiser or more capable of ruling.” Anyway, Nickadoodle also knows of a prophecy that, if the one good Un becomes king, all the others would have to reform, and this is fulfilled through magic and Ozma’s authority.

There are examples throughout the series and related books of leaders taking power in unusual ways, or having unusual governing systems. I’ve already mentioned the odd succession law in Noland that resulted in Bud becoming king, although it’s specified that this method is only used if the old ruler dies without an heir.

There are elections held in the Blue Country of Sky Island, but the process is actually a sham and the current Boolooroo really chooses his own successor. Each Boolooroo is entitled to rule for 300 years. In the same island’s Pink Country, the person with skin of the lightest pink becomes the ruler. Traditionally the king or queen is able to make and interpret laws, but has to live in poorer conditions than anyone else in the country. Trot changes this law to say that the ruler can have just as much as anyone else, but no more.

The High Coco-Lorum of Thi manages to hold on to power by not calling attention to it, presenting himself as simply a judge and adviser instead of a ruler. King Gugu and his counselors “hold their high offices because they are more intelligent and more feared than their fellows.” 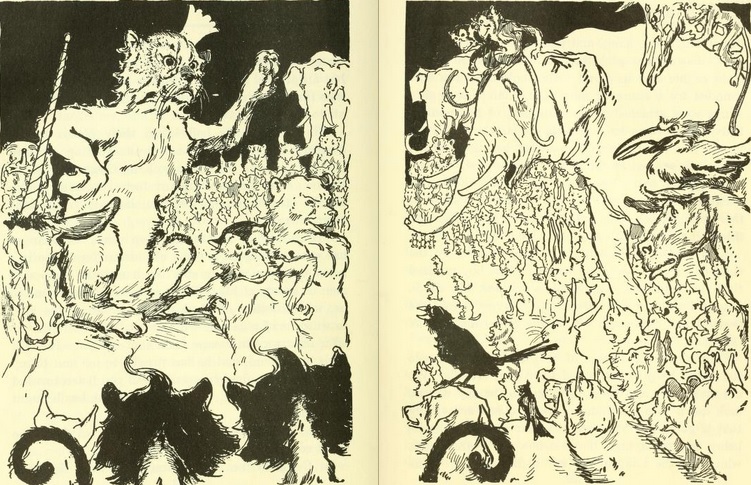 I guess this is technically the case pretty much anywhere, but it is perhaps telling that the animals don’t even attempt to to find a legal justification for their leadership. The King or Queen of Patch is chosen by the Spool of Succession, which grows on a tree and unravels to point out the next ruler.

The Queen at the beginning of Gnome King is Cross Patch VI, but it’s not clear whether she’s the sixth Cross Patch to rule the kingdom. Considering that the Quilties come back to life ten years after going to pieces, it’s possible the number indicates that she’s on her sixth incarnation. Thompson’s short story Land o’ Patch, written before she decided to bring the titular country into Oz, indicates that a King Cross Patch who was half witch and half fairy was once the ruler; he might well have been related to the queen of the same name. During the course of Gnome King, the Spool comes to rest at the feet of the Patchwork Girl, who then becomes Queen of the Quilties. The laws of Patch say that the Queen has to work harder than anyone else in the country, however, so she hates it. The Wizard of Oz later finds that the Spool was actually indicating Ozma’s palace mender Susan Smiggs. If we’re taking “Land o’ Patch” into account, then apparently the ruler once had more power. Perhaps it was Cross Patch’s carelessness with orders that led to the monarchy being reduced to manual laborers. Ozma does promise to modify the laws at the end of Gnome King. The giant Nandywog seems to have become the de facto ruler of Tripedalia simply because the people there are afraid of him.

Septentria has an inherited monarchy, but they have no power whatsoever, instead being purely ornamental. The Prime Minister can do things, but only if the people allow it. There are other more subtle observations on political appointment and power, but I think I’ve covered the most prominent ones.

6 Responses to How to Succeed in Ozian Politics