Are you ready for another post about a being from Japanese mythology? If not, you can skip over this post. My subject of discussion here is the yuki-onna, one of the many yokai. I believe the “onna” part just means “woman,” and is shared by other female spirits. The yuki-onna is literally a snow woman, but whether she’s the ghost of a human woman who died in the snow or just a supernatural snowy being depends on the myth. They’re described as very beautiful but cold, with pale skin, black hair, and blue lips. Sometimes they also have no feet, although this is presumably not the case with the ones that masquerade as human for years. Then again, maybe some empty shoes attached to the legs would do the trick.

Picture by Malissaa
A yuki-onna will sometimes suck out the life force of a human it encounters, and some legends have it use a trick baby like the nure-onna. Instead of weighing a person down, however, this baby makes you freeze to death. I guess the moral here is never to accept a baby from a strange woman in the Japanese wilderness. The yuki-onna can also invade homes and freeze everyone inside, although some variations on this tale require her to be invited inside, a motif that also shows up in vampire stories. Sometimes men marry yuki-onna and have happy relationships and children with them, only to have the creature depart in the form of an icy mist once her true identity is discovered. At least one story has the monster actually melting when a man forces her to take a warm bath. The most famous yuki-onna story might be that of the woodcutters Mosaku and Minokichi, as told here on Myths Retold. That site is pretty funny, although I have to admit I find the broken-lines style a little hard to read. Anyway, to sum up, a yuki-onna kills the old Mosaku but spares the young and handsome Minokichi, whom I’ve seen variously identified as Mosaku’s son and apprentice. I suppose he could be both. She insists that Minokichi never tell about this experience, and later returns to marry him.

He doesn’t recognize her, but one night she reminds him of the ghost he encountered and he tells her about it, after which she leaves but spares his life again for the sake of their children. I have to suspect that these myths about being married to snow ghosts were started by men whose wives had rather frigid personalities, or perhaps just refused to have sex with them. It kind of seems like, if you’ve been in a successful relationship for years, it shouldn’t matter if your partner turns out to be made of magic snow. Then again, I guess it’s different if she had previously killed your father. 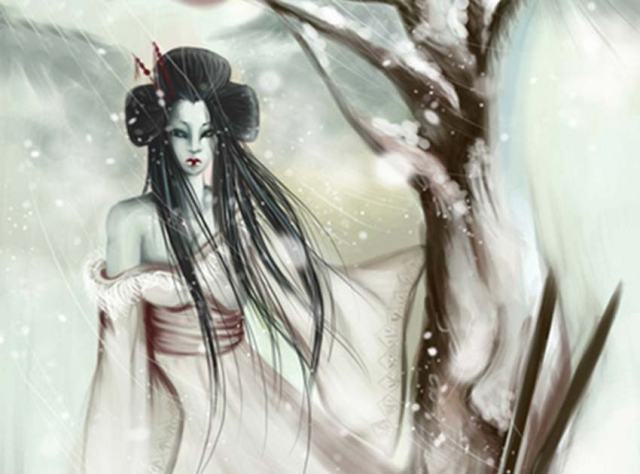 4 Responses to Be My Yuki-Onna