Poets Who Know It

One of the characters introduced in the 1902 stage play of The Wizard of Oz who wasn’t in the book was Sir Dashemoff Daily, the Poet Laureate of Oz. I’m not sure if it was L. Frank Baum or someone else who came up with the name, but I think it’s fairly clever, sounding noble and insulting at the same time. Dashemoff was a trouser role, a male character played by an actress, part of a tradition that might well have influenced Ozma’s transformation in The Land of Oz. The character arrives during the scene in the Munchkin Country, announcing the return of King Pastoria and falling love with Dorothy, who is portrayed as somewhat older than in the book. He writes the song “Carrie Barry” about her, mistakenly thinking that’s her name when it’s actually that of her neighbor. Although Dashemoff does remain in the play after that, it’s a little hard to tell exactly what he does. Descriptions of the plot in Mark Evan Swartz’s Oz Before the Rainbow and other sources give the impression that the characters often wander on and off stage for no particular reason, meaning that Dashemoff shows up with different people at different times. He helps Dorothy and her friends to escape when Pastoria has them jailed as Wizard sympathizers, but since she eventually returns home to Kansas, I guess they don’t end up together. While Pastoria is mentioned in Land and is introduced as a character in his own right in Ruth Plumly Thompson’s Lost King, and later authors have incorporated other characters from the stage play into more book-consistent scenarios (Donald Abbott, for instance, makes Sir Wiley Gyle the brother of the Wicked Witches of the East and West, and General Riskitt Pastoria’s half-brother), I don’t think anything has been done with the poet. Nothing that’s explicitly stated, at least.

Leaving Dashemoff behind for a minute, the Oz books are full of poets, or at least rhymers. Of the verse-spouting poet in Sky Island, Cap’n Bill says, “As fer po’try…that’s as how you look at po’try. Rhymes come from your head, but real po’try from your heart, an’ whether the blue parrot has a heart or not he’s sure got a head.” The Oz authors never pretend that their doggerel is anything for the ages, but it’s certainly fun. The main rhymer in the series is Scraps the Patchwork Girl, as Ojo adds some Poesy to her magical brains. There are a few books in which Scraps plays a significant role but doesn’t rhyme at all, but this is uncommon, especially when you take Thompson’s books into account. Not only does she frequently have Scraps show up just for the sake of some rhyming lines, but she introduces a lot of other rhymers as well. The most prominent of these are the Forgetful Poet Percy Vere, Snif the Iffin, and Pigasus, the latter of whom makes anyone who rides him speak in rhyming verse as well.

Rachel Cosgrove’s Hidden Valley has another rhyming character, the Rhyming Dictionary, who serves as the court jester to the Book of Royalty in Bookville. When he takes pity on a group of travelers locked up by the books, which includes Dorothy and other familiar faces, he helps them to escape and relocates to the Emerald City.

There’s also the Flittermouse from Merry Go Round, although his rhymes aren’t very good. When the Halidomians retrieve the first magic circlet, his verses improve, but not by that much.

John R. Neill’s Runaway deserves note because it’s here that we learn that Scraps hates to hear anyone else’s rhymes, as seen when she encounters Popla and the Twinkler.

While there’s no indication of this in earlier books, it doesn’t appear to contradict anything either, as we see her interacting only briefly with characters like Snif and Pigasus. She does seem to quite like the Rhyming Dictionary, but it’s not like Cosgrove would have been familiar with Neill’s manuscript. I would explain this by saying that she sees the Dictionary more as an assistant than as competition, while in Runaway she’s annoyed that the others don’t appreciate her skill and in fact have the same talent. At one point, she starts writing a book of poetry, and is annoyed when Popla and the Twinkler show no interest in it.

Runaway introduces another poetic character as well, although here it’s not Scraps who meets him, but rather Professor Wogglebug, Jack Pumpkinhead, and Jenny Jump. 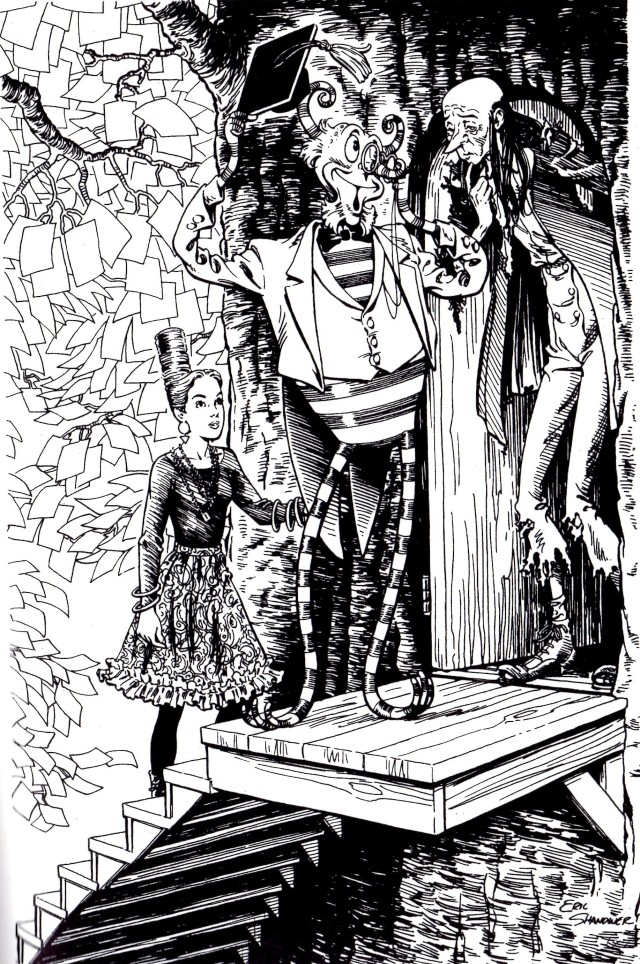 This tall, skinny man, who is bald on the top of his head but has long black hair beneath it (never a good look), declares himself “the greatest poet in all Oz.” He lives in a poetree, with the leaves being pages from his notebook with verses written on them. We never see any examples of his work, and he is never named. Could this be an older, more reclusive Dashemoff Daily? Also, during Eureka’s trial in Dorothy and the Wizard, the Tin Woodman quotes a rather insipid verse that he credits to “our great poet.” Obviously there’s no actual support for it, but the thought came to me recently that these three mysterious poets might all be the same person.

3 Responses to Poets Who Know It