For I Am One Thousand Years Old

What’s generally considered the canonical Oz series starts with The Wonderful Wizard of Oz, and then continues to describe events that occurred after that story. There have been prequels written, but not until long afterwards, so most of the history of Oz has to be garnered from descriptions in the books themselves. As I mentioned before, details are pretty scant on history before the arrival of the Wizard of Oz, but for ancient history they’re even worse. Ruth Plumly Thompson was rather fond of claiming that characters were about 1000 years old, which she did for Faleero, Ruggedo, King Ato, Wunchie (well, actually, she lived in the Munchkin Mountains for 1000 years, so she could have been alive and living somewhere else before that), and even Ozma.

What Oz was actually like back then is never specifically revealed, however. It’s quite possible that it was before the original enchantment of the land. I’ve pondered the question as to when Lurline’s enchantment took place, and Joe Bongiorno’s Royal Timeline of Oz holds that she cast two enchantments of sorts, one in the thirteenth century and one in the eighteenth. Oz was clearly inhabited before that, however, and while it may not have officially been a fairyland, it always had some magical properties. In Thompson’s Cowardly Lion, the stone man Crunch says that he was “hacked out by a primitive Oz man to decorate his cave,” then “buried for several centuries” before being excavated and brought to life by the Wizard Wam “several ages ago.” 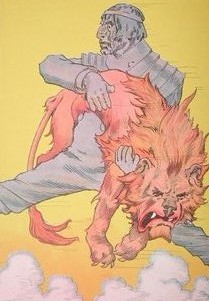 All of this is quite vague, but it suggests that Oz had human inhabitants during the Stone Age. On the other hand, there are cavemen living underground in modern Oz in Ozmapolitan, so who really knows? Wam, by the way, is said by Melody Grandy to have been born over 3000 years ago. Randy Hoffman once told me that he’d come up with a timeline that included the industrial revolution and other such events in Ozian history, but I don’t know the details. I have occasionally wondered how long the arrangement of Oz into color-coded lands has been the case. Phil Lewin’s Witch Queen indicates that the colors originated with the first enchantment, but there might well have been people who identified themselves as Munchkins, Winkies, Quadlings, and Gillikins before that. There’s a reference in John R. Neill’s Wonder City to a Munchkin baker’s boy having been missing for 984 years, but does that mean there was a Munchkin Country that long ago, or was that ethnic label applied retroactively? Back in 2002, I came up with a story idea that involved the Gillikin Country celebrating its millennial anniversary, and I still don’t THINK that contradicts anything else. Of course, founding dates for countries can be debatable anyway. I also decided that Faleero was banished from Burzee and Roquat was crowned Nome King in 1331.

Stories set in the Oz universe do make reference to events in the distant past, but most of them don’t involve Oz proper. The evil Zog in The Sea Fairies is 27,000 years old, and was at one point cast from the land into the ocean. I’m tempted to somehow link this with the sinking of Atlantis, which Plato claimed took place about 9000 years before Critias’ time, hence around the ninety-seventh century BC. Atlantis is actually mentioned in Dorothy and the Wizard as the home of the green dragon from whom the dragonettes are descended, said to have lived 20,000 years ago, “in a time when humans had not yet been created.”

Of course, there were humans 20,000 years ago, so the dragonettes were presumably partially mistaken. Or did L. Frank Baum think mankind was younger than modern science tells us we are? I wrote here about the magician Hiergargo’s construction of the Forbidden Tube being assigned to “the Year of the World 1 9 6 2 5 4 7 8,” which presumably can’t be taken entirely literally. The Royal Timeline sets this event to 32,709 BC, based on a calculation involving sexagesimal number systems. As far as more modern writings go, Chris Dulabone’s Lunarr and Maureen tells us that Montypuerto, the Sorceress of Cuubeville, disappeared 10,000 years before the events of that book.

And the parts of his Colorful Kitten set in the Kingdom of Pinkaree occur in the ninth century AD.

Pinkaree somehow disappears and ends up in Oz at the time of Dorothy and the Wizard, and is later visited in Grandy’s Zim Greenleaf. Whether it was already in Oz back in the ninth century isn’t clear. Zim claims that Pinkaree “disappeared, then reappeared in my atlas a few decades ago,” but doesn’t indicate whether it reappeared in the same physical location.

5 Responses to For I Am One Thousand Years Old