When Dueling Analogs featured this comic, they pointed out how weird it is when Mario is in running competitions with Sonic the Hedgehog. It’s the fastest thing alive against an overweight Italian plumber.

Shigeru Miyamoto once commented on why Mario is kind of chubby, explaining that it was due to the limitations of the system at the time. Sort of like why he has a hat, gloves, and a mustache because they’d show up better. The Super Mario Bros. Super Show made Mario pretty food-obsessed. The live action segments had pizza boxes lying around the room, and even the phone was shaped like a pizza.

In the cartoons, Mario was totally motivated by food, and he and Luigi even swore with types of Italian food. 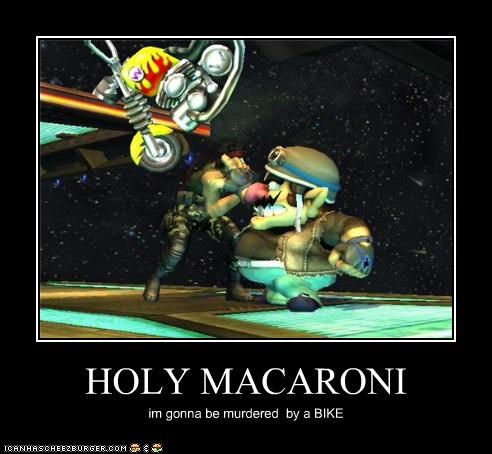 This was probably not simply because of the shape of Mario’s sprite, but because of the stereotype of Italians as hearty eaters. Not that I can blame them; I love pasta. And what about all the cakes that show up in the games?

Oddly, some media, like the Nintendo Adventure Books and the Super Mario Adventures comic in Nintendo Power, made beanpole Luigi the one who was always hungry.

I guess he must have had a really good metabolism. Of course, the original Luigi was just a pallet swap of Mario, but he was tall and thin and Super Mario Bros. 2, and that kind of stuck. Mario’s physique has never stopped him from being a master of jumping and acrobatics in general, though.

I have to suspect that has something to do with the physics of the Mushroom World, although that makes me wonder whether everyone there can make huge leaps. I mean, Bowser can, and he’s not only considerably bigger than Mario but has that heavy shell to contend with.

Which presumably means those characters WOULDN’T be able to maneuver like that when in our world, as they are in the Mario and Sonic at the Olympic Games series. For that matter, when they try to register and say they’re representing the Mushroom Kingdom, no one has a problem with that?