The Princess and the Frog – Beth and I saw this back when it was in the theater, but I only wrote a little bit about it then. This was Disney’s return to hand-drawn animation after a few computer-animated features, as well as the introduction of their first black princess. While this was overdue, it also meant Disney had to tread carefully to avoid being accused of racial insensitivity. I understand that Tiana’s name was originally supposed to be Maddy, but they changed it because it sounded too much like “Mammy.” I’d say that’s a bit of a stretch, but I like the name Tiana better anyway. Besides, as a white male, I probably don’t always catch such things. Prince Naveen was made purposely racially ambiguous, presumably because the film takes place in the 1920s (1926, according to a briefly glimpsed newspaper) when Louisiana had anti-miscegenation laws.

While I’m sure it’s not a spoiler to say Naveen ends up with Tiana, he initially intends to marry her rich white friend Charlotte. I think the oddest and possibly most offensive thing about the movie’s portrayal of race relations is that they pretty much ignored them. We do see black people struggling while the major white characters are well-to-do, but there’s no discussion as to why this is the case, and it never becomes an issue for anyone. You’d think that, if Tiana is mad at Naveen for never having to work a day in his life, there would be some tension between her and Charlotte, but there’s no indication of this. Perhaps this was the best way to go for a children’s movie, but it does seem to be whitewashing history somewhat.

Despite this potentially troublesome aspect to the film, however, I did enjoy it quite a bit. While sort of based on the fairy tale of the Frog Prince, it really only maintains the most basic aspect of a prince being turned into a frog and cured when kissed by a princess. Well, at least in some versions she kisses him. In the earlier ones, he changes back when she throws him. The credits also acknowledge E.D. Baker’s The Frog Princess, which puts a twist on the classic story by having the princess turn into a frog herself when she kisses the enchanted prince. I haven’t read it, but based on the description, it doesn’t sound like much else was borrowed from the book. It also gives a quite positive portrayal of New Orleans.

The main villain is Dr. Facilier, usually just called the Shadow Man, who uses voodoo in an attempt to achieve wealth and power. He’s voiced by Keith David, whom we actually just saw the other day. His shadow is capable of acting independently of him, adding an air of both creepiness and humor. The movie doesn’t present voodoo as entirely negative, either, as there’s also a friendly voodoo priestess named Mama Odie, who helps out the characters.

After being turned into frogs, Naveen and Tiana make their way through the bayou looking for someone who can break the spell, encountering a thin-skinned alligator named Louis who plays jazz trumpet and the Cajun firefly Raymond.

Ray’s main quirk is that he’s in love with the planet Venus, believing it to be another firefly. 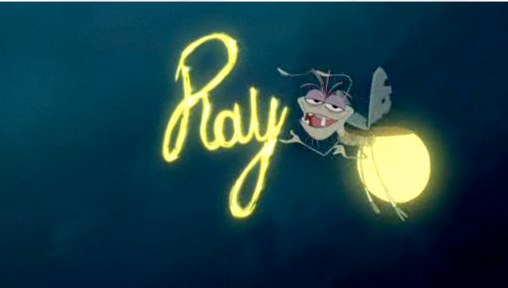 This is a rather bizarre trait, but there is a cute indication that the two of them can finally be together in his afterlife. Ray is killed by Facilier, who not long after is dragged to his own death by the voodoo spirits when he fails to live up to his part of his bargain with them. Tiana gets the restaurant she had been dreaming about, and Naveen remains in New Orleans to help her. I suppose we don’t know if he’ll end up taking the throne of Maldonia when his father dies. And Louis is able to play in front of people while remaining an alligator, so it’s a happy ending for most of the characters.