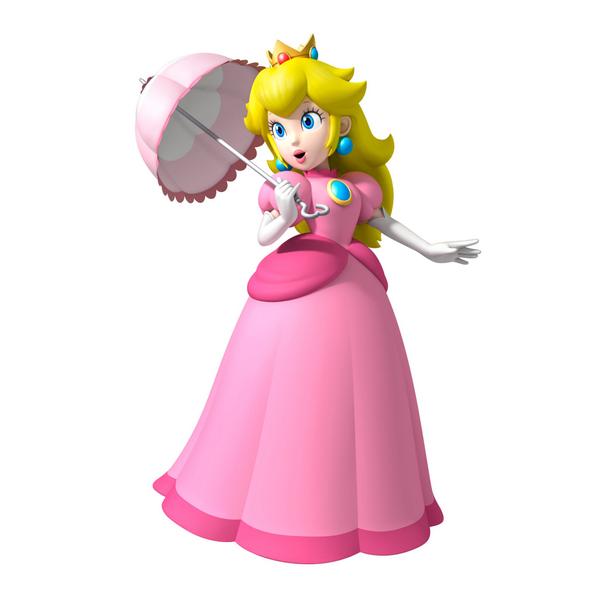 Picture by Slimu
Still, if Luigi got a year, the Princess might as well get a month. If she has it every year, she’ll eventually accumulate more time than Luigi had. And if there’s one thing Peach is good at, it’s waiting. The Princess is the most famous damsel in distress in the video game world, but what do we know about her beyond that?

This defense of the character points out that she seems to be vital to the survival of her kingdom. She is also known to have formidable magic. In a way, these glimpses at her character beyond simply being a girly girl and an object of desire for a turtle-dragon make it a bit worse that: 1) she’s always getting kidnapped, when it seems like she’s capable of defending herself; and 2) these traits are never developed that much.

Picture by Debbie Ha
I’m thinking back to how the Princess was portrayed in other media, and it seems like the writers often filled in the details themselves. I noticed how The Adventures of Super Mario Bros. 3 gave her a less whiny and more confident voice than in the Super Mario Bros. Super Show cartoons, and she became more of an active character along with it. Oddly, the writers’ guide for the series apparently claimed she was only seventeen years old, which presumably made her someone dealing with adult responsibilities while still quite young. I can’t say they ever actually explored that, though. She is, however, presented as kindly and helpful to her subjects; and while she sometimes falls for Koopa scams, she often manages to trick them back. The Super Mario World cartoon made her somewhat of a Marge Simpson character, maternal and seen as a bit of a nag by the other characters. The Nintendo Comics System presents her as more of a spoiled rich girl, obsessed with her clothes and being a fan of a comic called Baroness Blueblood.

Her father appears in these comics, but he’s pretty incompetent, so she still has to do a lot of the ruling herself. And in the Super Mario Adventures comic, she’s actually pretty bad-ass, able to hold her own against the Koopas much of the time.

I heard that the reason Peach wasn’t a playable character in the New Super Mario Bros. games for Wii and Wii U was that nobody was sure how to animate her, presumably because of the dress. I’m not sure why they couldn’t have just changed her clothes if that was the only problem.

She does, however, appear as a playable character in Super Mario 3D World; and that still puts Nintendo ahead of Ubisoft.