When I wrote about Princess Peach’s father, I noted that it’s pretty common in fiction for kings to have young, strong-willed daughters who are only children, and for the mother to be nowhere in sight. Rebecca pointed out that a lot of these fictional worlds are of a technological level where it’s likely still common for mothers to die in childbirth. I mentioned Princess Zelda as another character who often has a father but no mother. There are several different Princess Zeldas in the series, and sometimes her father is an active participant in the game, sometimes only mentioned, and sometimes not present. Oh, and sometimes he’s a boat.

In the DiC cartoons and Valiant comics, her father is King Harkinian, who’s somewhat similar to King Toadstool. He’s not a total moron like the Mushroom King, but he tends to be forgetful.

And as far as video game cartoons go, King Charles of Videoland in Captain N appears to be competent, and actually has a son as well as a daughter. Still, since he’s been exiled to another dimension and Prince Lyle is living on the remote world of Tetris, it’s Princess Lana who does all the ruling. Princesses just go over better with young audiences than queens do, I suppose. Charles also looks pretty old to have a teenage daughter.

In the earlier post, I mentioned Gwaelin in Dragon Quest and Marle in Chrono Trigger, and Dragon Quest IV has both the Tsar of Zamoksva and the King of Endor as widowers with one daughter each.

We know that Marle’s mother was named Aliza and that she didn’t die in childbirth, but rather of an illness when Marle was four years old. Both King Guardia III and Tsar Stepan are largely characterized by being overprotective, although it’s kind of hard to blame them when you can’t walk from one town to the next without running into a whole bunch of bloodthirsty monsters. Mind you, Stepan really has nothing to worry about, as Tsarevna Alena is one of the strongest fighters in the game. Marle isn’t as tough, but she can still hold her own in a fight, particularly once she masters ice magic. 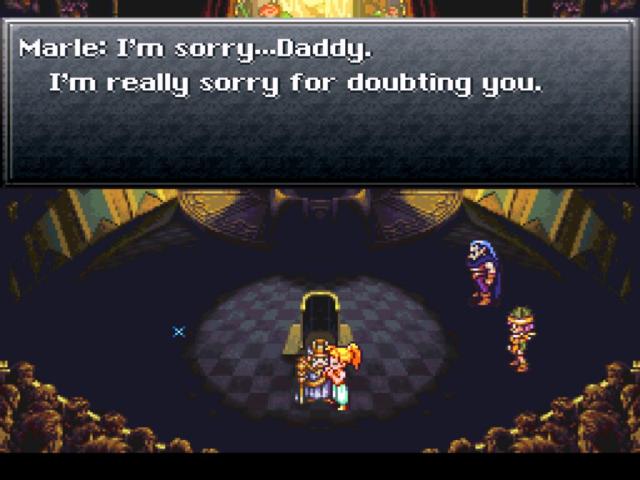 Disney’s Aladdin also fits with this theme, with Princess Jasmine being the daughter of a sultan who’s old, kindly, and rather dim-witted. He’s also under the influence of a nasty counselor, just as King Guardia is.

Good but gullible monarchs under the control of evil counselors is another trope in and of itself, but it definitely helps when the king is absent-minded and trusting. Like much of the movie, this element appears to have been inspired by the 1940 Thief of Bagdad, which also has a childish sultan whose daughter is the hero’s love interest. This earlier sultan was more psychotic than his animated equivalent, however. Continuing with Disney, Maurice from Beauty and the Beast isn’t a king, but he is a kind, elderly, eccentric single father of an independent girl.

King Triton in The Little Mermaid is also a single dad, although he has multiple daughters and isn’t scatterbrained.

I’m sure this trope appears in a lot of other media, but considering my own interests, I feel it’s fitting to move on to Oz. I can’t actually recall L. Frank Baum using it, but Ruth Plumly Thompson did a few times, most notably with Ozma herself. Baum had stated that the former king was Ozma’s father Pastoria, but it was Thompson who introduced him as a character, and who made him absent-minded and overly trusting.

King Sizzeroo of Umbrella Island is another kind-hearted but foolish ruler with an intelligent daughter and no visible wife.

Peer Haps of Perhaps City with his daughter Princess Pretty Good kind of fits as well, although he isn’t presented as being particularly feeble-minded. Aside from mothers dying in childbirth, I think the trope persists for a few reasons. The stereotype is that fathers are protective of their daughters, and this is made even worse by the fact that this daughter is often his only child, and probably reminds him of his late wife. At least, I assume that most kings in media intended at least partially for children each had only one wife who was also the mother of his child, although I know this isn’t always the case with actual kings. The grief over losing this wife might help to explain why so many of these widowers seem rather confused all the time. And old kings would want their daughters to marry someone who can carry on their legacies.

1 Response to The Single Dads’ Club