I’d been thinking of writing something about Ayn Rand, due partially to my seeing this rather odd juxtaposition at Barnes & Noble:

They also mentioned on Last Week Tonight how odd it is that modern conservatives love Rand, despite the fact that she was an atheist, pro-choice, and not a fan of President Reagan. 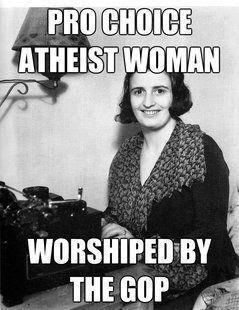 I’ve pointed out before how the modern Republican Party seems to be a bizarre mix of religious fanaticism and utter selfishness, which strike me as pretty much entirely opposed to one another. I haven’t actually read anything by Rand, even though I was supposed to read The Fountainhead in my sophomore year of high school. I’m not proud of that, but I haven’t exactly had the urge to go back and read it either. What I’ve heard of her writing comes across as rather contradictory, like how Atlas Shrugged is supposed to be about what happens when creative business leaders leave society to crumble, yet two of the people who hang out in Businessman’s Utopia are a banker and an oilman. Can you think of LESS creative ways to make money? Well, yes, inheriting it, but that’s another issue entirely. And, as everyone likes to point out, Rand herself was on public assistance. A lot of what I hear about her makes her sound like one of those all-too-common people who aren’t rich but think they will be someday, and think that kissing the asses of the wealthy will aid in this goal. Of course, if the already-rich are operating out of total self-interest, there’s no reason why they’d accept you unless there was something in it for them. Not to mention that the philosophy of Objectivism doesn’t appear to take into account that some people just don’t have heads for business or anything that can make money, and that even those who do don’t always have the resources to get started.

Mind you, I don’t know that I can be that hard on Rand herself, who grew up in the Soviet Union and saw the faults of communism first-hand, so the fact that she’s go a little too far in the other direction is somewhat understandable. It’s the people who worship Rand despite her philosophy not even working in their interest that I have trouble figuring out.

This subject in turn got me thinking about religious attitudes toward greed and altruism. Obviously there are a lot of different religions that teach different things, but it seems like the big ones tend to emphasize selflessness and helping out the less fortunate. That’s certainly in the Bible a lot more often than some of the things fundamentalists regard as central to their faith. That said, there are different opinions even within the same religion as to how much you should help out society, and how much you’re allowed to keep for yourself. It seems that the modern conservative argument is that the rich do give to charity, and I’m willing to believe this. The problem is that they usually only give to specific charities, which is fine in and of itself but leaves a lot of people who need help unaccounted for. I see redistribution of wealth as necessary in order to provide for the poor. One argument against this is that the government can’t be trusted to work in the people’s interest, and I can’t really deny that. What I can say, however, is that the government usually at least does SOMETHING to help the less fortunate, while the private sector does very little. It’s not hard to see why people need government assistance, and can’t just ask for a loan from a bank.

One belief that televangelists like to espouse is the prosperity gospel, which basically says that being rich is proof that God favors you. I’m not sure how believers in this account for rich people who aren’t religious. The thing is, there is some support in the Bible for the idea that wealth and comfort are gifts from God. But, as with much of the book, there are arguments for the other side as well. Jesus was a big supporter of giving what you have to the poor and riches holding you down. It’s the meek and the poor who would be rewarded in the coming Kingdom of God.

Mind you, Jesus also seemed to think the world was going to end soon. As Christianity developed and fell into the hands of politicians, it became generally more defensive of the economic divide. It could be argued that some aspects of religion are inherently greedy, as per the idea of priests and ministers making money by encouraging a system in which they’re a vital part. Back in the days when animal sacrifice was common, a priest would get a free meal by telling someone they were giving an animal to the gods, then eating what was left over. I’m not saying this to bad-mouth the clergy, many of whom take such positions because they genuinely want to help people. I’m just pointing out that it does come across as suspiciously convenient for them. At the same time, if God loves all his children, why DOES he make some of them rich and some poor? Couldn’t an all-powerful being even out the distribution of wealth through miracles? If there’s an all-powerful and all-benevolent force at work in the universe, why do we need to give to the poor? I suppose this gets into the question of suffering, to which many possible answers have been given. I’m not an atheist because I think the world shouldn’t be so bad if the Almighty is good, but it does make me suspect that any god who did exist isn’t doing such a good job. The fact remains, however, that religion often is very much in favor of helping out other people, and I’m totally behind that.

2 Responses to God vs. Greed