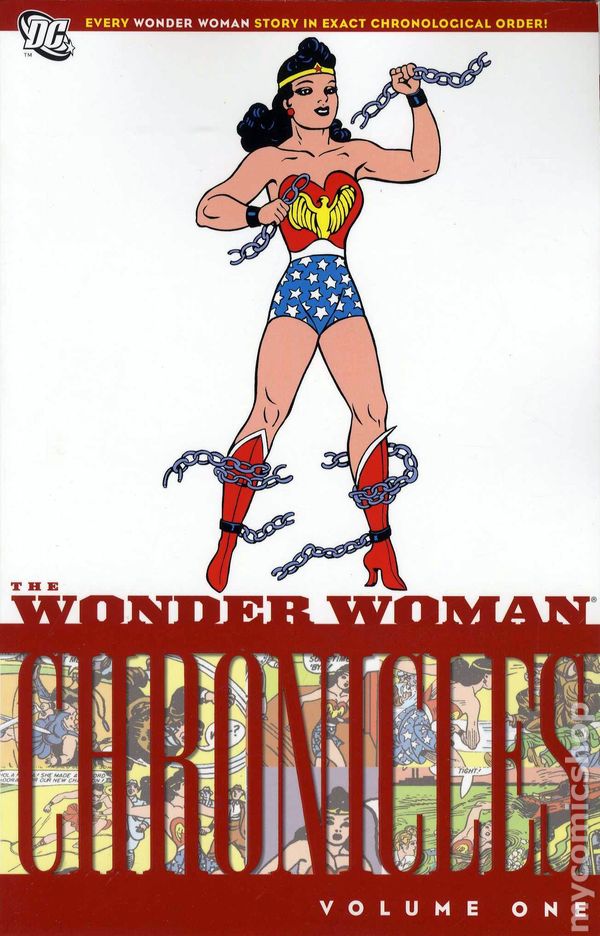 The Wonder Woman Chronicles, Volume One, by William Moulton Marston and Harry G. Peter – Wonder Woman was not technically the first female superhero, but she was the first to become an enduring character in the world of comics, which even now is largely a super sausage fest. I think it’s fair to say that Marston, a psychologist, lawyer, and inventor of the systolic blood pressure test that was instrumental in the polygraph, had feminist beliefs, although some of it doesn’t hold up all that well in modern times. He was obsessed with bondage, and the fact both the heroine and other characters are constantly being tied up fed into his own fantasies. It’s also interesting to note that, in the character’s original origin story, her reason for leaving her home and coming to the United States was that she had a crush on a dude.

When Major Steve Trevor crashes on Paradise Island (it wasn’t called Themiscyra until the eighties), she takes him back to the States and takes a job as an Army nurse and secretary to be near him. She actually switches places with an existing nurse who has the same first name and a quite similar appearance. So the career of a feminist icon and embodiment of truth started with her moving halfway around the world to be with a guy she barely knew and committing fraud. There’s also a weird mix of Diana taking advantage of men’s expectations about women (shades of the Biblical Jael and Judith here) and actually wanting to conform to the stereotypes. As Lois Lane is more interested in Superman than in Clark Kent and Jane Foster in Thor over Donald Blake, Trevor favors Wonder Woman over Diana. Another recurring character is Etta Candy, an overweight college student who’s obsessed with candy. To her credit, she’s actually quite competent when she needs to be, but the whole idea of the fat chick being used as comic relief isn’t all that enlightened. (I just suddenly wondered if Melissa McCarthy is going to play her in the upcoming movie.)

Most of the stories here involve Diana fighting Nazi spies, which isn’t too surprising in a wartime comic. These espionage accounts can become awfully convoluted, like when a Japanese spy pretends to be a Burmese elephant handler in a circus.

Her bullet-defecting bracelets and invisible plane (not yet a jet plane) were around since her very first appearance, while her lasso didn’t show up until a few issues in. Oddly, this was retconned a few issues later to say she had the lasso on her first trip to the States. And I don’t know if her spinning around to change her clothes was original with the 1970s television series or what, but here there are a few panels of her doing that manually.

There’s a fair amount of Greek mythology incorporated into the story, although there are some liberties taken with the source material, and Marston mixes up Greek and Roman names. Hercules‘ theft of Queen Hippolyte’s magic girdle, which was one of his twelve labors, is central to the Amazons’ withdrawal to their own island utopia.

Apparently they’re extremely long-lived while they stay there, and the same Hippolyte is still the ruler. Diana is her daughter, but rather than being born in the normal way, she was made of clay and animated by Aphrodite. The giant kangaroos that the Amazons ride are apparently new with the comic, but they’re pretty cool.

4 Responses to Wednesday with Wonder Woman