School Is Hell, Cooperation Is Divine

Here are a few new book reviews, with a few spoilers.

You Can Date Boys When You’re Forty, by Dave Barry – Now semi-retired but with the same basic sense of humor, Barry discusses such topics as Justin Bieber and Fifty Shades of Grey. There’s also an account of his family trip to Israel that, while jokey in spots, makes genuine cases for both the Israeli and Palestinian viewpoints. I believe I’ve read all of his humorous essay books, but little of his fiction. I’m trying to work on that now. It’s weird how Barry suddenly switched wives in the late 1990s with no mention of details when he’s usually quite open about his personal life, but maybe it was part of his divorce settlement that he couldn’t.

The Blood of Olympus, by Rick Riordan – The last book in the Heroes of Olympus series ends pretty similarly to the final battles in his other mythology-themed series. Opposing sides put aside their differences to fight a common enemy, a villain sacrifices himself to take out a larger threat, and there are casualties but most of the main characters survive. There are also a lot of couples formed, although most of them got together in previous books. Leo Valdez is reunited with Calypso after successfully cheating death, and even the gloomy Nico di Angelo is hinted to have started up a relationship. Definitely an engaging read, and there are satisfactory solutions to the vast majority of loose ends, even with the expanded cast that features in these books. I have to wonder if this is it for Riordan and Greco-Roman mythology, except maybe cameos and short stories. He’s already gotten two series out of it. That said, he seems to have an uncanny knack for coming up with new ideas when you think he’s exhausted just about all of them. There’s a bit of a set-up for his upcoming Norse mythology series, which will star one of Annabeth Chase’s cousins. The Eye of Zoltar, by Jasper Fforde – The third book in the young adult Chronicles of Kazam series escalates matters somewhat with a cliffhanger ending and likely change to the status quo. Jennifer Strange and her companions find themselves searching the Cambrian Empire, which used to be Wales but is now a deadly land of monsters under the rule of a crazy tyrant. While not as complicated as Fforde’s other series, there is plenty of his usual style of humor to be found here, addressing such topics as the mathematics behind jeopardy tourism, the ups and downs of futures speculation, and the best method of harvesting angel feathers. The titular Zoltar is a no-longer-living magician, but I have to wonder where the name originated. I know it’s the name of fortune-telling machines and a villain from Battle of the Planets. Anyway, I’m hoping for a new Nursery Crime book next, and it looks like I might get my wish, although the anticipated 2014 release date is now unlikely. 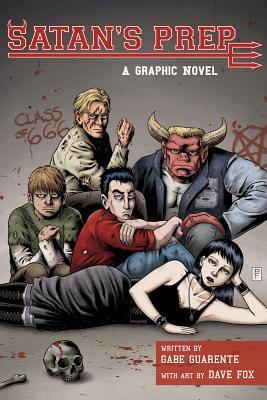 Satan’s Prep, by Gabe Guarente – My wife bought this graphic novel because she knows one of the artists, Dave Fox. There were actually a few different people drawing for the book, and you can see obvious differences between the parts. The protagonist, Trevor, dies from electrocution by a cheap guitar amplifier, and ends up in high school in Hell. It’s not really all that different from regular high school, except the bullying jocks are demons, Cerberus is the principal, sex ed videos feature your parents, and being cooked and eaten alive (okay, not quite ALIVE, but you know what I mean) is a viable punishment. I thought of the recent Simpsons Halloween segment where Bart finds out that he’s much better at school in Hell, but this book came out before that episode aired. I found it clever and the artwork appropriately gross, but I’m not quite sure about the ending. I mean, it was a resolution of sorts, but kind of depressing when you think about it.