SPOILERS for Final Fantasy (the first one) and The 7th Saga.

The idea of a time loop is one that comes up occasionally in fiction, sometimes as simply a repeating part of history, and other times involving time travel that turns out to be necessary to the present. It’s not surprising that this concept would show up in video games, as they’re pretty much based on having to repeat the same events over and over until you get things right. Some games actually have time loops incorporated into their plots, however, one such being the original Final Fantasy. As an early role-playing console game, the plot is mostly straightforward. You travel around the world fighting monsters, kill the four Fiends that are in charge, and then restore peace and order by beating their boss. The weird element is that this final battle actually takes place 2000 years back in time. After defeating the Fiends, you find a way to travel back 2000 years, and you once again encounter the game’s very first boss, the evil knight Garland.

He tells you that, when you defeated him the first time, he was drawn back in time, and he then sent the Fiends into the future.

He then turns into a monster called Chaos, and killing him is the only way to end the time loop.

In-game text indicates that Tiamat, Fiend of the Wind, appeared 400 years previously to destroy the highly advanced Lufenian civilization. The Kraken ravaged Onrac 200 years later, and Lich had just recently started rotting the earth. The Fiend of Fire, called Kary in the original translation and Marilith in later ones, apparently wasn’t supposed to show up until 200 years later. She woke up after the Light Warriors defeated Lich. She was obviously present at the time of the game, however, and didn’t have to be sent forwards in time. Couldn’t they all have just hibernated until they were needed, or for that matter just destroyed the world 2000 years earlier? And if Chaos was formed in the past, wouldn’t he still be around in the present? Or did he need to transfer his consciousness into Garland and perpetuate the time loop in order to keep existing?

Even god-like beings have their limits, I suppose. According to the confusing ending story combined with some dialogue from elsewhere in the game, Garland was a loyal knight of the Kingdom of Cornelia until “a twist of fate” resulted in his becoming corrupt and seething with hatred. I haven’t played the Final Fantasy Dissidia games, but I understand they add more to the Garland/Chaos back story. Chaos was a biological weapon created by Cid of the Lufaine (originally, FF1 was the only game in the series that didn’t have a character named Cid) who went rogue and created the alternate world where these games take place. Cid also charged Garland with overseeing Chaos’ battle with Cosmos, another powerful being he created. It’s very puzzling, but you wouldn’t think someone named Chaos would come up with a straightforward plot, would you?

The comic 8-Bit Theater, which loosely retells the story of FF1, doesn’t use the Garland/Chaos time loop. There is, however, a time loop of sorts with Sarda. He’s an actual character in the game, but a minor one, a sage who gives a magic rod to the party so they can lift a stone plate in the Earth Cave.

In the comic, his role is greatly expanded into that of the near-omnipotent Wizard Who Did It (a reference to a Simpsons joke about how all technical errors in TV shows are caused by wizards), who has a penchant for rearranging reality just to mess with people. 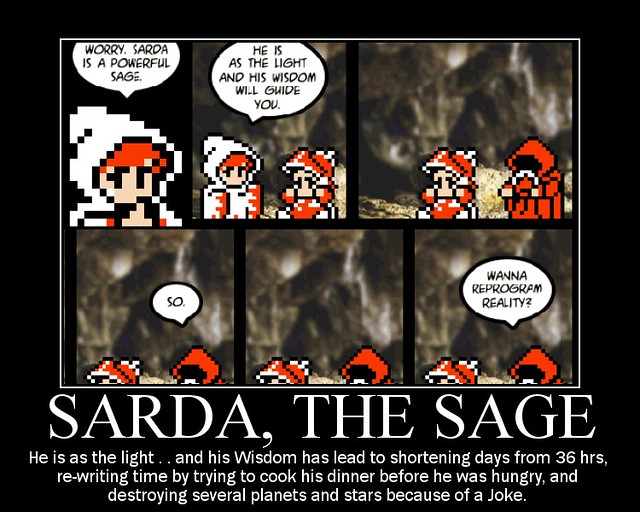 It eventually turns out that his child self exists in the same time period, and is constantly tormented by the Light Warriors, especially Black Mage. He studies to become a wizard, and then sends himself back to the beginning of the universe so that he can remake it. Unfortunately for him, he accidentally sends White Mage back to the dawn of time as well, and she becomes the new creator instead of him. He’s then stranded in space for billions of years, finally sending the Light Warriors out to retrieve the Orbs so he can siphon their power for himself. He’s the one who becomes Chaos in this retelling of the story, and while Chaos exists in the present time instead of the past, time travel was still a necessary part of his origin. Garland is in the comic, quite prominently in fact, but he’s presented as a totally incompetent villain. Another game that uses the time loop idea, and in a quite similar way, is the notoriously difficult Super Nintendo adventure The 7th Saga. Part of the back story of the game is that, 5000 years previously, the hero Saro (apparently no relation to Psaro from Dragon Quest IV, who’s called Saro in the original translation) defeated the evil Gorsia with the help of seven magic runes.

In the present, King Lemele sends his seven apprentices to search for the runes, only to reveal once they’ve found them that he’s actually Gorsia in disguise, having journeyed into the future for some reason. He sends you back in time 5000 years, and you can defeat him, but he takes you down with him.

Saro then resurrects you in the form of…King Lemele. So is anything actually accomplished here? I’ve seen theories to the effect that the defeat of Gorsia means he won’t be able to travel through time again. There’s also an indication that Saro will warn Lemele about Gorsia’s treachery.

If so, the villain must have made a mistake in sending you to a time in which you could potentially defeat him. Or was that the only time he could access? Regardless, it’s kind of disappointing that the ending is the same for every character even though their motivations for gathering the runes are totally different.