So, is the plural “dwarfs” or “dwarves”? I believe the former is considered preferable, but J.R.R. Tolkien and I like the latter.

Regardless, modern media tends to portray them fairly consistently, as diminutive but sturdy people with thick beards, who either work in mines or as smiths.

I would think the beard might be a liability when working around a lot of dirt or dust, but they seem to manage it all right. While they’re loosely identified as magical beings, they don’t so much practice magic as simply have it in their compositions. They’re highly skilled, and in Norse mythology they made several items for the gods, some of which were magical in nature. There are magic-working dwarves in some stories, though, like the one in “Snow White and Rose Red” who turned a prince into a bear. 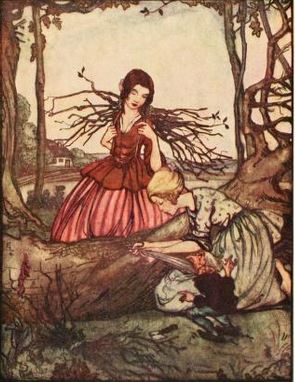 This dwarf is also a real jerk, while they’re generally portrayed rather more sympathetically. One of the Seven Dwarfs in the Disney version of the other fairy tale featuring Snow White is called Grumpy, but his grouchiness is played for laughs, and he’s ultimately kind-hearted. The Chronicles of Narnia divide dwarfs into red and black, based on the color of their hair. The black ones tend to be angrier and more vindictive, which has some unfortunate implications, even if they weren’t intentional. The main black dwarf in the series is Nikabrik in Prince Caspian, who distrusts Caspian and wants to revive the White Witch.

In the movies, the Witch’s sledge driver is named Ginarrbrik, and is Nikabrik’s ancestor. Let’s just be glad Caspian never ran into Nikabrik’s cousin Throwabrik. In The Last Battle, most of the dwarfs turn against Narnia, and refuse to acknowledge Aslan and his country, thereby being shut out of Heaven by their own disbelief. This obviously aligns with C.S. Lewis’ theology, but it leaves open the question as to why he chose the dwarfs as his negative example.

Wagner’s dwarf characters in the Ring Cycle were basically written as negative Jewish stereotypes, being greedy and underhanded. The Jewish dwarf was an idea that stuck later on, but was often used in a more positive way. Tolkien admitted that there was a certain Jewishness to his Dwarves, and while they still suffered from avarice, they were also people who had lost their homeland. Perhaps even more importantly in fiction by a linguist, the Khuzdul language was intended to be Semitic.

Terry Pratchett’s Discworld dwarfs also play somewhat on the connection, with considerable in-fighting between the orthodox and the more liberal among them.

Now it seems to have become common for dwarves to be portrayed more as Scottish than Jewish, as discussed in this Reddit thread. Apparently the first known dwarf to speak in a Scottish brogue was in a Poul Anderson story from 1953. it’s also not uncommon for Vikings in modern media to have Scottish accents, which isn’t all that weird as there were a lot of Norse settlers in Scotland. I guess people just think of Scots when they think of surly guys with beards.

Dwarves appear rather often in the Final Fantasy series, starting with the very first one. Here, they live in a cave to the north of Elfheim, and an engineer named Nerrick is working on a canal to connect the Aldean Sea to the main ocean. He needs explosives in order to accomplish this, and in the original game he disappears and never comes back after you give them to him. I hope he didn’t blow himself up! I don’t know if he returns in later versions of the game.

There’s also a dwarf blacksmith who can make the sword Excalibur out of adamant. FF4 has a significant dwarf population in the Underworld, ruled over by King Giott.

They’re apparently rather technologically advanced, since, unlike the surface nations, they have tanks.

They also have a blacksmith who works with adamant, named Kokkol, although here he uses it to turn the Mythgraven Blade into Excalibur.

Legends of Localization suggests that Cid Pollendina might be part dwarf, which would explain his beard and uncanny mechanical skill.

I believe FF9 is the first game in the series to give dwarves a Scottish accent, but it was later introduced into remakes of the earlier ones. FF dwarves are also known for their yell of “lali-ho” or “rally-ho” (there’s apparently no consensus on the transliteration), probably inspired by Disney’s “hi-ho.”

Indeed, the dwarves in the town of Tomra in FF4 actually say “hi-ho” instead. Chrono Cross also has dwarves, and they drive a weapon called the Hi-Ho Tank. I remember it being rather difficult to defeat, although I did eventually.