The level of technology throughout the games in the Final Fantasy series vastly differs, from sword-and-sorcery worlds in the earlier ones to more modern levels in later installments. There are a few items all of them have in common, like airships, but even those differ from one game to another. Earlier airships are basically sailing ships with propellers, while other games make them more like zeppelins or airplanes.

Robots are also pretty common, even in the earlier games. A recurring theme in the series is to have some of the more advanced and/or unusual technology come from a lost civilization. This shows up from time to time in fiction and pseudo-history, the most famous example probably being the nineteenth century interpretation of Plato’s Atlantis. While Plato merely identified the lost land as a fearsome military power that eventually sank into the ocean, later interpretations claimed that it was highly technologically advanced, and that Atlantean refugees founded other major civilizations. There’s a general theme of Atlantis and other such places being destroyed due to the hubris of their inhabitants, who are overly ambitious and often mess around with dangerous forces. From time to time, I’ll see some weird rumor about the ancient Egyptians having lightbulbs and flying machines, or Sodom and Gomorrah having been leveled with nuclear weapons. While these strike me as obvious exaggerations, it is true that there are some technologies that have become lost for various reasons, including lack of practical applications, conquerors declaring the knowledge of conquered people to be heretical, or simple carelessness. The Greeks discovered steam power centuries before anyone determined how it could be harnessed for transportation and other labor-saving devices, and we still don’t know exactly what went into Greek fire. Flying ships and functional androids are a different story, but people certainly came up with the IDEA for such things in the distant past.

In FF1, the advanced civilization was that of Lufenia, which seems to have fallen not due to its own sins, but rather the involvement of the Wind Fiend Tiamat 400 years prior to the start of the game.

Their base of operations was a floating castle in space, containing robots and what look to be computer terminals. The most famous robot is the WarMech, a machine with a nuclear attack and the ability to heal itself.

This weapon only shows up on the bride leading to Tiamat’s room, and the chances of encountering it are only one in sixty-four. I ran into it a few times, but never defeated it.

Another much friendlier robot dwells in a cavern behind a waterfall, and gives you the warp cube necessary to activate the teleporter from the Mirage Tower to the Sky Castle. The airships, and probably the castle itself, are kept aloft with magical levitation stones. According to Final Fantasy Dissidia, the Lufaine were also able to create artificial life forms, of which Chaos is one. Lufenia still exists, but as a remote village with none of its previous glory.

FF3 mentions a lost civilization that manufactured airships, but few details are given. FF4 adds in the concept of contact with aliens, with the Lunarian Kluya visiting the Earth and showing the people of Baron how to make airships and the Devil’s Road to Mysidia.

There appears to be a fair amount of magic in Lunarian technology, as Kluya’s ship is raised from the sea by the prayers of the Mysidians, and contains a Fat Chocobo as its baggage compartment.

The Lunarians also built the Giant of Babil, an enormous robot that Golbez activates with the power of the elemental crystals.

Other advanced technology includes Dr. Lugae’s robots , giant cannons, and genetic experiments, as well as the hovercraft from Damcyan, but I don’t think we’re ever told whether these are based on Lunarian tech.

Golbez’s base of operations is the Tower of Zot, which does not appear on the world map and is reached when Cecil follows Kain straight up into the air on the airship Enterprise. This could be another floating building, but we never find out for sure. FF5 also involves a lost civilization that created a floating town and airships, but the town is in ruins and crashes to the ground after the Earth Crystal loses its power.

Apparently this kind of thing was a habit in the FF worlds.

The setting of FF6 is more of a steampunk one, in which steam power and gunpowder are in common use. There are only two known airships in this world, but they aren’t magical in nature. In fact, magic largely disappeared from the world after the War of the Magi 1000 years previously, which resulted in the Espers relocating to their own hidden land. The Empire has recently rediscovered this place, however, and drained magical power from the Espers to create Magitek machines and augment soldiers with magic. Outside the FF series, the Kingdom of Zeal from Chrono Trigger is a textbook example of the trope, a floating land that was in the height of its power 12,000 years before the founding of Guardia.

It’s a haven for both magical research, and contains such technologies as transporters, magic pendants, and an airship. When Queen Zeal makes a deal with the Devil, or more accurately the alien parasite Lavos, it leads to the entire nation falling into the sea, and magic becoming largely forgotten.

I’m sure this idea appears in many more games, but I’m going to close out this post by talking about The 7th Saga, in which one of the playable characters is Lux Tizer, a robot known as a Tetujin. His goal is to find out who created the Tetujin and why. Would you be surprised if I told you it was an advanced civilization from the distant past that messed around with dark forces beyond its control? Yeah, I didn’t think so. In this case, the city of Melenam thrived 5000 years in the past, and was known for creating the Tetujin and a supercomputer that ran on power from the Dark World. (Dude, you’re getting a Hell!) A scientist named Dr. Fail was in charge of building a super-Tetujin to defeat Gorsia, but…well, let’s say the doctor lived up–or rather down–to his name. The robot rebelled and the city was destroyed. While you see this part of the story after traveling back in time, you visit the ruins in the present time, and it contains some worn-out Tetujin. The robots must have been well built for the most part, though, if Lux is still functional 5000 years later. 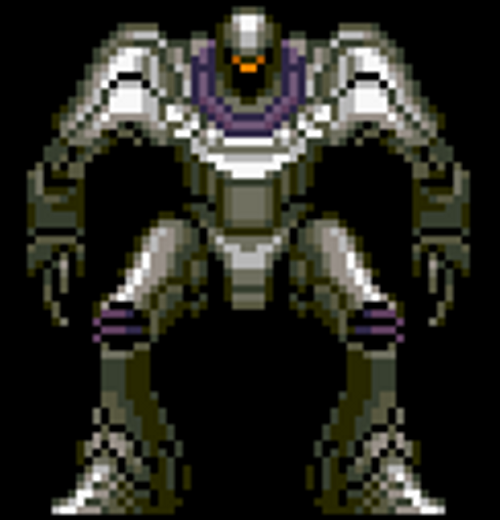 2 Responses to Lost and Found Tech