A Man Walks Into Barsoom 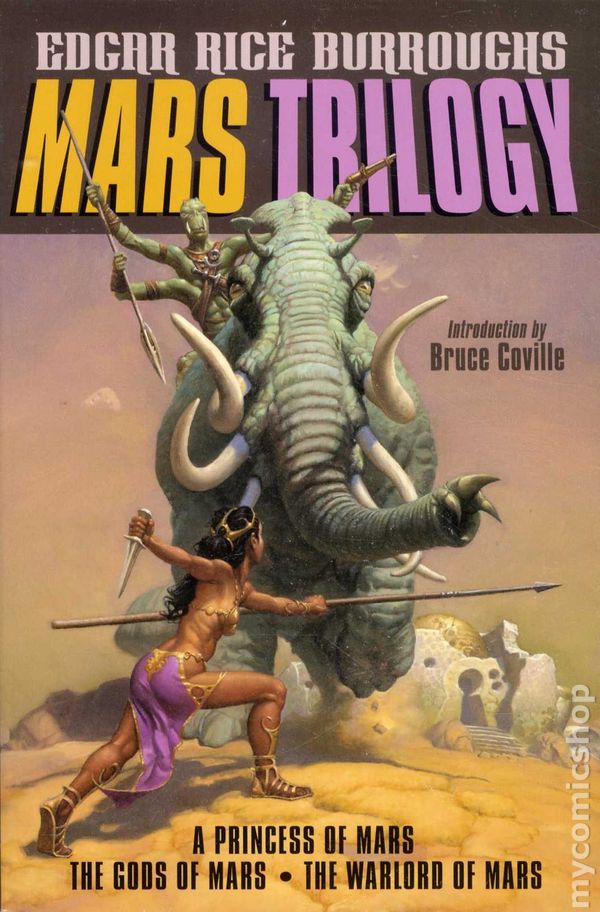 The Mars Trilogy, by Edgar Rice Burroughs – While Burroughs is best known for Tarzan, he also wrote a series of books about the red planet, which combine light science fiction with swashbuckling adventure. I don’t know that they’re that popular anymore, but they were definitely highly influential. I wonder if Burroughs was the first to introduce Martians with green skin. Others, however, were red and yellow, black and white. Even though John Carter was a Confederate officer in the Civil War, he seems to recognize the different sorts of Martians as individuals. Mars, or Barsoom as its inhabitants call it, is presented as a dying but inhabited world, where water has to be brought up from far underground and breathable air is produced by factories. The different tribes are constantly at war with each other, and compassion and humor are very rare, but at the same time there’s a definite nobility to most of the people. This volume contains the first three books in the series. In A Princess of Mars, Carter is transported to Mars through what seems to be astral projection, although he obviously has his normal body when he’s there, as part of what makes him a great warrior is that being used to stronger gravity makes him able to leap great distances. Burroughs claims to have taken the basic view of Mars and Carter’s means of transportation there from the works of astronomer and science fiction writer Camille Flammarion. Carter learns about the Martian life forms and their warlike culture, and wins the hand of Dejah Thoris, beautiful red-skinned daughter of the chief of Helium. It ends with Carter being sent back to Earth, where he pines for Barsoom. He returns in The Gods of Mars, which is centered around exposing the Martian religion as a lie. The people believe that travel down the River Iss takes them to the afterlife, but instead they become slaves in underground caverns. We also find out that Carter has a son, because apparently Earth people can copulate with egg-laying Martians. The Warlord of Mars picks up where the second book leaves off, with Carter going on trial for heresy, and rescuing his wife from the inhabitants of the polar region. I have not yet seen the recent movie, which I know was a critical flop, but maybe I should now that I’ve read some of the books.

I suspect this series of having some influence on Star Wars, considering the use of some similar words. A Barsoomian chief is called a jed, a lieutenant is a padwar, there are animals called banths, and apparently later books have insects called sith. There’s also the common issue of why there would be so much swordplay in a society with incredibly advanced weaponry. The Barsoomians have rifles that can fire up to 300 feet, but it’s not considered proper to fight someone with a weapon more powerful than the one they’ve used to challenge you. Obi-Wan Kenobi considers a lightsaber to be more civilized and “not as clumsy or random” as a blaster, even though it obviously doesn’t have the range. Then again, it’s apparently pretty easy to dodge energy weapons in that galaxy. If I remember the Star Wars NES game correctly, the lightsaber did more damage than a blaster. Of course, the real reason for lightsabers was that they could be conveniently marketed.

5 Responses to A Man Walks Into Barsoom