Set Your Watch for Sim Time

I’ve been playing a bit of Sims 3 as of late, experimenting with the University Life expansion pack. Yeah, I know Sims 4 is out now, but it doesn’t look to be much of an improvement, and is apparently a throwback in some respects. Maybe someone who’s actually played it can tell me if that’s true. Anyway, any incarnation of that game is time-consuming, and seems to distort time somewhat. Mind you, time WITHIN the game is even weirder. In the original game, Sims don’t age at all, except for babies who grow to children within a few in-game days. They do age in Sims 2 and 3, but each life stage is only a matter of days. Even in Sims 3, when you can give your Sims an Epic lifespan, it still only amounts to under 1000 days. Of course, this is pretty much necessary to keep you from spending even MORE time playing just to see someone grow older.

And while each day operates normally in some respects, as with the need to sleep and eat, other things are totally sped up. You can build skills with only a few hours of working out or studying, and promotions often come in a matter of days. By the way, for anyone who complains about supernatural aspects in the games, I’d say vampires and unicorns are much more realistic than anyone being automatically hired for any job and being able to quickly work their way up the ladder. This certainly isn’t the only video game series where such things happen. In Dragon Quest III, for instance, there’s a town that gradually develops as you play through the game. Well, that’s theoretically how it works, anyway. When I’ve played, after I beat the Orochi, it seems to go through all of its stages in a few in-game days. Talk about things just springing up overnight!

Another peculiar thing about Sim time is how Sims 2 is set up as a sequel to the original game, and Sims 3 as a prequel (hey, sort of like the original three Dragon Quests), but a lot about them doesn’t really fit with this. I believe the official word is that Sims 2 takes place about twenty-five years after the first, and Sims 3 about twenty-five years before. I’m not sure how they can speak of years when lifespans are in days. I believe someone on TV Tropes suggested that the games could take place on a planet that rotates on its axis more slowly than it orbits the sun, like Venus. Putting this aside for a minute, I’ve frequently seen it noted that Michael Bachelor is presented as being just out of college in Sims 1, but he’s a teenager in Sims 3. While he could have been a non-traditional student, the description seems to present him as being pretty young. He’s also revealed to be Bella Goth’s older brother, but at the beginning of Sims 1 she’s already married with a kid.

Similarly, Kaylynn Langerak, one of the maids in Sims 2, is an adult (not an elder) in that game, but a child in Sims 3. 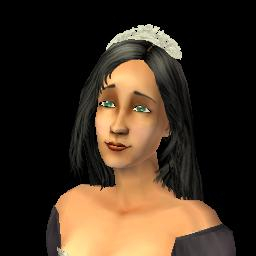 Indeed, the later game makes her a few days older than Mortimer Goth, who is an old man in Sims 2. But then, age can be altered somewhat by Elixir of Life.

For that matter, the Tragic Clown is dead in Sims 3, but that one kind of make sense, as he’s pretty phantasmal in Sims 1.

Also, the Sims 3 characters might well get old and die without ever undergoing the life events that we know of from the earlier games. I believe it’s common in Sims 3 for Mortimer and Bella to end up getting married, but it’s not set in stone. I guess it starts out as a prequel, but then becomes an alternate timeline.

There’s also the issue of how the timeline seems to go back and forth in some respects related to technology and social issues. Cell phones go from being something everyone has to totally unknown to more of a luxury product. We go from gay marriage being legal to its not being an option but polygamy being acceptable, then finally to same-sex civil unions being permissible but not called marriage. There’s also a period when no one drives a car, even though the fact that their neighborhood is so far from most places they’d want to visit that you’d think it would be even more necessary. In some ways, the attempts to make things more realistic remove some of the challenge. If everybody has a cell phone, they no longer have to race across the house to answer a ringing phone. On the other hand, you can no longer win prizes just for answering, so it doesn’t affect the gameplay that much. If you can visit a gym or go jogging, it is no longer as vital to purchase an exercise machine. On the other hand, you do have to buy groceries in Sims 2 and 3, as opposed to food just automatically appearing in your refrigerator.