The Bard Is the Word

While I’ve addressed Norse mythology quite a bit, I haven’t yet looked into the great epic of specifically Finnish mythology, the Kalevala. Elias Lönnrot, a nineteenth-century physician and linguist, compiled ancient myths into a single long poem detailing everything from the creation of the world to the arrival of Christianity in Finland. The central character is Väinämöinen, an old wizard, minstrel, and folk hero. While certainly not the first mythical character to produce magic by means of music, he might be the progenitor of the magical bard. His music, like that of Orpheus, can charm all people, animals, and objects.

He is also capable of shifting form, and many other useful sorts of magic as well. J.R.R. Tolkien has admitted that Gandalf was partially inspired by this old bearded wizard, although there’s some of him in Tom Bombadil as well.

Like Gandalf, he has a powerful eagle for a friend. While there is some evidence that Väinämöinen was originally a god who played a role in the Finnish creation story, the Kalevala has him come along later, born after spending thirty years in the womb. That sounds uncomfortable for his mother, but I guess Kronos had five fully-grown gods inside of himself at one point. During the course of his adventures, he invents a harp called a kantele from the head of a giant pike, retrieves fire from the belly of another fish, and learns spells from a giant by tormenting the ogre from inside his stomach. There’s also the tale of his singing battle with a young upstart musician named Joukahainen, whom the old wizard thoroughly trounces, almost sinking him into a swamp. Väinämöinen agrees to spare Joukahainen’s wife when he promises the old man his sister’s hand in marriage, but she drowns herself rather than marry him. Indeed, as much of a bad-ass as he was, Väinämöinen didn’t have much luck with the ladies. He later tried to woo the daughter of Louhi, the hag who ruled the northern country of Pohjola, sometimes associated with Lapland. He offers to present a Sampo as a wedding gift, leading people throughout the ages to wonder just what a Sampo is. It functions as a sort of MacGuffin, but such might not have been the original intent; it’s just a word with a meaning lost to time. The Kalevala presents it as sort of a machine that generates unlimited amounts of food and money. It, or at least its cover, is formed in part from the tips of feathers from swans’ wings, the milk of a barren cow, barley, and summer wool. Louhi’s daughter passes over Väinämöinen in favor of his friend Ilmarinen, the one who actually makes the Sampo, which seems fair enough. Still, what is it about Väinämöinen that repulses women? Maybe he has halitosis. I suppose he might have started the trend of wizards being celibate, although in his case it certainly wasn’t by choice.

After Ilmarinen’s wife dies, he and Väinämöinen team up with another hero, the charming but arrogant Lemminkäinen, to retrieve the Sampo from Louhi. Her own magic powers provide quite the challenge for them, and eventually the device is broken into pieces. In revenge, Louhi steals the Sun and Moon, and the heroes have to nearly conquer Pohjola in order to get the witch to give them back. 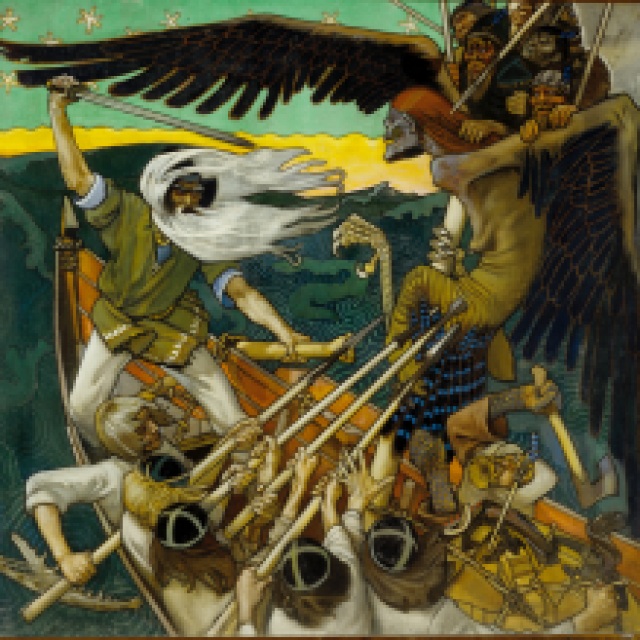 The Kalevala ends with a baby boy being born to a virgin who ate a cranberry, which I guess makes him a cranberry Finn. Väinämöinen orders the baby put to death, but when the child points out the wizard’s hypocritical behavior, the magic minstrel realizes his time has come and sails away in a boat. The correspondence between this baby and Jesus is totally intentional, and Väinämöinen’s departure represents the departure of the old pagan ways in favor of Christianity. Much like King Arthur, however, the wizard does vow to return when he’s needed.

3 Responses to The Bard Is the Word