Beth sent me a link to a video of Jon Stewart interviewing Mike Huckabee. It’s short, but that didn’t stop it from really bugging me. The thing about Huckabee is that he comes across as rather friendly and affable, but his beliefs can be pretty sinister. I’ve never really gotten how anyone can claim to be moral and wholesome while marginalizing entire groups of people. How many people do you hear claiming that the moral thing to do is oppose gay marriage, because a few passages in the Bible says that homosexuality is an abomination to God? You’re denying the rights you enjoy to a significant part of the population just because they prefer to have sex with people of the same gender? Can you really consider that moral or wholesome? If God is really against it, then leave him to judge, rather than trying to do his job. And yes, I know the Bible says the community should stone homosexuals to death, but if you followed those rules there probably wouldn’t be a human still alive.

I also don’t see how it’s moral to claim that women only go on birth control because they can’t control their libidos, or that poor people on government assistance are lazy and greedy. You can believe these things if you want, but don’t claim that it makes you more moral than anyone else. If morals aren’t based on how you treat your fellows (which it probably says in a lot more parts of the Bible than the thing about no butt sex), then what good are they?

Huckabee also has a particular beef with Beyoncé, which I don’t really understand either. I’ve never really had strong feelings toward Beyoncé, but I certainly don’t saw her as some sort of bad role model. Conservatives seem to hate her for some reason. I’m sure the fact that she’s black and successful doesn’t help, but that can’t be all of it, as she’s hardly the only popular black artist around. Besides, since she has a job and didn’t have a kid until after she was married, shouldn’t that make her One of the Good Ones by Republican logic? At least one of the commenters on the Huffington Post article mentioned that President Obama’s daughters are fans of Beyoncé, so that could have something to do with it. According to Huckabee and his ilk, Ms. Knowles-Carter is bad for little girls because she’s “vulgar” and dresses too sexily.

Of course, she’s pretty mild as far as that goes, but that doesn’t stop them from complaining. Huckabee’s love for Ted Nugent is different because “Cat Scratch Fever” is an “adult” song, even though it was apparently mostly popular with teenagers when it came out. Can you really say either one is making music for kids? They’re not Raffi. I heard that Huckabee recently said Jay-Z should have told his wife not to dress so provocatively. Isn’t telling your wife things like that often a sign of an abusive personality? So Huckabee apparently thinks Jay-Z isn’t abusive enough to his spouse. And this guy presents himself as holier-than-thou. Besides, might not the fact that Huckabee thinks Beyoncé is “too sexy” say more about his libido than anything about her?

Maybe not, but I’m just throwing it out there.

I did feel that Huckabee’s talk of “Bubblevilles” and “Bubbavilles,” while quite stupid on its face (and as far as I know he just stole and reversed Bill Maher’s “bubble” term), was sort of fumbling toward a point he never really made. To be fair, I haven’t read his book. But I think the thing people often ignore is that, while rural areas are usually associated with intolerance, there are plenty of racists, homophobes, xenophobes, and the like in supposedly liberal cities as well. To paint an entire area with a single brush is never fair. That’s one reason it always bugs me when Republicans talk about “Hollywood” as if it’s some monolithic entity instead of a bunch of different people with different views.

In case you forget, Republican demigod Ronald Reagan got his start in Hollywood. Yes, Hollywood is mostly liberal politically, but doesn’t all the fuss over only white people being nominated for the Oscars prove that they can be quite conservative in some ways? As for Harvard, I’m sure it’s a good school that produces and employs many experts in various fields. On the other hand, like all Ivy League schools, it’s also an elite institution for rich people.

Regardless of the politics of the faculty and students, its policies are hardly all that liberal. The fact that so many people attack Ivy League institutions for anti-intellectual reasons more or less pushes aside what I see as more serious issues surrounding them. Besides, I’ve never quite understood why the Republican thing seems to be to knock the Ivy League schools, but also attend them and act like that should engender respect. Which is it?

Finally, even if Huckabee didn’t intend the term “Uncle Sugar” to be racist, it certainly SOUNDS like it is. Either that or he’s some kind of anthropomorphic personification of sweetener. I understand Huckabee is diabetic, so he might have more luck with Aunt Aspartame. 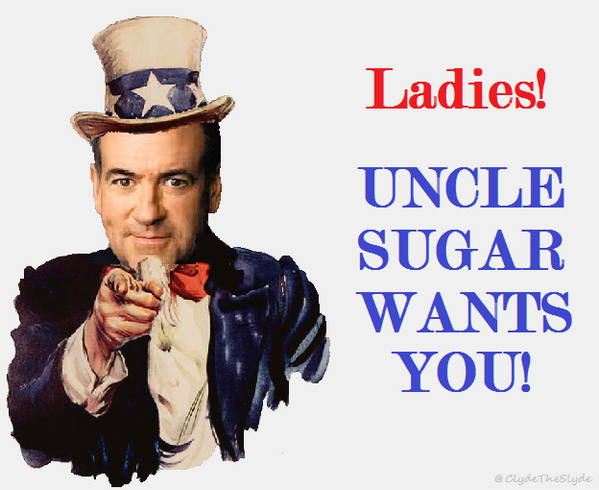 2 Responses to My Huckabee Friend