Mickey Mouse Outwits the Phantom Blot and Lost in Lands of Long Ago, by Floyd Gottfredson – These are the fifth and sixth volumes of Fantagraphics’ reprints of the classic Mickey strips. I still haven’t read the third and fourth, but I don’t think it matters that much. There’s some slight level of continuity between stories, but not a whole lot; the adventures are largely stand-alone. I’ve already looked at the story that introduces the Phantom Blot, and other tales here include the Mouse uncovering a ring of thieves using plumbing as a front, finding a genie and visiting his homeland, accompanying a paleontologist to an island where dinosaurs still live, and thwarting Pete’s latest criminal schemes. It had become standard to show Pete with two regular legs in cartoons of this time, as his peg leg was deemed to look uncomfortable. Gottfredson explained this by having Pete explain that he has a new, more lifelike prosthetic.

The essays accompanying these reprints expound a bit on the philosophy Gottfredson expresses in the strips. The genie tale, for instance, basically implies that simply giving poor people what they need to survive would ultimately backfire. Mickey is also hit by the Depression, which both ties in the strip with what was happening in the real world and provides a reason for the already-rich Mouse to take on new jobs. The Robinson Crusoe tale includes some offensive stereotypes, but even more notable is that it’s presented as a movie Mickey is making, yet another story has Friday’s brother coming to live with Mickey and learn about civilization. I guess the actor who played Friday could have had a brother living in Africa, but it’s still strange. Also, while cartoon characters being portrayed as actors in their own pictures is an old idea, I don’t know that Gottfredson had used it in previous strips; his Mickey isn’t usually portrayed as an employee of Disney within comic continuity.

Donald Duck: Trail of the Unicorn, by Carl Barks – The sixth volume of these reprints of Barks’s strips, which are not being published in chronological order, is a little lacking compared to some of the previous collections but still quite interesting. One impressive thing about Barks was his ability to take a plot off on weird tangents while not forgetting the main premise. A Christmas story about Huey, Dewey, and Louie’s letter to Santa Claus involves Donald and Scrooge fighting with steam shovels in the middle of Duckburg.

In another, Donald gets a job as a traveling salesman, only to be sent to sell steam calliopes in remote British Columbia. The titular unicorn isn’t one of the frilly creatures from the covers of Trapper Keepers, but a ferocious beast that Scrooge sends Donald to retrieve from the Himalayas for his zoo. Scrooge is really only a presence in two of these stories, but Donald’s irritatingly lucky cousin Gladstone Gander features in several. I find it tempting to compare Gladstone to Wimpy from Popeye, as they’re both incredibly lazy characters who avoid work yet always get by. Wimpy often uses his wits to mooch from people, however, while Gladstone would probably consider that too much work. 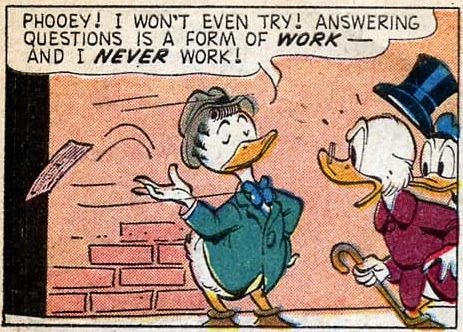