Of all the strange and oddly named characters in nursery rhymes, one of the most famous has to be Humpty Dumpty, perhaps the first egg to receive a name. Versions of the poem date back to at least 1797, and it’s commonly thought that it was originally a riddle. It’s often seemed to me that a lot of old rhyming riddles could have multiple answers. Certainly an egg isn’t the only thing that can’t be put back together after breaking. Also, why would the king’s response to a broken egg include sending all of his horses? What did he expect them do?

Actually, the earliest known version doesn’t mention the king or the horses, but simply “four-score men and four-score more.” Another take, known from James Orchard Halliwell-Phillipps’ 1842 collection of English nursery rhymes and also featured in Beatrix Potter’s Tale of Squirrel Nutkin makes it “forty doctors and forty wrights,” which really makes more sense as people who might be called in for a reassembly job. “Humpty Dumpty” was eighteenth-century English slang for someone short and clumsy, and before that it apparently meant brandy boiled in ale. I don’t know where the image of Humpty as an egg with human features originated. The Wikipedia article mentions actor George L. Fox playing the character as a clown in nineteenth-century pantomime. 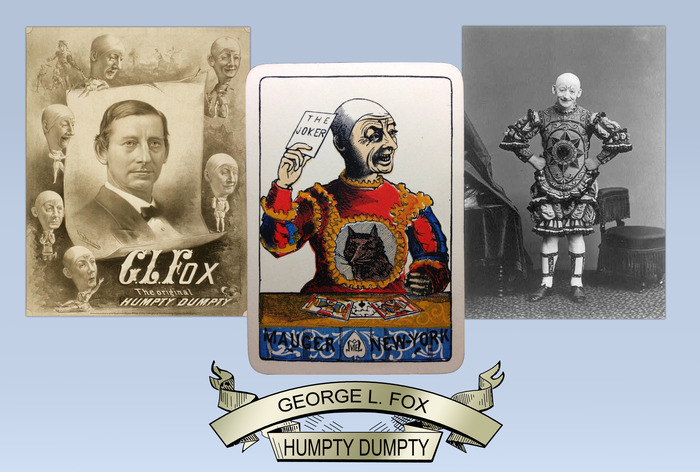 As with other nursery rhymes, there are some rather elaborate alternate interpretations, including that Humpty was King Richard III or a siege cannon used by the Royalists against Colchester in the English Civil War.

There isn’t much evidence for either of these theories, and even if there is a historical basis for the rhyme, there’s hardly enough detail in it for anyone to figure out exactly what it would have been.

Humpty’s most famous literary appearance is probably in Lewis Carroll’s Through the Looking-Glass, in which the egg is a proud character (as in “pride goeth before a fall”) who plays around with language, famously declaring that the words he uses mean exactly what he intends them to, whether or not he’s using standard definitions.

He’s skilled at interpreting seemingly nonsensical verse (perhaps because the words can mean whatever he wants them to), and recites a poem that appears to be missing a lot of key information. He also needs to see one subtracted from 365 on paper, likely a joke on how language experts are often bad at math. (Carroll, as a mathematician who was also quite skilled with language, probably thought he had a right to gloat on this point.) Due to the egg man’s weird shape, Alice is unable to tell whether an accessory he wears is a belt or a cravat. Alice knows the last line of the rhyme as “Couldn’t put Humpty back in his place again,” which she admits is too long for the poetry.

While Humpty’s fall is part of the story, there’s no way such a fun character would be neglected in later works based on Carroll, so apparently there was some way to put him back together again. In The Oz-Wonderland Chronicles, the White Knight accomplishes this with one of his unorthodox inventions. Both this series and The Oz-Wonderland War make Humpty instrumental in defeating the Nome King, who of course is weak against eggs.

L. Frank Baum had a different take on Humpty in Mother Goose in Prose.

After being laid and named by a hen, he is pushed out of the nest by the other eggs. He then takes up with a female egg named Coutchie-Coulou, who was laid by a different hen. The two of them visit a castle, where Coutchie-Coulou is trampled by a horse. Humpty befriends a princess, but meets his own end when falling from a wall while trying to look at the king and his entourage. The princess then immortalizes him in a riddle. K. Kline’s Kaliko in Oz sort of follows up on this by introducing another egg named Eggy McShell, who hails from the town of Dumptyville founded by the princess, and keeps trying to fall off walls in order to become famous like Humpty. Eventually, the Patchwork Girl writes a poem for Eggy.

He also becomes unlikely friends with Kaliko, who learns that the tears of an egg-person are an effective antidote to eggs’ deadly effect on Nomes.

And leaving Oz behind for other fictional worlds, both Robert Rankin’s The Hollow Chocolate Bunnies of the Apocalypse and Jasper Fforde’s The Big Over Easy center around a detective investigating the egg’s murder. In the former, Humpty survives the fall from the wall, but is boiled to death in his own swimming pool. The latter presents Humpty as a playboy who has been married several times and had multiple affairs, and has both many friends and many enemies. We also find out what he was supposed to hatch into. And I found out just today that Neil Gaiman also wrote a short story, first published in 1984, with a detective investigating the egg man’s murder. Whether any of these authors were aware of the other tales with the same theme, I couldn’t say.

1 Response to It’s an Egg’s Life