Unfinished Tales, by J.R.R. Tolkien – Some friends of mine were getting rid of a copy of this, and I’d never read it, so I’m now its owner. This 1988 edition of a book originally published in 1980 collects various stories about Middle-Earth that Tolkien never completed to his satisfaction, with notes from his son Christopher. Someday I want to be such a popular writer that every scrap of paper on which I started to write fiction will be professionally published. Not that I think there’s any chance of that happening, but it really strikes me as the ultimate mark of creative success. Anyway, some of these are fairly complete narratives, and others mostly just notes. Middle-Earth isn’t my favorite fantasy world, but I’m impressed by how much detail went into creating it. If anything, I think Tolkien sometimes gets so involved in the language, geography, and culture that his work can read somewhat like a textbook, particularly when he’s just writing descriptions instead of full-fledged stories. The Hobbit and The Lord of the Rings gave us some intriguing characters, but I never got as much of a sense of who the characters really were in The Silmarillion and these unfinished stories. That said, I still enjoyed it, particularly the look at the lost land of Numenor and the back story of Gandalf and his fellow Istari. 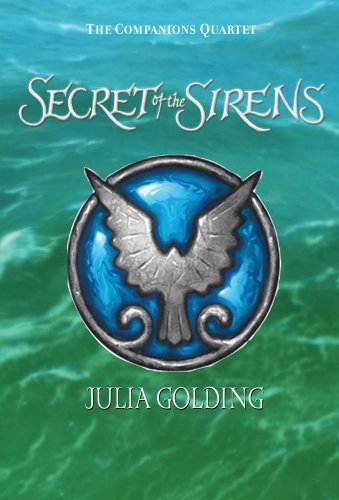 Secret of the Sirens, by Julia Golding – Every time I look at my recommendations on Amazon and Goodreads, I realize just how many fantasy series featuring concepts from classical mythology there are. I’ve enjoyed several of them, but it can sometimes be difficult to pick out the ones that are worth reading. In this case, this first volume of the Companions Quartet was on sale in the e-reader edition, so I decided to check it out. I found that it moves a little slowly sometimes, but overall it was a pleasant read. A girl named Connie learns that some of her relatives and neighbors are involved in a society that protects mythical creatures, and she turns out to have the power to communicate with all animals. In additional to the titular sirens, selkies, dwarves, giants, pegasi, and dragons are also involved in the tale. There’s also an environmental message, with the sirens planning to cause a disaster by wrecking oil tankers, and making an alliance with a being of evil in order to scare off the humans. I didn’t love it, but I liked it enough to want to check out the rest of the series.