I’ve written many times about the references in video games to classical mythology, but I don’t think I’ve yet given Gilgamesh, as he appears in the Final Fantasy series, his own post. The source of his name is obviously the ancient Sumerian epic, one of the first still extant written texts. Like the hero of the epic, Gilgamesh in the FF series is a warrior with a sidekick named Enkidu. In the games, however, he has extra arms. I’ve seen it suggested that this is a reference to a passage in the epic that says “none could withstand his arms,” but this didn’t necessarily mean he had more than two.

Picture by Alice Duke
Enkidu, a wild man who joins civilization (after several days of sex with a temple priestess, no less) and becomes Gilgamesh’s best friend, often appears in the games as a green demon with wings.

Other times Gilgamesh will be accompanied by a dog or even a rooster with the same name and color scheme.

Their first appearance in the series is in FFV, in which Gilgamesh works for the main villain Exdeath. He starts out with two arms, but later morphs to grow six more and holds weapons in many of them. He’s a collector of rare and powerful weapons, but he’s not that good at detecting forgeries. At one point, he uses a sword he thinks is Excalibur, but instead it’s a fake called Excalipoor that does very little damage. 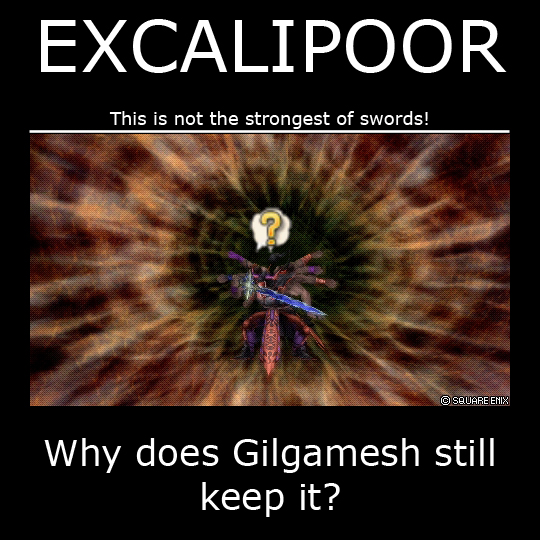 Picture by Samuel Elliot Phillips
He’s a comic relief villain, engaging in banter during battle and frequently running away, but he can be a quite effective fighter when he wants to be. After several fights with the Warriors of Light, he eventually gains respect for them, and helps them defeat a formidable monster.

He ends up in the Void, which is presumably the explanation for how he shows up in other games in the series. Indeed, he frequently mentions Bartz Klauser in later appearances, indicating that he’s actually the same character, not just someone else with the same name and a similar personality.

FFXII continues the gag of his falling for counterfeit weapons by having him fight with fake versions of significant swords from earlier games, including the Buster Sword, the gunblade, and even the Sword of Erdrick from the Dragon Quest series. Apparently the latter is called Tolo’s Sword in the Japanese, “Tolo” being an anagram of Erdrick’s Japanese name Loto. From what I’ve read, this sword actually has a lot of raw power, but is impractical to use. In the English translations, it’s called the Wyrmhero Blade.

I wonder if he also has a phony version of the Master Sword from the Zelda games. Actually, a joke I thought of that most people likely wouldn’t get would be to have him use a plumbing snake called Excalibur as a reference to the “King Mario of Cramalot” episode of the Super Mario Bros. Super Show. See, I told you most people likely wouldn’t get it. Gilgamesh gets around so much that I wouldn’t be surprised if he’s visited the Mushroom Kingdom at some point, possibly in the company of Culex. There’s an interesting bit on the FF Wiki that I actually didn’t know before. Apparently he’s a reference not only to the Sumerian king, but also to the twelfth-century Japanese warrior monk Saito Musashibo Benkei, said to be a giant who stood on Gojo Bridge in Kyoto and challenged every passing swordsman, taking their swords after he defeated them. After winning 999 battles, he is finally beaten by Minamoto no Yoshitsune, and becomes his loyal friend and retainer. Benkei finally makes his last stand on another bridge, killing hundreds of people before dying standing up. It’s a famous Japanese folk tale that might have some basis in reality, as his name appears in documents from the time. His death is estimated to have occurred in 1189, shortly after Yoshitsune committed suicide after being betrayed by his brother. Gilgamesh in the game fights on bridges, takes swords from his opponents, and befriends warriors who win against him. His theme music is called “Battle [sometimes “Clash”] at the Big Bridge.”

By the way, the title is a line from Bender on Futurama. While the reference is likely to the epic, there might be a bit of an in-joke there, as Bender’s voice actor John DiMaggio also voices Gilgamesh in the English version of FFXII.

3 Responses to Suck It, Gilgamesh!