Ixion, King of the Lapiths in Thessaly, was a pretty thoroughly bad guy. He married Dia, the daughter of Deioneus, who is sometimes called Eionenus. He refused to pay the customary bride-price, however, so Deioneus took some of his horses in retaliation. Rather than just calling it even, Ixion invited Deinoneus over for a party, and then threw him into a fiery pit.

Hence, not only did he violate the Greek laws of hospitality, but he also killed a kinsman, being possibly the first person to ever do so. He became widely hated after this, but finally Zeus himself decided to perform a purification ritual, inviting him to Olympus for this purpose. So this guy is repaid for murder and bad hospitality (which was, by the way, something Zeus drowned pretty much all of humanity for in the past) by getting an invitation to the most exclusive club in the world? Well, some sources say that it was because he was interested in Ixion’s wife, and he might have even had a child with her. So it might have been sort of a “you forgive me and I’ll forgive you” deal. Regardless, Ixion messed things up by hitting on Hera. Now, Zeus might make the moves on other people’s wives, but he’s not okay with others doing the same with his. Pretty typical, really. Not that Hera was happy about it either, mind you. So Zeus tricked Ixion into having sex with a cloud that took the form of Hera, and their union gave birth to a guy who got romantically involved with mares and fathered the centaurs.

Is that what happens when your mother is condensed water vapor? When Ixion appears in the Final Fantasy series, it’s usually as a horse-like creature with lightning-based powers, presumably a reference to the centaurs being his descendants.

Zeus kills Ixion with a lightning bolt, but death is hardly the end of his punishment. Instead, he’s chained to a flaming wheel for eternity, with this torment sometimes said to take place in the sky (in which case it would presumably cause lightning) and sometimes in Tartarus.

Interestingly, there’s also a Japanese myth about a guy who was punished in the afterlife by being attached to a flaming wheel, although in this case his head appears to be the only human-like part remaining. This is Wanyudo, a daimyo who would execute people by having them drawn on an ox-cart wheel, so he became a fiery wheel with a face after he died. He’s one of the many yokai that are said to roam Japan and bring torment or death to those hapless people who come across them. In this case, he’s said to steal the souls of anyone who gets close to him. There’s also the story of St. Catherine of Alexandria, a likely non-existent Egyptian princess in the fourth century who converted to Christianity in her teenage years. Emperor Maxentius tried to have her killed by crushing her on a wheel, but it miraculously broke, and afterwards came to be known as a Catherine wheel. While this wheel wasn’t on fire, there is a firework called a Catherine wheel, so that sort of brings us full circle. 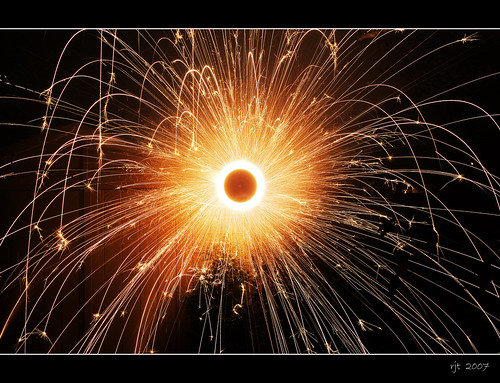 If Wikipedia is to be believed, the use of the wheel for execution wasn’t totally abolished in Europe until 1841. I guess the people in charge of regulating such things were just spinning their wheels.

1 Response to Hell on Wheels