Something I’d been meaning to check out but didn’t until recently was the recent series of Popeye comics written by Roger Langridge, with art by Tom Neely, Bruce Ozella, Ken Wheaton, and John Byrne. Last year, the series was wrapped up with the twelfth issue, and they’re now collected in three volumes. It’s very much in the style of E.C. Segar, using his characterizations and the sort of scenarios he came up with more than anything that had later been done with the character. Indeed, most of the references suggest the stories are taking place around Segar’s lifetime, when hamburgers still cost a dime and westerns were all the rage. There are a few nods to later aspects of the Popeye universe, however, like Bluto being a significant character and the Oyls’ hometown being called Sweethaven. 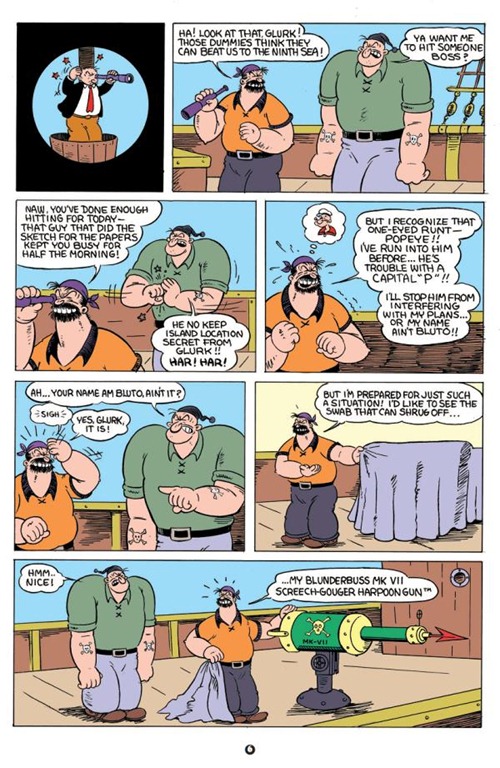 And two of the stories deal with synthetic food, so it at least makes a few nods to modern concerns. Wimpy, Castor Oyl, Alice the Goon, Rough-House, George Geezil, Swee’pea, Poopdeck Pappy, Toar, and the Sea Hag all play important roles; and we even find out what happened to Olive’s old boyfriend Ham Gravy.

Another story features King Blozo and his court, with their country now called Spinachovia. That’s actually the name Popeye used for a nation he founded in a Segar story. Blozo’s kingdom was originally Nazilia, but I have to wonder if modern writers find that name disturbingly close to “Nazi.” The name change is explained with a joke.

There are even a few stories based on Segar’s lesser-known strip Sappo, featuring John and Myrtle Sappo and their mad scientist boarder O.G. Wotasnozzle. In addition to a lot of Segar-style humor, including some rather dark gags about Wimpy raising animals so he can eat them, there are several inside jokes referring to cartoonists and other people involved with Popeye’s history. It’s definitely worth a read for fans of Segar’s original strip.

1 Response to The Spinach Cycle