The Science and Secrets of Red Magic and Art 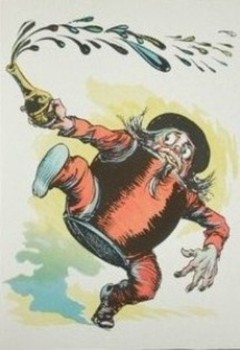 If you’ve read Ruth Plumly Thompson’s Oz books, or for that matter just followed my blog for a while, then I’m sure you know about Jinnicky, the Red Jinn of Ev. I thought I could say a little about the magic he uses, much of which is based around jars and incense. His specialty is red magic, but we never really find out how that differs from any other sort of color-coded magic. Several of his spells seem to involve his spinning around like a top, but he fixes Jack Pumpkinhead’s broken leg simply by clapping his hands. Pigasus is identified as a creation of his, although whether this was through transformation or magical breeding isn’t clear. When he joins Randy and Kabumpo on their journey back to Pumperdink in The Purple Prince of Oz, he brings along several items. His expanding vase is a blue jar that can grow to a large size to protect those inside it, and can only be pierced from the inside.

A yellow jar can automatically grow and fell a tree, which Jinnicky uses to cross a river. His red incense can start a fire when he snaps his fingers four times, and he later uses it in Silver Princess as part of his spell to turn Planetty and Thun to flesh and blood. The blue incense can put everyone in the area to sleep (rendering them insensible; Jinnicky is quite fond of puns), but only works in the afternoons. And the Jinn uses yellow incense to try to restore the disappeared royal family of Pumperdink, although it doesn’t work because they’ve actually been transformed. The Looking Glasses drag the wearer toward whatever they’re looking for, the drawback being that you can’t stop unless you either reach your destination or they’re physically removed. In Jack Pumpkinhead, the Jinn mentions a magic looking glass, which might or might not be the same thing. And in Handy Mandy, the Wizard of Oz mentions having looking glasses as well.

Other properties of Jinnicky’s include a magic umbrella, red reanimating rays, petrifying powder, weapon-turning elixir, a crystal ball that he uses for various magical uses, anti-transformation potion, a candle that can transport a person back home when it goes out, and a magic walking stick that we never see used.

Lin Carter’s Tired Tailor credits him with the Hurry-Cane and Es-Cape, and while his cane doesn’t work quite like the ones in Hungry Tiger, my explanation was that he and the former Pasha of Rash worked together on them. His flying Jinrikisha is his main means of transportation, and his silver dinner bell summons a boy named Ginger who serves meals. Since Ginger materializes from thin air when the bell is rung and then magically transports back to the Red Jinn’s castle, grabbing him can provide a quick ride there. Jinnicky originally had TWO of these bells, but one was lost and ended up in Oz, where Jack Pumpkinhead found it and took it to the Emerald City. When Peter Brown uses this bell repeatedly to produce food to throw at the attacking Scares, Ginger eventually gives him only a bowl of soup, as even magic has its limits. On the other hand, Jinnicky does have some experience with producing unending sources of food, like a water bottle and cookie jar that are never empty, and I believe Ginger brings Kabumpo a magically refilling plate in Silver Princess. The one thing that Ginger cannot teleport out of is a drum.

When Jinnicky encounters a magician named Ozwoz during his travels in Purple Prince, he trades his magic cookie jar for one of Ozwoz’s mechanical wooden soldiers, planning to duplicate them to create an entire army. He presumably never does, however, as such an army would have been of great assistance at putting down the rebellion in Silver Princess. Also never stated is what happens to Biggen and Little, two guards for Baron Mogodore of Baffleburg who tried to capture Ginger and ended up being transported to the Jinn’s domain and working for him. Since Mogodore and all of his people shrink in size at the end of the story, I suppose Biggen and Little do as well.