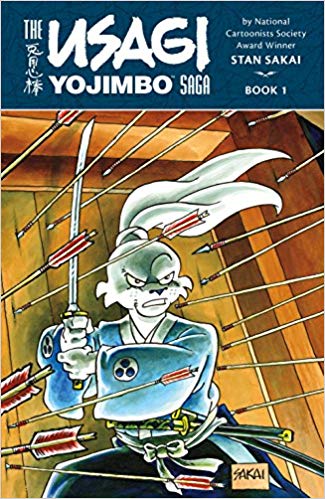 The Usagi Yojimbo Saga, Book 1, by Stan Sakai – It can be confusing to decide which volume of a comic to pick up first, since the numbering tends to become odd after a while. While this is Book 1, it actually consists of the second and third volumes of the comic, the first ones published by Dark Horse Comics. Anyway, I had first heard of Usagi the same way I’m sure many people of around my age did, from his guest appearances on Teenage Mutant Ninja Turtles. He appeared in a crossover in the TMNT comics, and later appeared on the cartoon and as an action figure in the Turtles line.

My brother had him, and somehow managed to break off his ears. I didn’t know it was actually a property outside the TMNT universe until much later, and when I received a recommendation on Goodreads I thought it might be worth checking out. The comic chronicles the adventures of Miyamoto Usagi, a rabbit ronin (basically a samurai without a specific lord) in a version of feudal Japan inhabited by anthropomorphic animals. There’s humor in the stories, but the general premise and the characters are taken seriously, with a significant amount of development. It’s also somewhat educational, in that Sakai did a significant amount of research into Japanese history and folklore in order to create his world. The fox thief Kitsune is based on the legends of trickster foxes, and Usagi battles a tanuki at one point. Another interesting character is the rhinoceros bounty hunter Gen, who has a somewhat complex relationship with Usagi.

The book actually opens with a TMNT crossover, in which a sensei transports all four Turtles to Usagi’s world in order to fight a nasty ninja clan. While the cartoon had Usagi meet all four Turtles at once, this story makes it clear that, in the comic continuity, only Leonardo had encountered him prior to this adventure. 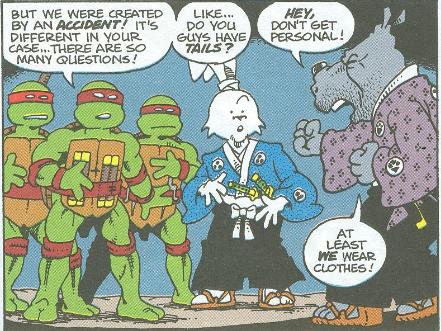