Would You, Could You, with a Goat? 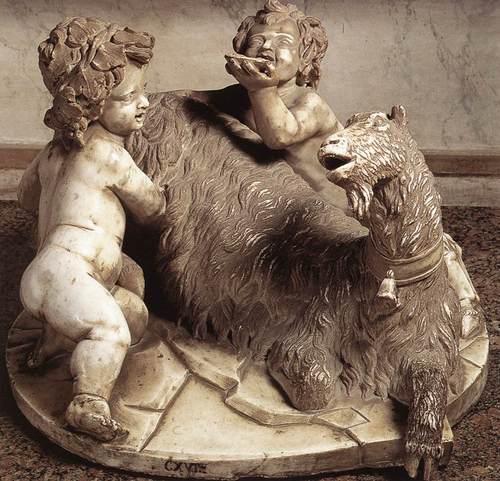 When Zeus was a baby, hidden on the island of Crete from his ravenous father Kronos, he is said to have subsisted on milk and honey. The milk was provided by the goat Amalthea, who was essentially Zeus’s nurse. The name might be related to the words for nourishment and tenderness, which would be appropriate. What’s especially weird is that Amalthea usually seems to be the name given for the goat herself, but sometimes is that of the nymph who tends the goat instead. Other names are sometimes given for the nymphs who hid the divine baby, one that particularly stuck out for me being Melissa, which was an incredibly common name when I was growing up. It basically means “honeybee,” and she was a mountain nymph who gathered honey and provided it to the young Zeus. Her father’s name is generally given as Melissus, and some versions of the myth say that Melissa was eventually turned into a bee herself.

Comic by Robert Crum, Jon Gorga, Brian Hardison, Nathanael Hauser and Betsy Mu. Source: Goat People
The goat Amalthea has several associations with other aspects of Greek mythology. Her horns were said to be able to provide nectar and ambrosia, and when one of them broke off Zeus made it into a horn of plenty. When she appears in Rick Riordan’s books, her udders function like a soda machine, but I don’t know of any earlier indication that they could produce anything other than milk. I like the idea, though. The goat’s hide was made into the aegis, the symbol of Zeus’s power. We don’t entirely know what exactly the aegis was, with its sometimes being interpreted as simply a goatskin Zeus carried around, but other times as a shield or breastplate. His daughter Athena would later inherit it and augment it with the head of the slain Gorgon Medusa.

There’s apparently another version of the story where the head is not that of Medusa, but rather of another Gorgon named Aex, a daughter of Helios and nurse of Zeus. Finally, Amalthea herself is said to have been made immortal and placed in the sky as the constellation Capra. If you haven’t heard of it, I don’t blame you, as it’s not now considered an official constellation, instead being part of Auriga. Other nearby stars are said to represent Amalthea’s kids, and Auriga is sometimes depicted as carrying goats. The constellation more commonly associated with goats is Capricorn, and it’s occasionally said to be Amalthea, but the older interpretation is that it’s a goat-fish.

Amalthea has sometimes been linked to Audumbla, the cow in Norse mythology who provided sustenance to Ymir and licked the god Buri out of a block of ice.

4 Responses to Would You, Could You, with a Goat?