I’ve already written about the Duggars and don’t want to devote too much of my blog to those lowlifes, but their interview with Megyn “Santa Is White” Kelly really exposed them as even more monstrous than I might have thought, and this was with a sympathetic interviewer.

Granted, I don’t know what it’s like to be a parent, let alone a parent of a kid who did something terrible to my other kids. It must have been a dilemma for them, and I didn’t expect them to just come out and say their son was scum. I guess it’s a little easier when you’re total misogynists who only see girls as potential baby factories. But the Duggars mentioned themselves that it’s typical for parents to blame themselves for such things, and despite this lip service they really didn’t seem to feel at all guilty. Instead, they kept bringing up how releasing Josh’s juvenile records was illegal. I don’t know whether this is true (I certainly hope it isn’t), but even if it is, isn’t that an argument a lawyer should be making? Ditto for their argument that Josh was technically not a pedophile, especially when they aren’t even facing any legal repercussions. Their arrogance was just so over-the-top, what with their doubling down on the insinuation that transsexuals are all child molesters and the repeated statement that everybody does bad things. Well, sure, if you cast a really wide net for bad behavior. Certainly most families haven’t done anything comparable to this. My wife likes to remind me of an inmate on Lockup who insisted that God saw stealing a cracker as equal in severity to murder, and Jack Chick has said much the same thing. It’s a dangerous doctrine that strikes me as pretty much encouraging people to commit atrocities and then half-heartedly ask for forgiveness, and while the Duggars didn’t specifically mention it, their excuse sounds very similar.

Besides, isn’t God only supposed to forgive if you actually repent? I don’t know if Josh is feeling any remorse, but it seems that the complicit parents are only concerned with keeping their television show and silencing the people they call “critics.” Not to mention my repeated point that assuming you know what the Almighty thinks is pretty much the height of arrogance. 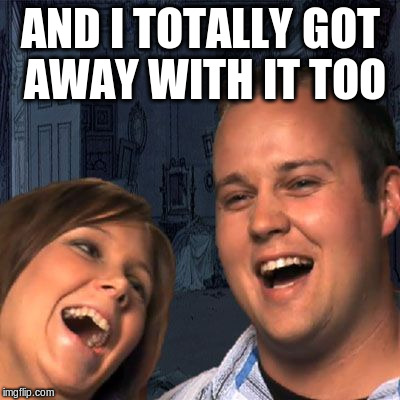 1 Response to Ditch-Delivered by the Duggars