Better Watch Out, You Bad Boys

The Angry Video Game Nerd recently did a review of the Darkwing Duck game for the TurboGrafx 16, which I do seem to recall hearing about when it was new, but very little about it since then. I guess that’s the case with the system itself as well.

My brother had the NES Darkwing game, and I remember it as being pretty good, but rather short.

The mechanics were a lot like Mega Man, which is not surprising as it was made by Capcom. There was a stage selection feature and you could switch between weapons, in this case different sorts of gas for the gas gun. I do remember being a bit confused by the choice of villains, however, particularly with Steelbeak as the big boss in both the NES and TurboGrafx versions.

These Capcom games based on Disney properties often combined familiar enemies with new ones who fit the basic aesthetic. DuckTales had Flintheart Glomgold and Magica de Spell, and the Beagle Boys showed up from time to time.

I understand that, in the remastered version, some of the Boys are elevated to miniboss status.

I know the Terra-Firmie King was on the show, although he didn’t have a beard and couldn’t turn into a buzzsaw; and I believe the Yeti was as well. The Inca statue, the giant rat, and Dracula Duck were new, but they didn’t seem too out of place. From what I’ve read about the remastered game, it reveals Drac’s real name to be Drake von Vladstone.

I’ll bet whoever came up with him was upset that the name “Count Duckula” had already been taken.

Chip ‘n’ Dale Rescue Rangers obviously had Fat Cat as the main boss, but there was no trace of the series’ other main recurring villain, Professor Norton Nimnul (although the robotic dogs that showed up in the first level were his creations on the show).

With Darkwing, I would think the obvious choice for main boss would be Negaduck, a palette swap of the hero (something we’ve certainly seen in enough video games) who was basically DW’s arch-enemy and a leader of several other bad guys.

Steelbeak was certainly more competent and less wacky than most of the show’s other recurring villains, but he wasn’t really a leader, as he worked for F.O.W.L. High Command. While most of the other main villains usually worked alone, Quackerjack and Megavolt teamed up pretty often, and a few episodes made them part of the Fearsome Five along with Negaduck, Bushroot, and the Liquidator. Quackerjack, Megavolt, and Bushroot were all stage bosses; and I would guess they left out the Liquidator for the same reason he wasn’t in that many episodes of the cartoon, which is that it was too hard to think of ways to defeat a guy made of liquid. Also present was Moliarty, not affiliated with F.O.W.L. or the Fearsome Five but a fairly regularly appearing villain. Then there was Wolfduck, who was never on the show at all.

It’s not like Darkwing fighting a werewolf was all that far out of left field. I mean, he fought a vampire potato in one episode. Still, didn’t the show have other villains they could use? I would think an obvious choice would be cleaning-obsessed F.O.W.L. operative Ammonia Pine, as a boss armed with a vacuum cleaner and mop has a lot of potential.

And even sticking to characters who made at least two appearance by the time the game was released (although, to be fair, I don’t know just how long game development took), there was also Tuskernini (who DID appear in the TurboGrafx game) and Jambalaya Jake.

Oddly, Negaduck does show up in the art for a Russian pirated version of the game for the Sega Genesis, even though you still don’t fight him. 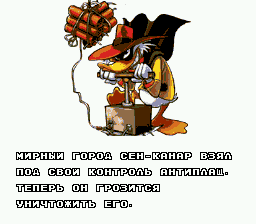