You Should Sea This Lady

I attended the Coney Island Mermaid Parade today, and I noticed that the King and Queen of the Parade are referred to as King Neptune and Queen Mermaid. Doesn’t seem entirely congruent, but there you go.

I’m not sure why they didn’t name the Queen after Neptune’s wife, but I guess she’s just not the staple of pop culture that her husband is. As you probably know if you’ve studied mythology, Poseidon‘s wife is named Amphitrite; and her Roman counterpart is Salacia, meaning “salty.” 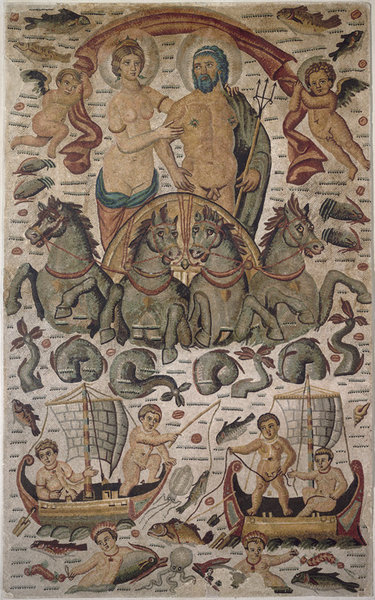 She’s a sea nymph, sometimes identified as an Oceanid, but other times as a Nereid. Since Nereus was the son of Oceanus, this would be a difference of one godly generation. Since Greek mythology considered Poseidon to have taken over control of the sea from Oceanus, perhaps marrying his daughter was a way to make this more legitimate. The official story of how they met, however, is that he saw her dancing and immediately wanted to marry her. She refused, and since gods are known to have a bad habit of not taking no for an answer, she ended up fleeing to the land of Atlas. Poseidon sent a dolphin to seek her out, and he not only found her but convinced her to marry the sea god. As a reward for this, Poseidon placed the dolphin in the sky as the constellation Delphinus. Even after all this trouble, he still had a lot of extramarital sex. When he had an affair with Scylla, Amphitrite turned her into a monster. On the other hand, she was apparently kindly to Theseus, one of Poseidon’s illegitimate sons (well, half-sons), giving him a crown as a gift when he visited the sea god’s palace.

I guess it wasn’t Theseus’ fault that one of his dads was a cheater, but that wouldn’t have stopped Hera. Amphitrite was the mother of the merman Triton, the nymph Rhode who protected the island of Rhodes (whether that made her a Rhodes scholar, I’m not sure), and Benthesikyme.

A common epithet for Amphitrite was Agastonos, meaning “loud-moaning,” so presumably she and her husband have a pretty active sex life. The goddess is often depicted with her hair in a net and pincers on her brow.