I sometimes note down myths or mythical figures I think might make for interesting posts, and one I’ve had as a possibility for a while is Britomartis. The name sounds like the United Kingdom’s equivalent of Walmart, but it’s actually the name of a goddess from Minoan Crete. She was incorporated into later Greek mythology, but her role was lessened considerably, and some of her attributes were transferred to Artemis. 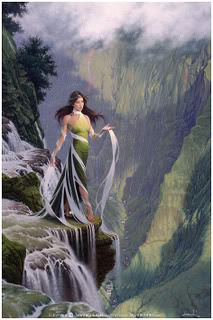 She was a goddess of mountains and of hunting and fishing, with a particular emphasis on nets. Britomartis was sometimes said to have been one of the caretakers of the infant Zeus, but at other times to be his daughter. Hey, with the way things sometimes work with incarnations and all that, I guess both could be true. In what might loosely be considered mainstream Greek theology, the story was that she was a mountain nymph who was pursued by King Minos of Crete, son of Zeus and Europa. She ran from him for nine months, during which time I’m not sure who took care of the business of ruling Crete. So much of Greek mythology would have gone differently if the people and gods involved would have accepted that no means no. Britomartis eventually jumped into a fishing net to escape the king. Artemis then made her a goddess, and the two of them became quite close. They were both regarded as perpetual virgins, but who knows what they got up to with each other when in the deep woods? I guess now the two of them could get married in the United States.

Image by Katherine Bishop
The name Britomartis apparently means “sweet virgin” in an old Cretan dialect, and she was also known as Diktynna, or “netted one.” Edmund Spenser would later shorten the name to Britomart and play on how it could be viewed as a combination of “British” and “Mars,” making her a symbol of British military power in his Faerie Queene.