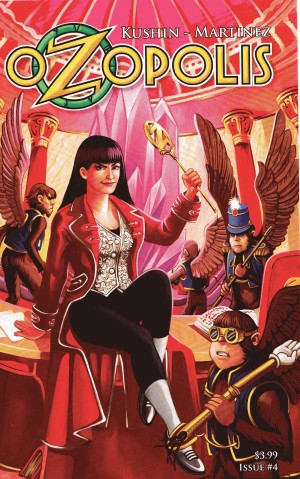 I finally got around to purchasing the third and fourth issues of Kirk Kushin and Gonzalo Martinez’ Ozopolis, a comic series that sticks to the continuity of the original Oz books. It provides the sense of familiarity that I get from the best follow-ups to the series while still allowing the people involved to do their own thing, with character designs rather reminiscent of superhero comics but still recognizable. It’s somewhat modernized, but in ways that make sense with what we know of Oz. After all, there’s really no reason why a frequent traveler like Dorothy WOULDN’T start wearing sneakers, is there?

Seeing her and Trot racing on hoverboards is fun, and the mouse mechanics Klick and Klack reappear to help fight the attacking Giant with the Hammer.

It’s also revealed that Glinda’s Great Book of Records is powered by a group of blindfolded seers, sort of like the precogs in Minority Report. The fourth issue ends the first story arc, but leaves plenty of loose ends. We learn that a lot of the events occurring in the Oz series, including the visits of mortals to the fairyland, were engineered by Glinda’s cousin Synlinda, the Witch of Nowhere.

She’s temporarily defeated, but the Magic Belt remains missing, Glinda is left in a trance, and Dorothy has been transported to John Dough’s bakery. Ozma gets a chance to exercise her magical powers, and Jack Pumpkinhead becomes ruler of the Ewok-like Yappers. My only complaint is that the issues were very quick reads that left me wanting more.

The cover images were drawn by Sylwia “Saarl” Smerl, whose DeviantArt page is here. Martinez has his here. Also, if you haven’t yet, be sure to check out my reviews of Issue #1 and Issue #2.