I love when people say that gun control is a bad idea because it wouldn’t stop mass murders. I forgot that we can only pass laws if they’re one hundred per cent effective all the time. It might stop SOME mass murders if we made guns a little harder to obtain, no? I guess the subject of guns is weird for me because I don’t really understand the appeal. But then, I don’t understand the appeal of sports in general, and hunting and shooting targets are forms of sport. I can’t say I’m against well-regulated hunting, which certainly serves more of a useful purpose than, say, football. I’m sure most gun owners are responsible, and I can understand the desire to protect your household, but it just seems like guns could easily do more harm than good. One issue I think about is that of depression, and how simple it would be to commit suicide if you had a gun on hand. It’s not like only severely mentally ill people ever consider killing themselves, whatever the popular opinion might be. It takes a lot more work to hang yourself or jump off the overpass, and that means more of a chance to reconsider. I get the impression that many people view guns like security blankets, more something that creates a comfortable illusion of safety than anything that would really help in a practical situation. 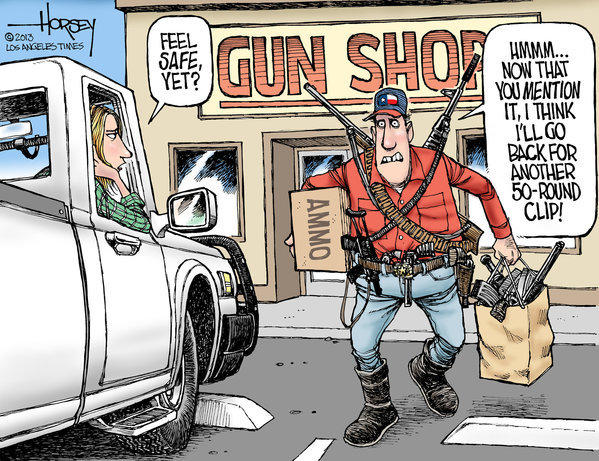 I keep hearing that we need more sane people with guns to stand guard against the insane ones, but unfortunately the world isn’t neatly divided into the crazy and the normal. People who seem perfectly sane can occasionally snap, and those with known mental illnesses are often of no danger to anyone. I think guns being so common can increase the chances of violence even when the people involved are nice and well-trained. There’s obviously no way to totally prevent people from obtaining guns illegally, but not all guns used in crimes are illegally obtained.

One argument I always hear in favor of carrying guns in public places is that, if somebody comes in to rob the place, the gun-toting customers can stop that person. I’m not saying it’s not possible, just that I think it’s a little odd to leave security in the hands of random customers.

And no, you’re probably not being to able to use your gun to prevent tyranny. In case you didn’t realize it, the government has tanks now. The Founding Fathers had some great ideas, but they were by no means clairvoyant.

It seems that gun obsession is considered a largely American trait these days, to the point where people in other nations basically think we’re a country of Yosemite Sam.

It’s kind of weird that the NRA is completely allied to the Republican Party when there are plenty of gun-lovers who are on completely different parts of the political spectrum.

I’m not entirely sure how the association began, but it does seem like Republicans are eager to use violence as the first option. I guess it goes along with being in favor of war and the death penalty, although I’m not entirely certain how many of the same people are virulently anti-abortion. Maybe it’s because fewer babies being born means less cannon fodder. It probably has something to do with the two-party system as well, and how issues that don’t directly relate to right- or left-wing viewpoints have become connected to them. It’s like how the Republicans have become the party of global warming denial, even though you’d think conservatism and conservation would go hand in hand, at least based on the words. Then there’s the combination of guns and religion, even though you’d think having God on your side would mean you wouldn’t need a weapon. Really, the incredible fragility of life is one of many reasons I can’t accept the idea that we were intelligently designed. I’d think an all-knowing being would have used tougher material. Of course, despite the constant insistence that Obama is coming to take your guns (what do you think he’s going to DO with all of them?), the Democrats haven’t been making much of an effort to curtail gun violence either.

When it comes down to it, I’m not opposed to guns per se so much as I am the cheapness of life. There’s not too much we can do about that on a grand scale, but we can certainly make more of an effort to prevent unnecessary violence, right?