We Have to Keep Our Secret Identities Secret

There’s quite a bit to the superhero genre that doesn’t always stand up to close scrutiny, and there are entire websites devoted to detailing some of the more ridiculous storylines, or sometimes just silly out-of-context panels. This Cracked article from two years ago dealt with some of the stupider situations in which superheroes’ secret identities were threatened.

The issue of why heroes even have secret identities comes up every once in a while, but it makes sense in a way. They want to maintain their own private lives, protect their loved ones, and avoid potential legal repercussions. Mind you, that last one might be somewhat outdated with the DNA testing we can do, but that’s hardly foolproof. I’m sure the idea of someone having a double life is as old as the hills, but the predecessor to the modern costumed crime fighter appears to be the Scarlet Pimpernel, followed by Zorro and the Lone Ranger. It was more or less a thing for them to wear thin disguises and often not bother altering their voices. But then, what are the odds that someone who comes across a superhero would also know their civilian identity? Much greater with someone like Batman for whom both identities are famous, but a lot of the time the civilians are unknown to the general public.

I have to wonder if the secret identity theme is losing its appeal, since it seems like a lot of modern superhero media are more or less discarding it. The Hulk, Iron Man, Captain America, and Thor all started out having secret identities in the comics; but this was later dispensed with. 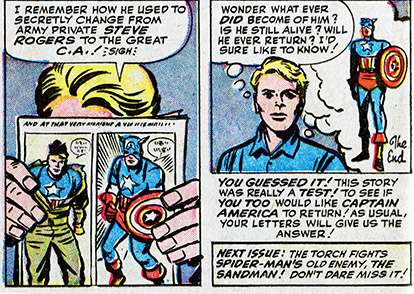 In the Marvel Cinematic Universe, Bruce Banner and Tony Stark only kept their identities secret for a little while, dispensing with them before joining the Avengers. And Thor only bothered to hide his identity for a very brief time in his first movie. Most of the time he’s a god and prince who just happens to hang around on Earth occasionally, and no one appears to care all that much. The Sam Raimi Spider-Man films had pretty much every significant character except J. Jonah Jameson, as well as a bunch of people on a subway, find out that Spidey was Peter Parker. Granted, it’s unlikely anyone on the subway would have known Peter, but any one of them could have taken a cell phone photo and sold it to Jameson. The Christopher Nolan Batman movies were also big on having just about everyone find out who Batman was, but it’s not like that version of Bruce Wayne ever seemed particularly interested in keeping the secret. Yeah, if Batman and Wayne disappear at the same time and then come back at the same time a few years later, THAT’S not at all suspicious!

I haven’t seen any of the more recent takes on Superman, but I’m inclined to think it’s still the case that nobody recognizes him when he puts on glasses and acts clumsy. 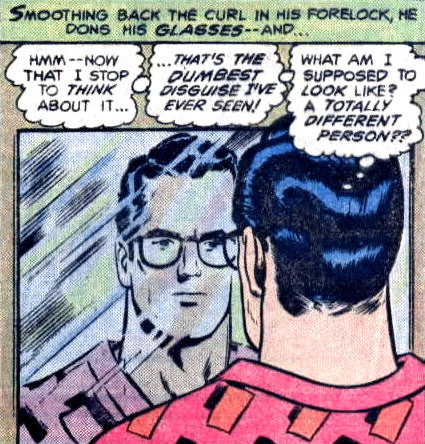 I’ve seen several different explanations for this, including that people just don’t want to believe an awkward guy is Superman even if they look the same, and that he has some sort of hypnotic powers. As this article points out, the thing about protecting loved ones doesn’t really work with Clark, since Lois Lane is always hanging around both of his identities. It’s like how no one is able to determine who Darkwing Duck is even though his non-costumed sidekick lives with Drake Mallard.

Then again, that’s supposed to be a funny series, and they did several jokes about it. There was one episode where Drake went to a costume party in his Darkwing outfit and his dim-witted neighbor Herb Muddlefoot insisted the real Darkwing was taller. (I think they did the same basic joke once on the original Teenage Mutant Ninja Turtles cartoon.) In another, Megavolt finds out Darkwing’s identity (they went to high school together), but DW doesn’t even bother to do anything about it because he knows the brain-fried villain will promptly forget.

Overall, I think secret identities still have their place, but it makes sense for writers to throw them out when they’re no longer necessary or effective. Most of all, I think we can all do without any more instances of the soap opera situation where Superman and Clark Kent have to show up at the same place at the same time. Can’t Clark just call in sick?

8 Responses to We Have to Keep Our Secret Identities Secret