All the Girls Love Annis

Sometimes I feel like I should save posts on wicked witches until October, but I’ll probably forget before then. So here’s Black Annis, the local witch of the Dane Hills in Leicestershire, England. While descriptions vary somewhat, she’s often described as a terrifying and towering hag with a blue face, fangs, only one eye, messy hair, and iron claws.

She lives in a cave in the side of a cliff that she scratched out with her own claws, and has a fondness for human flesh. Her main targets are children, whom she’ll capture from her hiding place in an oak tree near her cave, or steal through the windows of houses. 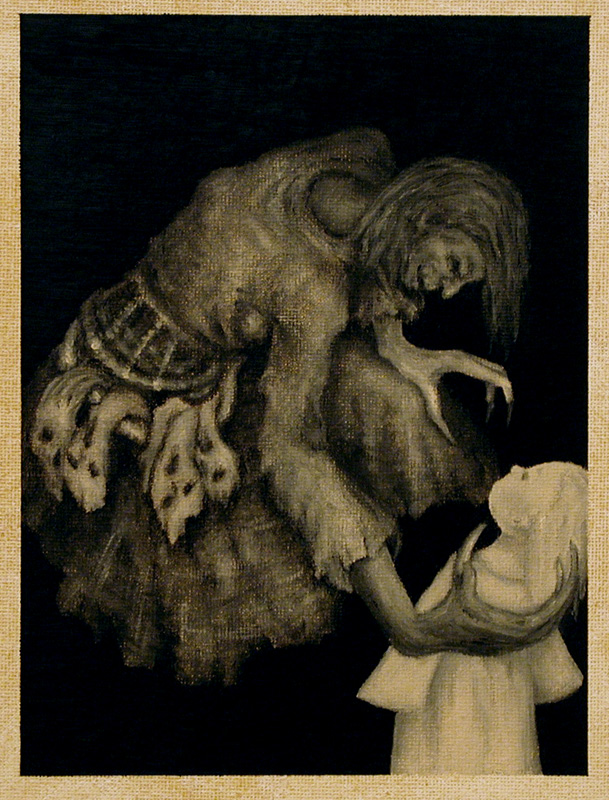 Picture by J Harren
She’ll also swipe sheep, because she needs to vary her diet somewhat. Before eating her victims, she’ll skin them, then either hang the skins in her cave or wear them around her waist. Since she’s English, I assume she boils the children before eating them. It’s also said that she can change shape, sometimes appearing as a large cat. Annis was used as a boogeyman figure in the area, with parents warning their kids not to go out at night because the witch might get them. She apparently never goes out in the daylight. This page reports that she once cursed King Richard III while he was on his way to the Battle of Bosworth in 1585.

As with most legendary figures, there are several proposed explanations as to where Annis originated. One is that she’s based on the Celtic goddess Anu, about whom little is known for sure, but some sources identify her as a mother goddess and a bringer of plenty and good fortune.

As such, the nasty old hag would have been a vilified version of Anu. Historian Ronald Hutton claimed that Black Annis was inspired by a real person, a nun named Agnes Scott who lived in a cave in the Dane Hills. While she presumably didn’t eat children, the rise of Protestantism led to a distaste for the anchorite lifestyle, in which women basically shut themselves off from the world.

As a fan of Terry Pratchett’s Discworld series, I also feel I should mention his character Black Aliss Demurrage, obviously named after Black Annis. Always treated as a historical figure in the books, she’s described as the quintessential fairy tale witch, living in a gingerbread house and known for putting a castle to sleep for a century (which she actually did by manipulating time). While incredibly powerful, she let the power corrupt her, something Granny Weatherwax is always careful not to allow. She was killed by being pushed into her oven by children, like the witch from Hansel and Gretel.