Salmoneus Come Up, Salmoneus Go Down 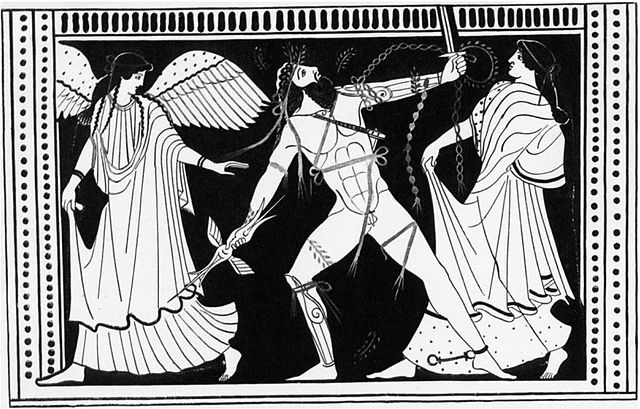 I’m sure you know about Sisyphus, but pissing off the gods was apparently a habit in his family, as evidenced by his brother Salmoneus. The two of them were grandsons of Hellen, father of the Hellenes and son of Deucalion and Pyrrha, the couple who survived the great flood. Their father Aeolus was the founder of the Aeolian tribe that originated in Thessaly. Salmoneus led a band of settlers from Thessaly to the Peloponnesus, where he ruled the kingdom of Salmonius from the city of Elis. With his first wife, Alcidice of Arcadia, he fathered the beautiful Tyro, whose name apparently means “cheese.” It’s been said that this was due to her fair complexion, which was the color of goat cheese. I don’t think the Greeks had heard of gouda at that point. When Alcidice died, Salmoneus married Sidero, who mistreated her stepdaughter. Sisyphus, who ruled in nearby Corinth, had the desire to bring down his brother, although I can’t say I know why. An oracle told him that, if he had children with Tyro, they would kill Salmoneus. Despite the fact that it meant sexing up his niece, Sisyphus went through with this, but Tyro ended up learning the prophecy and killing their children. So I guess the prophecy was actually prevented, which is rare in such stories. At some point, Tyro was married to Cretheus of Iolcus, who was also her uncle. Yes, this was one messed-up family. Tyro and Cretheus were the parents of Aeson, father of the famous Jason. Tyro also fell in love with the river god Enipeus, but he never returned her affection. So Poseidon disguised himself as Enipeus and had his way with her, resulting in two sons, Pelias and Neleus.

Picture by Kallithrix
Salmoneus, suspecting that they might have actually been more of Sisyphus’ spawn, ordered them left on a mountain to die. That never seems to actually work in mythology, however, and they were raised by a herdsman. Eventually, they learned of their true parentage and killed Sidero for her poor treatment of their birth mother. Pelias ended up killing Sidero in a temple of Hera, which is why the Queen of Olympias came to despise Pelias and support his rival Jason.

In the end, it was not Salmoneus’ double-dealing, death-defying brother who led to his death, but rather his own pride. He decided to have his subjects worship him as a god, and to appear the part he would ride a chariot dragging pots and pans while throwing torches into the air, to produce the illusion of creating thunder and lightning. Zeus wasn’t too happy about this, and he decided to make an example of the mortal by striking him dead with a lightning bolt and sending him to Tartarus. His punishment in the afterlife was apparently not as well-known as his brother’s. Maybe it involved undercooked chicken.

1 Response to Salmoneus Come Up, Salmoneus Go Down