I’ve said before that most of my knowledge of the X-Men franchise comes from the 1990s cartoon, but I did recently check out a few collections of the comics from the library. The X-Men comic started in 1963, created by Stan Lee and Josh Kirby, is a superhero story that deals with prejudice and civil rights.

Professor Xavier and Magneto came to be seen as parallels of Martin Luther King and Malcolm X, although they don’t exactly fit. After all, they’re both white, and Malcolm X wasn’t a terrorist. Also, the X-Men started out as four white guys and one token white woman.

They later became much more diverse, however, and one of those white guys turned blue.

Obviously the similarities to civil rights movements don’t entirely work when some mutants have powers that are genuinely dangerous, essentially built-in weapons. That’s still no reason they should be hunted down or isolated from society, though. It’s a little confusing because mutation is something that happens all the time, but it doesn’t generally grant superpowers. From what I’ve seen, the explanation for the super-mutants (whom the Professor has dubbed “Homo Superior,” which I’m sure doesn’t help curb the anti-mutant prejudice) is related to one specific gene, although that doesn’t explain how it can affect totally different parts of the body. The Professor has a machine called Cerebro that he uses to scan for mutants, but I don’t think it’s ever indicated whether he mostly just finds people with an extra toe or something. Not to mention that people in the Marvel Universe seem quite fine with superheroes who weren’t born with their powers, as if it would really make a difference to laypeople.

The comics I recently read were mostly from the 1980s, dealing with the introduction of Kitty Pryde and Jean Grey’s stint as Phoenix.

The Phoenix Saga was incorporated into the cartoon, but I don’t think I saw enough relevant episodes to get a good overview. It’s also pretty complicated in the comics. From what I’ve gathered, the Phoenix Force is a cosmic entity that takes control of Jean, a sort of thing that happens surprisingly often in the Marvel Universe. With her newfound power, she saved the universe, but was later manipulated by the villain Mastermind into becoming the evil Dark Phoenix. 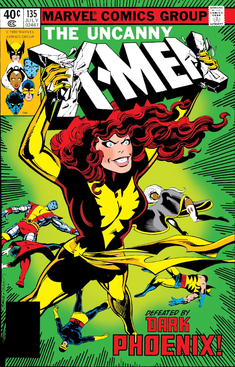 In this form, she devoured a star, causing all life on an orbiting planet to die out. Phoenix committed suicide after that, but it was later found that this being wasn’t actually Jean, but some sort of doppelganger of her. Still, remnants of each remained within the other. It’s utterly convoluted and doesn’t really make sense, but I do appreciate how comics pretty much always provide an out, providing you don’t mind outlandish plot devices. 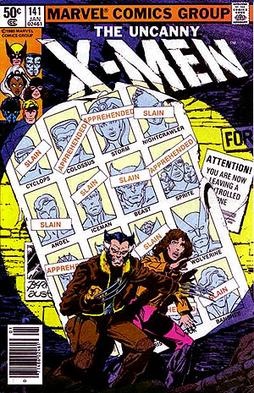 Another storyline was Days of Future Past, in which an adult Kitty in the year 2013 (that was the future back then, remember) sends her consciousness back in time to prevent the assassination of Senator Kelly by Mystique. This was the basis for both a story arc in the cartoon and the 2014 movie, although it was Bishop who went back in time in the former and Wolverine in the latter (although Kitty is involved). I haven’t seen the movie, but I remember several episodes of the cartoon ended with Bishop returning to the future and declaring that nothing had changed. Of course, he could keep going back and trying again.