Everyone Who Counts Loves Ned Flanders

I’ve been looking at TV Tropes, and I’ve noticed several mentions of how Ned Flanders has changed over the many seasons of The Simpsons, to the extent that they use the term “Flanderization” for a character’s traits being vastly exaggerated over time. It’s been pointed out that, since the Bush administration, he’s been played up as more of a Religious Right Moral Guardian type. There were hints of this earlier on, but for the most part he started out as a guy who truly practiced turning the other cheek, not trying to dictate anyone else’s behavior except in extreme circumstances. Indeed, this aspect of his character was exaggerated as well, to the point where the eighth season episode “Hurricane Neddy” had him release all his pent-up anger at once and have to learn how to express it in healthier doses.

This was a significant episode in explaining Ned’s character, and even incorporated a brief flashback from an earlier episode in which his parents were beatniks.

I remember there being some discussion online over the bit where Dr. Foster tells Ned that his diddly-doodly verbal tics are a result of his being unable to get angry, and whether that means he’s ALWAYS inwardly mad when talking like that. It’s also noteworthy that the psychiatrist shows a recording from thirty years earlier in which Ned is a kid, but the later episode “Viva Ned Flanders” claimed he was sixty. 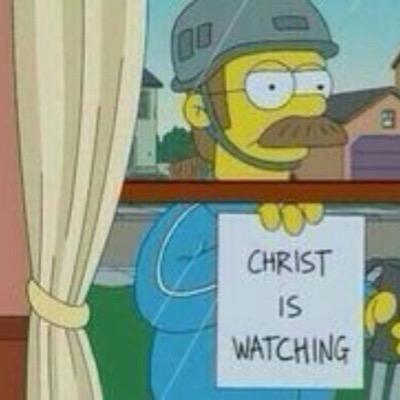 While being deeply religious has been part of Ned’s character since very early on, the earlier seasons tended to focus more on how his family was better off than the Simpsons, and while he never intentionally rubbed it in anyone’s face, you could still understand how Homer could get irritated by the fact. The episode that made the most of this premise, “Dead Putting Society,” also started the running gag of his calling Reverend Lovejoy about every little problem, which became a plot point in “In Marge We Trust.”

Again, it makes Ned seem oblivious because he’s always annoying the Reverend, but he’s doing it out of respect and a desire to do the right thing. His dullness also becomes important in some episodes, particularly when the Simpson kids come to live with him in “Home Sweet Home-Diddly-Dum-Doodly.” The weird thing is that his established traits occasionally seem to contradict each other, like how some episodes show his house having a fully stocked bar with fancy beer, while in others he doesn’t drink. He’s the head of the PTA, but sends his own kids to private school (although this isn’t totally consistent from one episode to another either). Also, he’s sometimes someone with incredible luck who always comes out ahead, and other times as either a tragic figure or someone who’s forced to take Homer’s abuse with gentle good humor. He’s now established as twice a widower, but this was due largely to real-life circumstances; Maude died after her voice actor Maggie Roswell had temporarily left the show, and Mrs. Krabappel died when Marcia Wallace did. He’s also not quite as well-off these days, with “Thirty Minutes Over Tokyo” showing him attending meetings on how to save money after his store, the Leftorium, receives competition.

More recently, his store has been reduced to half a kiosk. Another oddity is that he had premarital sex in “A Star Is Born Again,” which seems out of character, but to be fair I don’t think the Bible is actually as down on this as modern Christians claim it is.

Obviously Ned has always been pretty SOCIALLY conservative, but it seems to be a more recent development to make him politically conservative as well. I’m not entirely sure when it started, and there are certainly some hints of it early on, like Ned having a diploma from Oral Roberts University in “I Love Lisa,” and telling Bart that schools should have mandatory prayer in “Cape Feare.” There’s also the implication that his incredibly repressive upbringing of Rod and Todd is part of what makes them so suggestible.

He has a petition to ban medical marijuana in “Weekend at Burnsie’s,” reveals that he never gets Rod and Todd vaccinated in “The Computer Wore Menace Shoes,” promotes Creationism in public schools in “The Monkey Suit,” and watches practically every show on television to screen for objectionable content in “You Kent Always Say What You Want.”

In the latter, Ned tells his sons that he’s “[i]mploring some people I never met to pressure a government with better things to do to punish an innocent man for doing something that nobody saw. That’s what I’m doing!”, to which Rod replies, “Daddy, we think you need a new mommy.” While the writers’ reasons for emphasizing these traits in Ned might have been due to politics, this is probably a hint that the in-universe explanation could be that he’s channeling his grief over Maude’s death into championing conservative causes. It’s noted on TV Tropes that the Simpsons Movie downplayed this, instead portraying Ned as kindly to the extent that Bart prefers being around him to Homer. He also makes Bart a really elaborate cup of hot chocolate, despite the fact that he doesn’t let his own kids eat sugar (although that could be at least partially because Rod has diabetes).

A recent episode has other characters tell Homer that he’s the only one irritated by Ned, but to be fair, Reverend Lovejoy isn’t in this group.