I can’t say I’ve ever really had the urge to “ship” characters (meaning to favor two fictional characters hooking up for romance and/or sex) that a lot of fans have. People can get quite adamant about such things, to the point where they’ll object to relationships the actual author put together. That’s not to say some official couples don’t get together in rather unconvincing ways, but it’s still a bit overdone. Apparently enough people have objected to Ron Weasley and Hermione Granger getting together that even J.K. Rowling has admitted it might have been a mistake, and that she did that for personal reasons. I’m not sure what those personal reasons are, but I’m pretty sure she’s said Hermione is sort of a combination of herself and her sister.

Some fans have wanted to get Hermione in a relationship with Harry, although I don’t think I’ve really seen any particular reason for this other than that they’re the main hero and heroine. I think I might have seen someone say they were worthy of each other, as if getting along was irrelevant. 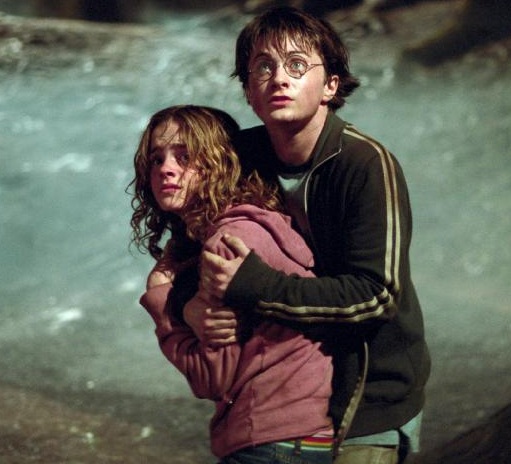 It’s been a while since I’ve read the Harry Potter books, but I seem to recall Harry and Hermione being good friends who didn’t really have much in common, and there were no hints that the two of them had any romantic feelings for each other. I also have to wonder if this notion of worth was influenced by the movies, which really played up Ron as comic relief and had an actress playing Hermione who was better looking than the character was described. That’s typical for movies, although I didn’t think the actress playing Ginny Weasley was particularly attractive. That’s just personal preference, though; no offense intended to Bonnie Wright. Why do they all have to hook up with childhood friends, anyway? I have the feeling that’s typical among wizards, not just because some of them (but not any of the leads) are prejudiced against Muggles, but because they’re so isolated. It’s kind of weird when you consider that Harry ended up marrying his best friend’s sister, who was ALSO a redhead like the mother he never knew but idealized. It appears that a lot of fan-fiction writers preferred the idea of Harry getting together with Draco Malfoy, on the basis that people who utterly despised each other would have really good sex. Funny how the major character who actually turned out to be gay was just about the only one who WASN’T the subject of slash fiction (at least that I know of; I’ll admit I haven’t done much research).

Rowling also considered getting Neville Longbottom and Luna Lovegood together after fans suggested it, and there was even in a line in the last movie where Neville admitted to having a thing for Luna, but she eventually hooked them up with a minor character and a character who didn’t even appear in the books, respectively.

I wonder if the Percy Jackson books assuaged anyone who wanted Harry and Hermione together, since they DID have the main hero hook up with the girl who’s super-intelligent and occasionally obnoxiously so. Mind you, the other person in their adventuring trio was a satyr. Percy and Annabeth did both have other love interests, but Rachel Dare turned out to just be in love with Greek mythology in general, while Luke Castellan became a villain and then made a heroic sacrifice.

It seems like love triangles are all the rage in fantasy fiction these days, although I think the definition of “love triangle” gets stretched a bit. It’s usually just two people interested in the same third person, while the “triangle” term makes it sound like there’s a more direct relationship between the other two. For instance, I haven’t read the Twilight series, but everyone knows their triangle was between Edward, Bella, and Jacob. But since it was just both Edward and Jacob wanting Bella (why, I have no idea), isn’t that more of a simple love angle?

Just have a personality-free threesome already!
If Edward wanted Bella, Bella wanted Jacob, and Jacob wanted Edward, THAT would be a triangle. I suppose you don’t even need that third one in there, but it makes sense to me. Mind you, the whole thing seems kind of pointless anyway, since isn’t the series supposed to be about Bella and Edward’s timeless romance? As far as I know, Jacob isn’t much more than a plot obstacle, and Team Jacob likely knew all along they weren’t going to win. Of course, Jacob manages to find happiness with Edward and Bella’s daughter. That’s incredibly convenient, if by “convenient” you mean “super-creepy.” Harry Potter did the love angle thing occasionally, as with Harry and Cedric Diggory both being interested in Cho Chang. The most significant one was how Severus Snape and James Potter both had feelings for Lily Evans. Since one became a racist and the other was a bullying jock, I’m not sure why she would have wanted either of them. Did she get together with James just to spite Snape?