The Royal Ships of Oz

While I don’t think shipping has ever been quite as common for Oz as for many other fandoms, it’s definitely been gaining prominence as of late. Not surprisingly, one of the main targets is the beautiful and powerful Ozma, who also has had the unusual experience of being both a boy and a girl. Some people have read Ozma and Dorothy as essentially a couple in the later L. Frank Baum books, although they’re generally portrayed as too young for their relationship to be sexual.

(Okay, it would be POSSIBLE to have sex at around fifteen and eleven, but a little disturbing for a children’s series.) I read a fanfic recently that had Ozma and Dorothy getting married. Dorothy has been paired off with other characters as well. I’ve seen a few stories where she ends up marrying Ojo, and Ron Baxley Jr.’s work brings in a new potential love interest for the heroine from Kansas. Pretty much all of the characters had children in the non-canonical Oz Kids series, but I believe the only actual couples hinted at were Dorothy and Zeb Hugson and the Scarecrow and the Patchwork Girl. Zeb identifies himself as Dorothy’s cousin in Dorothy and the Wizard in Oz, but the way he does so makes it clear they’re not actually blood relatives. 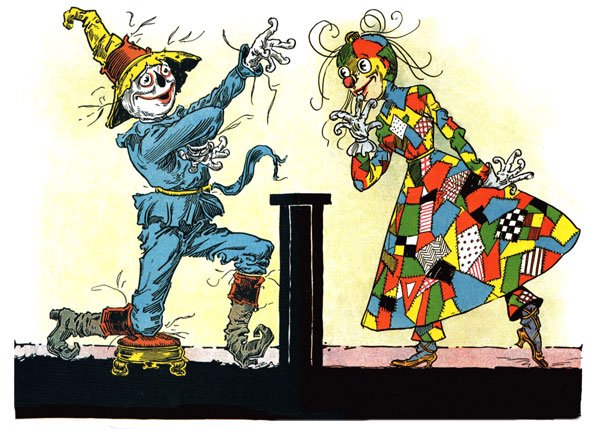 The Scarecrow and Scraps are also popular candidates for marriage, although some think his relationship with the Tin Woodman is basically marriage in all but name, especially as portrayed in Tin Woodman.

In Melody Grandy’s Forever, Zim uses his healing magic to give Nick back his flesh body, and he gets back together with his old flame Nimmie Amee. A story by Aaron Adelman gave him a wife made of gold named Cynthia Cynch, after his girlfriend in the Wizard of Oz stage play. And the animated adaptation of Tin Woodman created a Tin Girl for him.

Other characters are more or less hinted in text to have eventually become more than friends. I’m not the only one who thought Prince Inga would get together with Zella, and Ryk Spoor’s Polychrome and a David Hulan piece for the Emerald City Mirror confirm this. 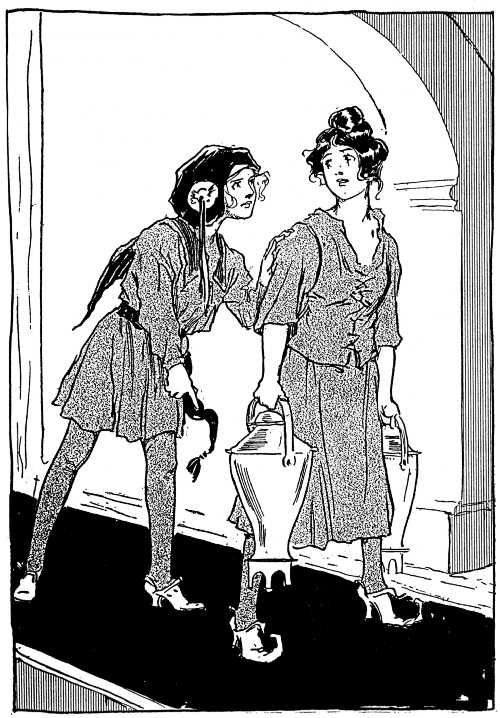 While Jenny Jump and Number Nine end Wonder City as pre-teens, I don’t think it’s too far-fetched to think they’d age a few years and then marry.

Ruth Plumly Thompson specifically states at the end of Speedy that she thinks he’ll eventually return to Umbrella Island and marry Princess Gureeda, but it still remains somewhat ambiguous.

They tie the knot in Ruth Waara’s Umbrella Island, while March Laumer’s Umbrellas subverts things by having them both end up with other people. In Hungry Tiger and Giant Horse, respectively, Betsy Bobbin and Trot become friendly with princes of around their age, but I tend to doubt Thompson intended this as a hint of budding romance. On the other hand, I got the impression that Handy Mandy was somewhat older, and I could see her hooking up with King Kerry of Keretaria.

I think I’ve seen at least one person other than myself suggest Prince Bobo marrying Princess Fluff of Noland, although Royal Explorers gives hints of a possible relationship between Bobo and Princess Truella of Mo instead.

Bringing stage and screen interpretations into the mix complicates things further, as Baum himself was prone to having characters get together in his plays. I believe The Tik-Tok Man of Oz (at least one version of it) ended with Betsy getting together with Tik-Tok (which I don’t think would even be possible as the mechanical man is written in the books) and the Shaggy Man with Queen Ann, while Ruggedo and Polychrome acknowledge feelings for each other. This latter actually IS hinted at in the Tik-Tok book, but in a more humorous way.

Laumer’s Oz books contain a lot of bizarre romantic entanglements. The Shaggy Man has a crush on Dorothy (yes, the age difference is discussed), and Polychrome has a thing for him. Ozma is also romantically interested in Dorothy, but she ends up marrying a man. The Cowardly Lion goes through with his arranged marriage to a lioness named Regina. Gayelette is turned into a giant frog and begins a relationship with the Frogman, while her former husband Quelala gets together with a girl from Unnekegwick. Glinda marries an adult Button-Bright, and an older Betsy gets involved with Carter Green. Finally, King Cheeriobed and Queen Orin get divorced, then remarry under assumed identities.

Stories by other authors have brought in original characters as love interests for familiar ones. Phyllis Ann Karr’s Maybe the Miffin and Jay V. Groves’s “Nero Zeero: Snoz of Oz” make Snif the Iffin and Queen Ann’s relationships central to their plots.

Toto was paired with a Scottish Terrier named Labyz in Chris Dulabone’s work, and a dog named Tita in Baxley’s. Baxley also gives the Wizard of Oz a wife, a music teacher named Madam Staffia. Charles Phipps’s The Engagement of Ozma introduces the Hungry Tiger’s mate, a white tiger named Sita, with Tige’s own name being established as Rama. Richard Quinn’s Red Reera the Yookoohoo sees Reera married to Prince Glenn of Portmore, and King Rinkitink to his childhood sweetheart Trinket. 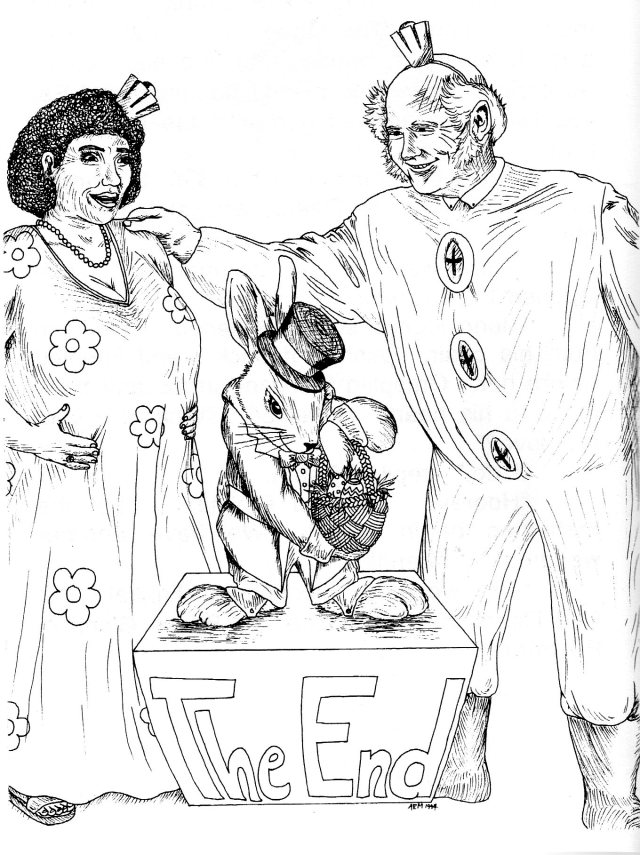 In Polychrome, the Rainbow’s Daughter herself marries the mortal hero Erik Medon. Gina Wickwar’s Hidden Prince, on the other hand, suggests the beginning of a relationship between Polychrome and Prince Vitrix of Silica.

Tandy has a romantic relationship and even kids with the mermaid Chrysalissium (Sally for short) in Royal Explorers, although it’s cut short when she dies in an alternate dimension. 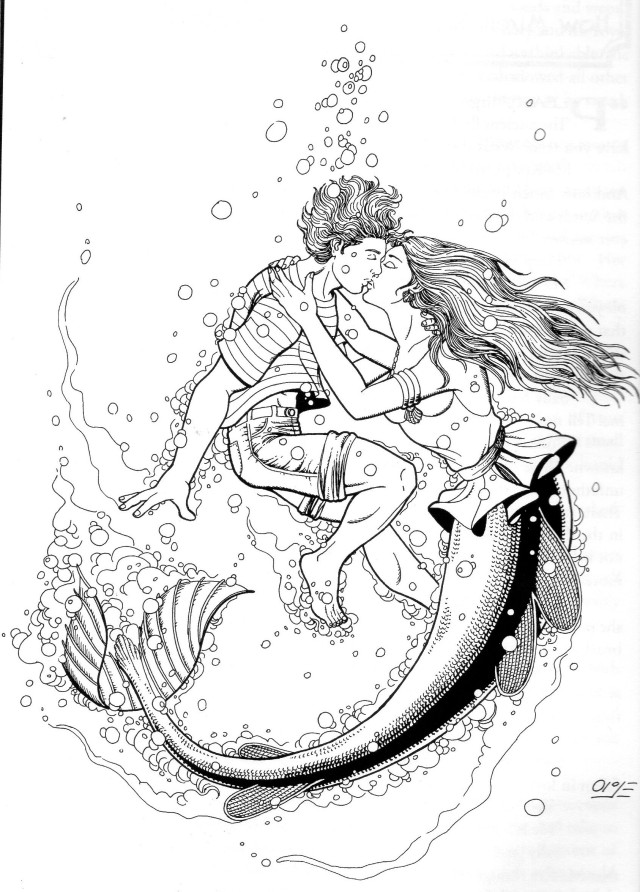 Dave Hardenbrook gives boyfriends to both Ozma and Jellia Jamb, and Grandy originally thought of Zim as a possible husband for Glinda. Hulan’s Glass Cat has Salye Soforth befriend Lando, the least bad of the Bad Lads, and has suggested that their friendship could develop into something more.

I’ve never seen anyone suggest a marriage for Wag from Kabumpo, even though he expressed the desire. But then, that was before he gained his enormous size. And the Thompson characters tend to be less popular for shipping anyway, although I have mentioned some exceptions (Speedy, Carter, Snif, and Tandy, for example). I don’t suppose there are any bugs Professor Wogglebug’s size for him to date either, although he’ll presumably always be in love with a fabric pattern.

17 Responses to The Royal Ships of Oz