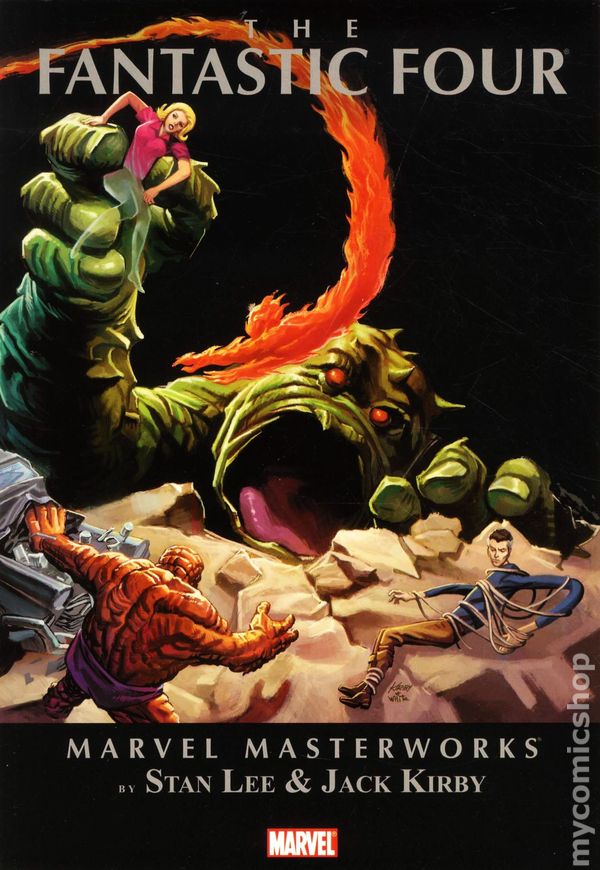 Fantastic Four Masterworks, Volume 1, by Stan Lee and Jack Kirby – The Fantastic Four marked the beginning of Marvel Comics’ glory days in the 1960s, bringing back superheroes for a new era. A scientist, his best friend, his girlfriend, and her brother go into space and are given superpowers by cosmic radiation. Back then, radiation was basically an excuse for magic, even though it gave people cancer much more often than it did supernatural abilities. The Four don’t maintain secret identities, and only started wearing special outfits once readers demanded it. It’s strange how often the group disbands in just the first few issues, with Ben Grimm often fighting his teammates and storming off (probably not helped by the fact that even his best friend tends to call him “Thing”), and Johnny Storm’s hotheaded attitude getting him in trouble as well.

I was also struck by how meta-referential they often were right out of the gate. Marvel Comics exist within this universe, and at one point Doctor Doom shows up to menace Lee and Kirby themselves.

If they’re writing about real people, why do they need to create villains?
At one point Johnny finds an old comic about Namor the Sub-Mariner, a super-powered villain and sometimes hero from the 1940s, then finds an amnesiac Namor himself in the same building.

I guess he kept the comic as a memento? Johnny also once compares Ben to the Hulk, another new character who was introduced around the same time, although it would be a while before they actually met (i.e., not in this volume).

Namor makes several appearances, being established as having a thing for Sue, and while she doesn’t quite return his feelings she does sympathize with him. Other villains making their debuts here are Doom himself, the Mole Man, the shape-shifting alien Skrulls, and the Puppet Master. The latter is the stepfather of a blind woman named Alicia Masters who becomes Ben’s love interest, and also looks a lot like Sue. I’m assuming she went blind from looking at her stepfather’s face.

I haven’t seen any of the FF movies, by the way. From what I’ve heard, none of them are all that good.