You Got Live Action in My Animation!

One thing I wanted to mention about the most recent Simpsons episode was the use of live action footage. Principal Skinner forces the students at Springfield Elementary School to sit through all 152 minutes of the 1967 Doctor Dolittle, and we see bits of the actual movie. It seems like this isn’t something the show would have done in its earlier days, when everything was animated. The only early exceptions I can think of were in Halloween episodes, like when Homer fell out of the third dimension into a live-action street, and when an animated Bart and Lisa ended up with a live Regis and Kathie Lee.

The Christmas episode “‘Tis the Fifteenth Season” had the characters watching television specials using stop-motion puppets and Claymation, and they actually used these styles of animation instead of just drawing them. 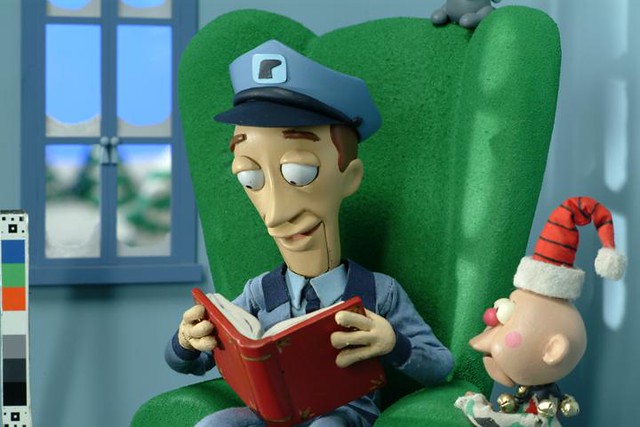 It looked weird, but it was cool that they were able to make the parodies appear more accurate. By using footage from an actual movie, they were able to joke about specific scenes without having to animate them, which worked, although you could potentially argue it was a little bit lazy.

I’d actually been reading about Who Framed Roger Rabbit on TV Tropes recently, and that ties into this. Mixing live action and animation was certainly nothing new by the late 1980s. The full-length Disney features that used both tended to use the cartoons in imaginary or fantastic scenes, like inside a chalk drawing in Mary Poppins, or on a magical island in Bedknobs and Broomsticks.

Disney’s Alice Comedies from the 1920s had a live actress in a cartoon world, and there were scenes of Mickey Mouse and Donald Duck interacting with live-action people in Fantasia and The Three Caballeros, respectively.

Warner Bros. did something similar with Daffy Duck and Porky Pig in a 1940 short. The idea that cartoon characters are actors playing roles was used since the early days of animation, and Roger Rabbit expanded upon this idea, also making Toons a persecuted minority of sorts.

I’ve seen the question raised as to whether there are any animators in the Roger Rabbit world, but it’s never addressed. Although a Disney production, the film included cartoon stars from other companies, including the only official scenes with Mickey and Bugs Bunny together.

I’m not sure how true it is, but I’ve read that Judge Doom’s plot to buy up streetcars and put them out of commission, based on an accusation against General Motors for doing the same thing, was going to be the plot of a Chinatown sequel before it was used here instead. There already were freeways in 1947, but I think they’re allowed a little artistic license. They also had Eddie Valiant and Roger watch a Goofy cartoon that wouldn’t come out for another two years.

The animated series Bonkers, aired as part of the Disney Afternoon, used much the same premise as Roger Rabbit, and its lead character Bonkers D. Bobcat was a lot like Roger. The common rumor is that Disney had wanted to do a Roger Rabbit series but couldn’t clear the rights, but apparently such was never the case, and it was just heavily inspired by the movie. Of course, since there’s no live action in it, it’s harder to tell the difference between Toons and humans. For the most part, the human characters are just less colorful and zany, and are drawn with five fingers instead of four. While we get the idea, and I’m sure they didn’t have the budget to put in live actors, it’s not as much fun to watch. One odd thing about the show was that Bonkers had two different partners, and there were clear differences in style between the Lucky Piquel and Miranda Wright episodes.

While the Lucky episodes aired first, the Miranda ones were actually made first, and delayed because of poor quality. A good number of them were never aired at all. So instead they brought in Lucky, who in many ways was basically a G-rated Eddie Valiant, making the connections to Roger even stronger than before. A two-part pilot launched the show, and another episode made a transition between the two partners, making it clear that the Miranda episodes officially took place after the Lucky ones. I understand that they stopped showing that episode after the Oklahoma City bombing in 1995, as the main villain was a terrorist bomber. While the show was never that great, it had its moments, more so in the Lucky episodes. The Miranda ones did feature Bonkers’ co-stars from the shorts shown on Raw Toonage; they were only in the first and last Lucky episodes. 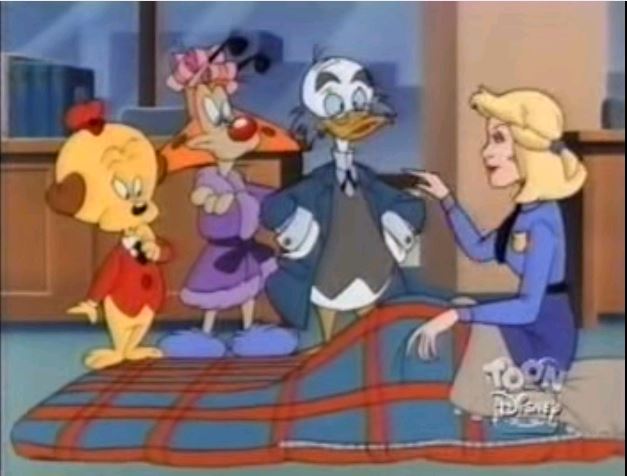 Also, Chief Kanifky, a minor presence in the Miranda episodes, became a major character in the Lucky ones.

I remember thinking that Fall-Apart Rabbit, Bonkers’ friend and stunt double when Lucky was his partner, had a similar to voice to that of the dog Runt on Animaniacs, which in turn was based on Dustin Hoffman in Rain Man. Frank Welker did voice both characters. I read that Bonkers was a proposed name for Animaniacs, which is part of why the latter show took a fair number of shots at the former. Animaniacs is a better title, though, so they really dodged a Toon bullet there.

4 Responses to You Got Live Action in My Animation!