Is This Truly the Future?

Yesterday was the day in which Marty McFly arrived in the future in Back to the Future Part II, despite altered graphics saying otherwise. I never really understood what the point of the Photoshop jobs was when the actual date was coming up pretty soon anyway, but trolls aren’t always that easy to figure out. As you might expect, a lot of sources picked up on the actual date, and some movie theaters showed the entire trilogy. Beth and I went to the United Artists on Crown Street to see them, and it had been a while since I last did. While the first one is easily the funniest, I have a soft spot for Part II because it came out at a time when science fiction visions of the future were an interest of mine.

I still kind of think of The Future as being bright, shiny, flashy, and automated, with lots of flying going on, even if I think the ACTUAL future is likely to remain kind of run-down except when someone has a lot of money and wants to impress people. With a lot of the stuff we see in the movie, the issue isn’t that we don’t have the technology, but that it just isn’t practical. Flying cars sound really cool, but can you imagine how difficult it would be to maintain traffic in the air? And a self-drying jacket would have to be expensive, hardly the sort of thing Marty Jr. was likely to own.

The filmmakers have said that they wanted to go with what was funny or cool-looking over a realistic vision of the future (which they almost certainly would have gotten mostly wrong even if they HAD taken it more seriously), not to mention that we were mostly seeing futuristic versions of the same buildings we’d seen in the Hill Valley of 1955 and 1985.

I really wish they could have spent more time in the future, although I can see why they wouldn’t necessarily want to.

The ending of the first movie kind of backed the writers into a corner in certain respects: that Jennifer was in the car with Marty and Doc, that it had to involve an attempt to help Marty’s kids, and that flying cars and cold fusion would have to exist. Technically, it was possible that Doc had gone even farther into the future to obtain the hover conversion and Mr. Fusion, but placing these things thirty years in the future maintained symmetry. As it was, Jennifer was largely (but not entirely) written out, and there were some holes in the plot. Marty has to save his son who was arrested due to an event on this one particular day. Okay, but as Richard Dreyfuss’ sons point out, couldn’t Doc have just warned Marty about this without taking him into the future? Sure, Marty couldn’t have watched his son all the time, so he might still have gone along with Griff, but Doc could have then gone back and tried again. As I mentioned here, however, the problem wasn’t so much this in and of itself so much as that combined with Marty’s life falling apart after he gets in a car wreck. Why wouldn’t Doc warn him about this? He must know, as he mentions it in Part III, only to then refuse to tell Marty any details because he could potentially make things worse. By that point, Doc is more worried than ever about changing the future after Biff changes history, but why not deal with that BEFORE trying to save Marty Jr. in 2015? After all, maybe a Marty who hasn’t basically given up on life would be a better father. But then, this is tied in with Marty’s character trait of going along with anything, including breaking the law and endangering his own life and those of his loved ones, if someone calls him a chicken. Not only is there no hint whatsoever of this in the first movie, but it makes the character a whole lot dumber and more arrogant, sometimes unbelievably so. Even if we do accept that Marty has this problem when he’s seventeen, he still has it thirty years later? I guess I’ll have to go along with this article in that the films are basically promoting the idea that nobody changes significantly after high school, which is really quite depressing.

While it’s pretty much impossible to write a time travel story without some plot holes, these films mostly stick to the idea that changing the past is not only possible but pretty much inevitable for time travelers. Which is why it’s kind of weird when the films throw in elements of fate and possible closed loops. Okay, by going back in time and getting his father to stick up for himself and Lorraine rather than her just marrying him because she feels sorry for him, he improves his family’s lives. Despite this, however, they still have the same kids at the same times, and give them the same names. This is especially odd considering that there’s an indication Marty’s parents name him after himself, even though he had that name BEFORE he went back in time, and they still waited to give it to their second son. I guess some things just happen due to density. I mean, destiny.

Even stranger is how Chuck Berry hears Marty playing “Johnny B. Goode” over the phone, suggesting that the song might not exist if Marty hadn’t gone back in time. If that’s the case, though, how did Marty know it in the first place? And how would Berry have duplicated the entire song after having heard only a little bit of it? Presumably fate has determined that “Johnny B. Goode” must exist. I’m not sure whether that has anything to do with George McFly marrying a woman who looks just like his great-grandmother, however. 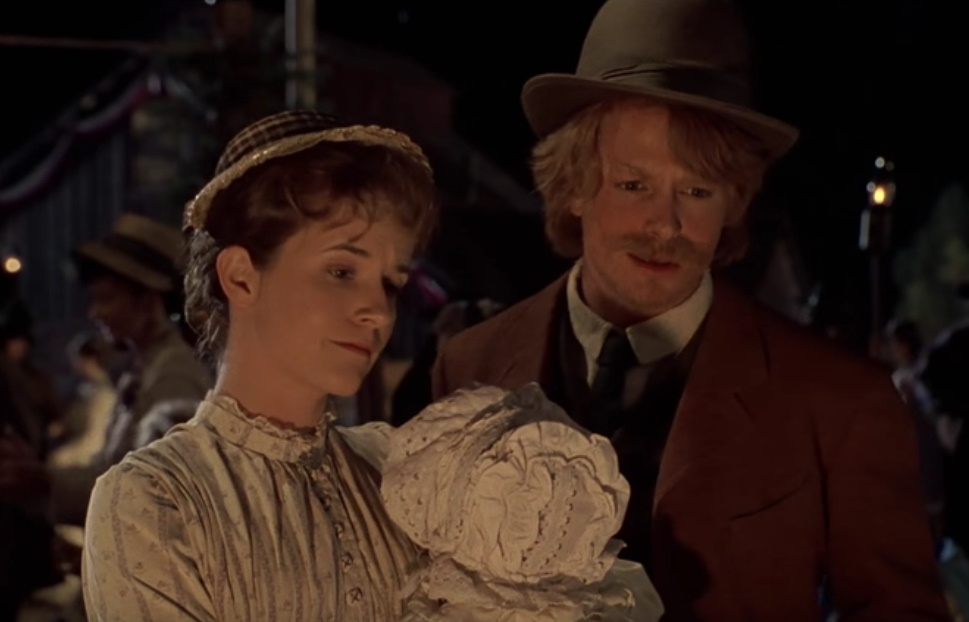