I’ve checked out some of the Mega Man comics from Archie, specifically the collections of issues one through four and nine through twelve. I have the volume in between these two, Time Keeps on Slipping, on order from the library; but their only copy appears to have never been returned by someone who checked it out last year. The third collected volume, The Return of Dr. Wily, is an adaptation of Mega Man 2, including a lot of elements from that game. In addition to the eight new Robot Masters, there are appearances from the Mecha Dragon, the Guts Dozer, and the holographic alien Dr. Wily. 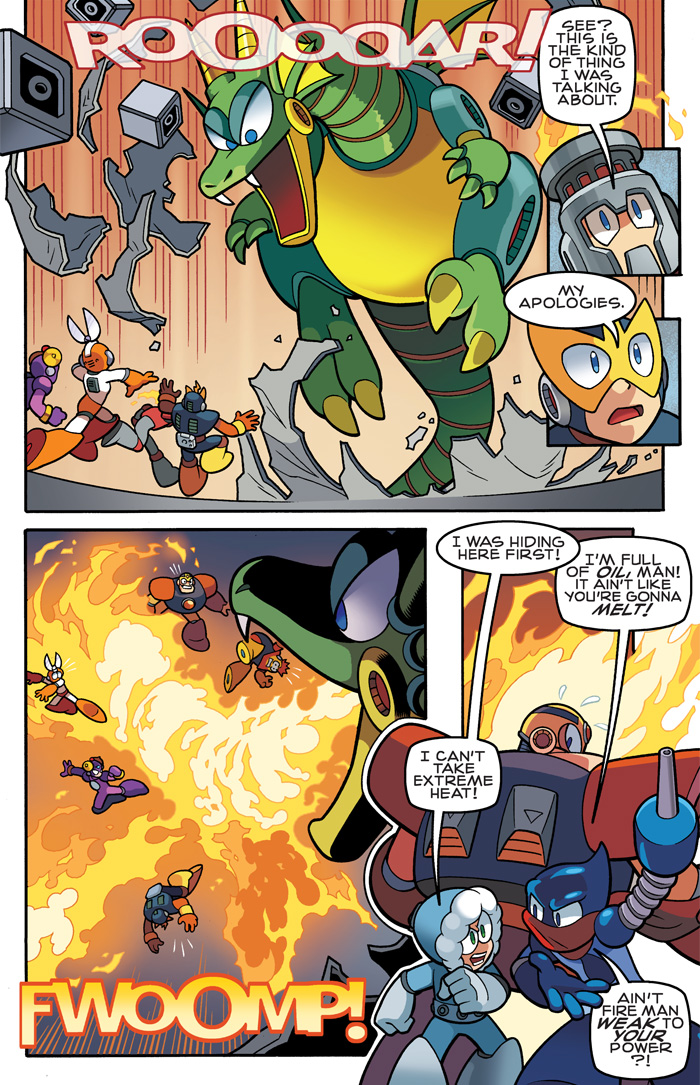 Not adapted is the bizarre ending of that game.

It ties in with the beginning, which starts with the very simple story: Mega Man battled the Robot Masters reprogrammed by Wily, but Wily then tried to get his revenge by building eight new ones. It’s the standard story for these games. While the first game is set in the year 200X, MM2 takes place the following year. Assuming the X stands for a digit, this would now be in the past, sometime between 2000 and 2009. This kind of thing is common in video games. Mega Man 3 takes place in 20XX, and Metroid in 20X5. Hey, could that be this year? Presumably not, since this is a year “in the history of the cosmos,” rather than AD. Maybe they’re the same, but probably not. Unless Samus stopped by in 2015 to borrow Doc Brown’s time-traveling DeLorean.

Anyway, the brief story is followed by a pan up the side of a tall building to see a Mega Man with no helmet standing on the roof.

When you start the game, the helmet appears and he teleports off. I’m sure you know how most of the plot works even if you’ve never played a Mega Man game: the super fighting robot battles eight Robot Masters in their bases and takes their weapons, then proceeds to Dr. Wily’s laboratory to kick his ass. After the first fight with the doctor, the floor falls out and Mega Man ends up in the dingy basement of Skull Castle. There’s no music and no enemy robots are patrolling the area, but there is acid dripping from the ceiling. You encounter Wily again behind the standard automated vertical gate, only this time he turns into an alien.

The alien can’t be harmed by any weapons other than the Bubble Lead, and if you do bubble it to death, it turns out to be just a holographic projection. It would make a little more narrative sense if Mega Man had to shoot Wily’s hidden control panel, which is more or less what happens in the comic, but I suppose the holographic device isn’t waterproof. The mad scientist must have used up his rust proofing when building Bubble Man. For that matter, is everything Wily builds weak against a weapon he’s also made? Maybe that’s a failsafe in case something goes wrong.

The real Wily begs for forgiveness, and I guess Mega Man grants it, as we don’t see the doctor going to jail until the sixth game. The scene then shifts to our hero walking along, while a box on the left shows a country scene with a few houses in all four seasons. As the scene changes, so do the precipitation in the background and Mega Man’s color. All of these colors are ones he uses during the game while equipped with different weapons, but they also match well with the seasonal colors.

Then he looks over at the houses, and the scene expands to show just Mega Man’s helmet lying on a hill. This links to how he isn’t wearing it at the beginning, but it’s unclear why he leaves it.

While I never read the Worlds of Power novelization of the game, I did glance at it while in a bookstore to see if it covered the ending. It actually did, saying that Mega Man was remembering his home in the country as it looked throughout the year, then casting off his helmet upon getting close to it. The thing is, depictions of the outside of Dr. Light’s lab in later games do often show it in a rural location, although the building itself doesn’t look much like the ones in the MM2 scene. 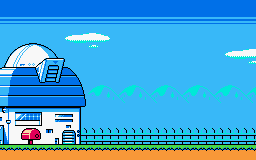 This ending is listed here as one of the most irrational video game endings, while the author of this article regards it as one of the best. There’s also some discussion of it here, including a mention that some people initially thought it meant Mega Man had died!

In addition to the helmet bookending the game, there are several other contrasts involved. The opening shows the hero in a city while fast, engaging music plays. At the end, he’s in the country, accompanied by sad, pensive music. But then, the whole game (and, for that matter, the series as a whole) is full of weird contrasts. Dr. Wily’s high-tech lab has elements of a Gothic castle (wonder if he and Doctor Doom have ever compared notes), and he built a robot out of wood.

Based on what others have said, it perhaps represents Mega Man returning home from war, removing the helmet that he only seems to wear when fighting. Most of what I’ve read about Mega Man’s back story is that he was built as a lab assistant and a sort of son to Dr. Light, and was only modified to use weapons when it was necessary to stop Wily. To himself, he’s more Rock than Mega Man. He’s an introspective robot with genuine emotions, even though we mostly just see him when he’s blasting other automatons. But then, the powerful warrior who also appreciates solitude and nature is a common Japanese archetype. And if you don’t like this ending, you can blame Fish Man.