My wife is a big fan of horror movies, and while we watch them throughout the year, she particularly likes to concentrate on them just before Halloween. So here are the horror and horror-adjacent films we saw this October:

Bride of Re-Animator – The follow-up to the original Re-Animator continues to stick loosely to the story it’s based on, which H.P. Lovecraft considered one of his worst, and was more or less a Frankenstein rip-off. Jeffrey Combs returns as Herbert West, inventor of a reagent that can bring the dead back to life. The title is a misnomer, as not only does he not get married, but nobody does. Instead, he revives his partner’s old girlfriend, and as expected it doesn’t go well. Also, there’s a disembodied head that can hypnotize people and fly around with bat wings.

V/H/S – The frame story involves a group of criminals breaking into a house that contains a stash of weird video tapes, and most of the movie consists of what’s on the tapes. One has some guys bringing back girls for an amateur porn video, and one of them turns out to be a succubus. Then there’s a couple staying at a motel in the mountains that’s apparently being followed. The third takes place in the woods, with a killer who manifests himself as bad patches on the tape. A collection of video chats reveals a program to breed alien babies using human girls as carriers, and some men bound for a Halloween party stumble upon a black mass. Some of the segments are slow, but I like how they stuck to the premise of things that would have been recorded on video. This was the rare horror film that I liked more than Beth did, although she does love referencing the succubus’ dialogue.

The Hand That Rocks the Cradle – When a woman has a miscarriage and her husband commits suicide after being convicted of molesting women, she for some reason decides to take revenge on the person who reported her husband, who also happens to be a new mother. She tries to win over the kids, frames the mentally retarded gardener (played by Winston from Ghostbusters) for child abuse when he sees her breast-feeding the baby, sews mistrust among the woman and her husband, and eventually tries to kill them. It’s a little unrealistic how she manages to hide her identity for so long, and how she’s found out because she decorates the room in her employers’ house the same way as the one in her old home. You’d think she’d be a little more careful about such things, but then, she IS clearly totally mentally unhinged. It’s a pretty effectively creepy movie overall.

Alien – This counts as horror, right? It’s horror with a science fiction theme. This is one of those films that it seems like everyone but me (and Beth) had already seen, and I’ve seen the famous parts referenced or parodied so many times that they’re not as effective as they otherwise might have been. I still liked it, but I mostly just feel a sense of accomplishment for finally having watched it.

It Follows – Actually from earlier this year, it involves a shape-shifting being that will slowly but surely follow people wherever they go. It’s also sexually transmitted, so having sex with someone will mean that it starts following them as well, and further detains it from following you. It doesn’t stop it entirely, though, so it seems to be more a case of wanting other people to suffer with you. From what I’ve heard, it wasn’t intended to have an anti-sex message, which kind of makes me wonder why that element was in it at all. It was inspired by a dream about being followed, and I’d probably say it’s most likely about the inevitably of death, which will always get you in the end. An oddity of the film is that it features high school students whose parents or guardians never seem to be around. To be honest, I mostly just found it confusing. 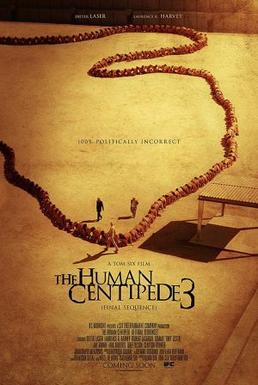 The Human Centipede 3: Final Sequence – A few years ago, Tom Six made a film based on the absurdly disgusting idea of linking people together by their digestive tracts, then proceeded to make two other movies about the first one. In Part 2, the main villain was a guy who watched the first movie and then tried it for himself. This time, both of the first two movies are fictional, but their stars reappear as different characters. Dieter Laser is a sadistic prison warden and Laurence Harvey his much put-upon accountant who suggests forming the prisoners into a human centipede. Six appears as himself, and he totally loves the idea. The actual surgery doesn’t happen until fairly late in the movie, which makes sense as we’ve seen it before. Instead, it focuses on other gross-out elements, mostly involving the warden character. He pours boiling water on one prisoner’s face, personally castrates another and then eats his testicles, has dried human clitorises as a snack, constantly screams racist epithets, and forces his secretary to be his sex slave. He also speaks Southern-accented English when German is his first language, leading to some very odd inflection, although this is addressed in the movie by saying he’s a German immigrant. As expected, it’s quite disgusting, but so over-the-top that it really can’t be taken seriously. It also appears to be quite heavily based on European stereotypes of Americans.

1 Response to Month of Macabre Movies