My wife, who enjoys making me watch things I find uncomfortable, directed me to the trailer for God’s Not Dead 2, which for some reason isn’t called God’s Still Not Dead.

Really, that’s a pretty bizarre title anyway. It’s pretty much understood that immortality is part and parcel of divinity, although I wouldn’t tell that to Baldur.

Atheists don’t think God existed in the first place, not that he once did and then stopped. Actually, mainstream Christian belief has it that Jesus was fully God, and that he died on the cross. So presumably God CAN die, but won’t stay dead for long. Friedrich Nietzsche famously said that God is dead, but I don’t think that was meant to be taken literally.

After all, he also said, “What does not kill me makes me stronger,” when there are in fact many things that leave people much weaker but not dead. From what I’ve seen, Nietzsche actually meant that religion is no longer a valid source of absolute morality.

Georg Wilhelm Friedrich Hegel actually used essentially the same phrase before Nietzsche did, and the 1863 poem that would become a carol “I Heard the Bells on Christmas Day” includes the line “God is not dead, nor doth He sleep.”

There was something called the Death of God Movement in the 1960s, whose main teaching seemed to be that God was never actually alive in the sense that we recognize the idea. A 1966 issue of Time Magazine bore the headline “Is God Dead?”. 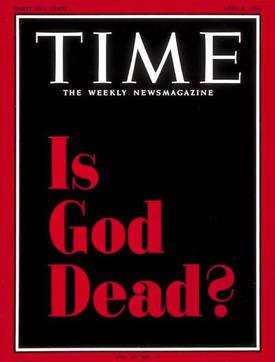 This was likely the inspiration for a line in Elton John’s “Levon,” although Bernie Taupin obviously fudged the details quite a bit. It wasn’t in the New York Times as far as anybody knows, it wasn’t when a war started, and Levon being born in 1966 would have made it impossible for him to have his own son when the song came out in 1971. So the phrase has a lot of history, but is it really something all that common these days? Considering how out-of-touch the films are, I’m guessing it isn’t.

I’ve seen the first God’s Not Dead sold at Walmart, along with some other super-preachy Christian movies. I can’t say I’ve watched it (I don’t have the patience of a saint, after all), but it’s part of a general trend of films geared entirely toward people who believe what they do. Sure, they make a show of wanting to convert others, but their arguments are never at all convincing. Perhaps the most famous movie of this sort was The Passion of the Christ, which I did see, and which essentially seemed to be saying that you should be a Christian because Jesus was treated really badly. Dude, I can feel sorry for someone without thinking they’re my personal savior. Then there was that anti-evolution movie where they somehow managed to recruit Ben Stein, who is Jewish, as the narrator. Hey, a paycheck is a paycheck, but he definitely lost some clout for that among people who disagreed with his politics but still thought he was entertaining. From what I can tell, God’s Not Dead combines the idea that American Christians are persecuted with public universities being brainwashing factories. A professor, played by Kevin Sorbo, makes his students sign a pledge saying that God is dead. Obviously this would lead to lawsuits in real life, but apparently secular professors can get away with anything in this alternate universe. The second has a teacher played by Melissa Joan Hart agreeing with a student who says Jesus was a good example of non-violence. I’m not sure the money changers in the Temple would agree with this, but obviously mentioning that Jesus was a pacifist isn’t preaching. Still, she gets in trouble and ends up going to court, or something. You can’t always figure out the exact plot from a trailer. All I can figure is that, since religious institutions are known to practice censorship and repressive policies, public schools must do the same thing from the alternate perspective. It also sounds like there’s anti-ACLU propaganda, when that’s the group that often defends Christians who feel they’ve had their rights violated. Also, “the most basic human right of all is the right to believe”? You mean, like, above food and shelter? Oh, wait, we’re dealing with conservatives here. When you have to resort to arguing against a position that doesn’t really exist, your argument probably has some major flaws. Clarissa isn’t actually explaining anything!

By the way, I understand Sorbo has said his being an outspoken Christian has limited his ability to find acting work. Well, either that or the fact that most people only know him from an intentionally campy television show. For that matter, why would a son of Zeus be so adamant in support of a rival deity?